Comedy is a very tricky genre to get right. Even more so, when attempting to capture a global audience, as tastes can vary along with language. “Shaolin Soccer” broke out and became one of these rarities by both embracing what made Stephen Chow a star in Hong Kong but also filtering out some of the more localised humour. The globalisation and pan nationalism that the region saw develop in the late 1990’s resulted in movies with a broader international appeal develop. What we have here is a focus more on visual humour that would play better in foreign markets and less of the Cantonese wordplay that wouldn’t. 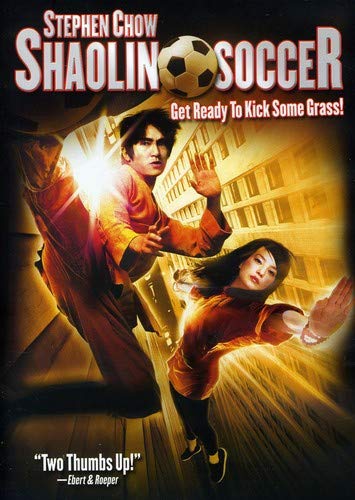 Sing (Stephen Chow) is a monk out to promote the virtues of martial arts. Teaming up with Fung (Ng Man Tat), he tracks down his former martial arts brothers to create a football team to compete in a cup competition. Also competing is a team owned by Hung (Patrick Tze) who was responsible for the crippling of Fung when he was a promising footballer. Along the way, they meet a baker Mui (Zhao Wei) who despite her physical appearance, is a Tai Chi master. As the team progresses in the competition, obstacles are thrown at them from all sides and Hung seeks to stop them.

We see a different side to Stephen Chow in this movie. His standard character is an arrogant money/success obsessed charlatan that falls to be redeemed by the closing credits (see “Kung Fu Hustle” as a classic example.) Here, the protagonist is more naive but crucially likeable presence.

There is less mockery and pop culture references that would localize the movie. Instead, the references are broader with the best example being the goal keeper morphing more and more into Bruce Lee, a reference that is easier to pick up on internationally.

The jokes come thick and fast, breaking the 4th wall on occasion. The key element being it is simply fun. There is a genuine respect for martial arts amongst all the mirth, with surprisingly practical applications of their usage, especially with Zhao Wei’s Tai Chi baker. The gang that feature in one of the film’s funniest scenes are redeemed by joining the monks’ team again, showing a respect for the spiritual side of the arts.

Importantly though, is it funny? The short answer is absolutely. From the very opening, we have some of the best visual gags seen in a Hong Kong movie. The absurdity of these out of shape monks being able to perform incredible feats leads to some fantastic sequences. The 1st match where they regain their prowess is full of crazy humour and genuinely hysterical.

No good movie can exist however without a good villian and in Patrick Tze, we have a suitably loathsome one, playing on his career history of suave menace constantly smoking a huge cigar, overconfident and unbearably smug. The perfect antagonist.

Ng Man Tat is as ever on board to be the other half of the double act, playing it straight as everything circles around him. Zhao Wei gets a nice albeit odd role as Mui. Continuing the theme that surface appearance hides hidden depths, her character goes through several changes in appearance before finding acceptance in herself.

The rest of Stephen Chow’s regular supporting cast fill out the roles of the monks. Each has their own stand out comic moment that shows the generosity of Stephen Chow as filmmaker and allowing others to shine.

As a director, Stephen Chow has a good handle on the material. A life long martial arts fan and exponent, he embraces the project and keeps himself under control. The tone is consistent, the CGI effective and knowingly so. The score is tappingly upbeat and laughs are plentiful.

In short, simply one of the best comedies ever made……it’s as simple as that.