In his second part of an informal trilogy, director Li Yang critiques the patriarchal structures within the rural China. In 2003, his debut feature-length film “Blind Shaft” depicted the grim realities of the mining industry in his country of origin. To the director’s surprise, it was banned from release in China. The rebel director came back in 2007 with “Blind Mountain”, and in 2018 he managed to finish the trilogy with “Blind Way”, which focused on the problem of child beggars. 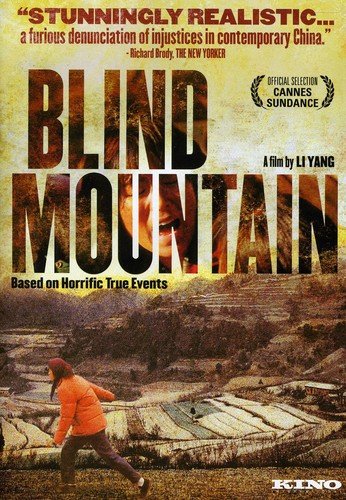 “Blind Mountain”uses documentary aesthetics to tell the story of young university student Bai Xuemei (Lu Huang). It opens with a scene of her in a bus driving into the region, and this is actually the last time we will be able to see her fully free and mobile. A couple of sequences later, she is kidnapped and sold as a wife to a backward family in a remote village. The narrative largely focuses on her life in isolation and her futile attempts at escaping from the domestic prison. Yet, Li Yang’s ambitions are to not only tell a moving crime story, but also to depict rural China of the 1990s.

The pace of the story is deliberately slow, in order to emphasise the sense of boredom and helplessness of the protagonist.  The viewer witnesses her many attempts at escaping from the house of her new “family”. What’s left unsaid, but is actually an essential context to the plot of “Blind Mountain” is obviously the One-Child Policy imposed by the Chinese government. The film is set in 1990s, and the director lets the viewers connect the dots themselves. It is because of the infamous policy that an economic demand for wives is created. Due to the practice of infanticide, a disproportionate number of males is being raised in the village.

Thus, although the director clearly wants the spectator to sympathise with the protagonist, there is also a subtle explanation for the absurd behavior of the community. Furthermore, the issues and interrelations between supply and demand, money and body or public and private are interweaved in “Blind Mountain”. The transition from the full on communism to the new logic of capitalist mechanisms seems to shake up the rural community Li Yang depicts.

There are many visual links that the director leaves for the viewer. The theme of slavery and commodification of bodies of both women and animals is an especially moving one. What’s more, “Blind Mountain” subtly tackles the pressure put on men to perform feats of their masculinity, where having a son is the would-be proof of their aptness.

The film is predominantly shot in a raw, documentary style, with many of the takes done with hand-held camera by the cinematographer Jong Lin. Cold and overwhelming landscapes, especially ones with the eponymous snow covered mountains, are correlated to Bai Xuemei’s mental landscape. Another interesting element is the intentionally jarring and abrupt editing, by Li Yang himself and Mary Stephen. It often feels elliptic or anti-emotional, as if the director tried to look away from the most moving or brutal events. The worst things Bai Xuemei goes through often take place off-screen, but they still remain powerful, as the viewer knows just enough to deduce what happened.

“Blind Mountain” is a frustrating piece of narrative which depicts how the one-child policy haunted the rural communities of China. The rebel director does not pull any punches with this film which recreates the grim realities of the country.