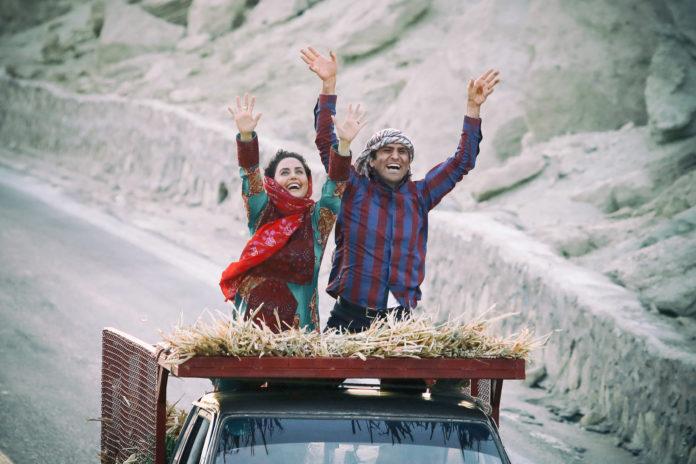 The Audience Award of PÖFF | Tallinn Black Nights Film Festival went to the Iranian drama “When the Moon Was Full” directed by Narges Abyar. Based on a true story about the marriage between Hamid (Hootan Shakiba) – brother of the dispiteous leader of the terrorist Islamic group Jundullah (God’s Army) Abdul Malik Rigi (Armin Rahimian) and a young unsuspecting Iranian woman Faezeh (Elnaz Shakerdust), this is a film that evolves into a thriller with lots of teary pathos.

It’s love at first sight for the shop assistant Hamid and his shy customer. Not long after their first encounter at the bazaar he is – accompanied by his parents – asking for Faezeh’s hand from her mother Esmat (Shabnam Maghdami). The proposal doesn’t go as smoothly as the groom-to-be was hoping for; Esmat is worried about the cultural differences between two love birds, and even more so about the possibility of her daughter moving far away. Her only condition for giving a consent is that the two should live close to her. Everyone seems to be happy about this arrangement apart from the groom’s mother Ghamnaz (Fereshteh sadre Orafaiy) whose face is shadowed by deep worries. She attempts to warn Faezeh with a simple “he’s not a man for you”, an advice that hasn’t worked since Adam sank his teeth into the apple.

Only after meeting the rest of her husband’s brethren, Faezeh will understand that she wasn’t married into a calm, average family. Their first dinner in mother-in-law’s home is interrupted by the arrest of one of Hamid’s brothers who’s accused of collecting weapons and money for jihad. What was supposed to be the beginning of a nice honeymoon turns into a premonition of a much bigger disaster. Up to the arrest, Faezeh had simply had to put up with the unpleasant remarks about the way she covered her hair, but after the incident, she starts noticing the signs of true trouble.

The arrested brother turns out to be mama’s little handful compared to the rest of the Rigis. The eldest of them Abdul Malik is a religious fanatic with a huge following, and he’s slowly transforming all but his mother into brainwashed Islamists.

“When the Moon Was Full” is a film that could have been emancipatory if it tried harder. Abyar doesn’t reduce women to helpless weak creatures that need to be saved by strong men, but he portrays its bleakest character Hamid – a spineless, weak man, as a poor broken soul that simply has to kill his wife because he’s too embarrassed to look her in the eye. In conclusion, leaving his own children motherless isn’t as heart-breaking as his wounded ego. Even if that particular detail is biographical, romanticizing femicide doesn’t do justice to the film, particularly not to the effort on the level of female rebellion. Other than that, the chauvinist behavior portrayed in the Pakistani stronghold of Jundullah shows how the miseducation of kids serves the purpose of an extremely conservative society in which women have no say. That particular part of the narrative is masterly developed.

Although plenty happens, there should be a much better reason for this film to stretch over 137 long minutes. All the good ideas, lovely costumes and set design by Mohammad-Reza Shojaie can’t compensate for the time lost on whaling, shouting and sobbing.

For a film that is set up against the backdrop of one of the most spectacular arrests of terrorist leaders in the relatively recent past, “When the Moon was Full” fiddles too much with “Herzschmerz”. Despite of its flaws, this is an important film.