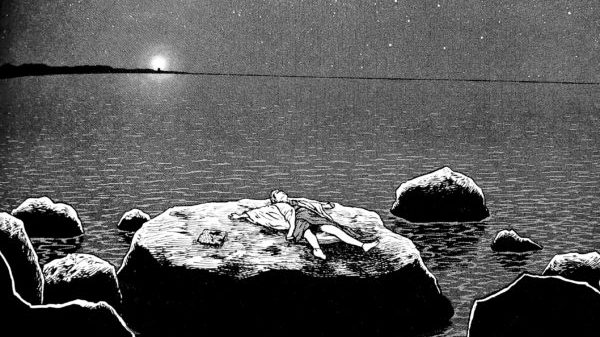 “Plagued by a maddening anxiety, the terrible disconnect between his own concept of happiness and the joy of the rest of the world, Yozo Oba plays the clown in his dissolute life, holding up a mask for those around him as he spirals ever downward, locked arm-in-arm with death.” (Viz Media) 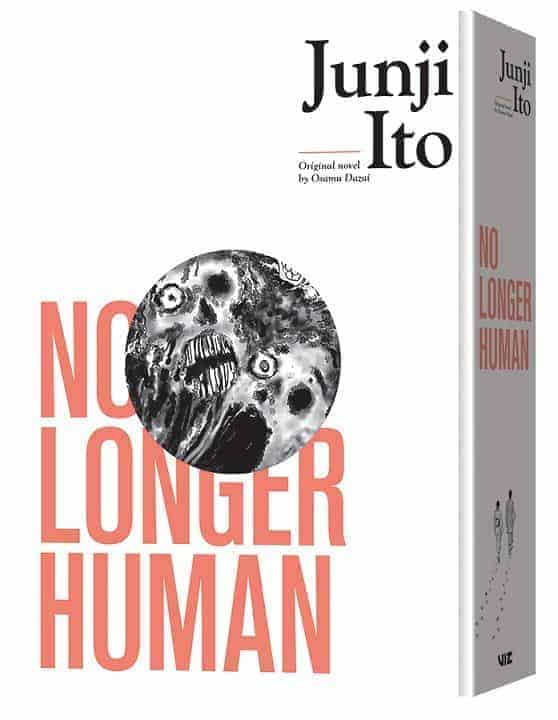 Before discussing the manga, I feel it is important to note that I went into this being familiar with Ito’s work, and only knowing Osamu Dazai through other media references. As a result, my critique will only reflect Ito’s work and not touch on any comparisons to the source material.

To quickly touch on the quality of the release, Viz Media has given Ito’s work a new life, with the last several collections of his work being bound in hardcover and on superior paper stock. The collected edition of “No Longer Human” is the first to sport a dust jacket, that when removed exposes larger art pieces taken from the pages. This is always a nice touch, which appeals to many collectors of hard cover books. This edition also offers up a few colour pages in a well chosen soft pallet. Overall, Viz offers up a great first impression of this edition and quality alone makes it a great addition to any manga library.

The story of Yozo Oba is one of indulgent self hatred pushing the protagonist into a morally appalling action. Oba’s path of self defeat starts in his youth after suffering sexual abuse from family staff. Unsurprisingly, this forces the protagonist to shrink inward and learn to adapt to become unnoticeable, as any attention makes him uncomfortable. His approach is somewhat unique, in creating an outward persona that is loving, and willing to bend to others’ needs of him. However, this approach draws in many unstable people into his world, as his feigned empathy finds him constantly adored by women, and admired by peers. Oba’s interaction turns consistently tragic as his actions act in contradiction of his misanthropic beliefs. This disconnect always ends in disaster, as when relations become too intense, Oba flees into a selfish form of self survival.

It becomes easy to see Yozo Oba as a deplorable human being, but the degree of self awareness and constant vision of ghosts from the past adds a degree of sympathy. His struggles through addiction, suicidal attempts, and failure certainly take a toll, and the character’s degeneration of health and mind reflects regret at his deplorable actions. Yozo Oba becomes a fascinating character study, in someone who has lost all humanity and carries the weight of his misdeeds. The portrait of a man on a slow collision course with death makes for a truly disturbing read, and there are plenty of moments that punctuate the depravity of a broken mind. Overall, “No Longer Human” is an apt title, in the sense that Oba has lost the qualities one would use in expressing humanity towards another. At the same time, in order to make the statement that an individual is ‘no longer’ anything, it requires a degree of understanding of what has been lost or abandoned in order to carry the connotation of disappearance.

As engrossing as the story of Oba is, that is not to say that the rest of the characters have much of an impact. In particular, the women that Oba counters seem rather anachronistic and simple. Given the time period of the original release of the work, as well as being a fictionalized semi-auto-biography of Dazai’s life, this can be forgiven to a degree. However, no women in the novel are of strong character, easily succumbing to mental illness, violence, or anger. It becomes a bit frustrating, with every character outside of Oba acting more to egg on his decline than become an expression of the humanity he desperately seeks.

Junji Ito’s art is extremely complimentary to the story, given his knack at both body and cosmic horror, as scenes of sickness and haunting imagery meld in a nauseating fashion. With the amount of sex in the manga, it also sees Ito, for the first time, focusing largely on grotesque sexual acts. Both amazing and disturbing, the body distortions and hallucinations of sexual nature become nightmarish under the mangaka’s art style. The attention to detail in Ito’s work has always been fascinating, as he will spend hours on a single panel, just to perfect the image he has in his mind, and the attention to detail is made apparent throughout the novel. With the exploration into new themes, “No Longer Human” acts as one of the mangakas’ most engrossing visual work.

I will admit to being part of Ito’s rabid fan base, and am quick to tout him as not just one of the best horror mangakas’, but one of the greatest minds working within the medium of terror. With that said, I don’t unabashedly enjoy all his work, as his deviation into comedy I have found tedious, and his previous adaptation of “Frankenstein” to be rather dull. However, “No Longer Human” was really impressive in both narrative strength and visual storytelling.

Outside of his adaptation of “Frankenstein” Ito’s brand of horror is not heavily reliant on character building, as most of his work is similar to Lovecraft’s brand of ‘cosmic horror’, where the protagonists’ personalities become irrelevant to the otherworldly horror that is being forced upon them. In seeing Ito excel so greatly in a character driven manga is going to be a deeply rewarding experience for fans of his work. All the while, the strength of the story and visuals should appeal to those just discovering his work for the first time. An amazing read and stellar physical edition make this an ideal addition to any book collection.