Part of a very successful franchise that also includes a manga and an anime, “Bunny Drop” takes a lighter approach to the family drama genre.

Daikichi Kawachi is 27 years old, single and a successful businessperson, but without being very rich. At one point, he returns to his family’s house, that he has not visited for a long time, to attend his grandfather’s funeral. Once there, he discovers in amazement that a new member has been added to the family: the 6-year-old Rin Kaga, baseborn daughter of his deceased grandfather, from a woman who tended to him the last few years. Her mother has abandoned her and the rest of the family is determined to give her up for an adoption. In a moment of thoughtless enthusiasm, Daikichi decides to adopt the little girl, a decision that immediately makes him face on the hardships of single parenting.

With some help from his unwilling sister, he manages to overcome the initial problems, especially his utter lack of any experience on bringing up a child. Nevertheless, at that point he realizes he cannot continue with his overly demanding job, and decides to demote himself to the storehouse of the company, where he discovers many people who wish to spend more time with their children. Some issues continue to exist, but with the help of Yukari, a single mother whose son attends the same kindergarten, he learns how to be a better father. Eventually, he decides to meet the girl’s mother.

Sabu splendidly sketches his characters, chiefly Daikichi and Rin, that move on the borders of realism with their choices and general attitude, as is usual with manga adaptations, but within an utterly realistic frame. This frame is the everyday life in the highly capitalistic Japanese society, which is so harsh that actually forbids, in principle, simultaneous professional success and domestic happiness, especially in the large metropolis. The circumstances are even more difficult with single parenting.

I enjoyed particularly the way Sabu presents the warehouse employees, who, despite having lower wage and almost no chances for promotion, they enjoy the fewer working hours and responsibilities, which allows them more time in their search for domestic happiness.

The sole negative of the script is the total lack of conflict between the two protagonists, since the adopted father and daughter seems to get along perfectly, from the beginning, in a fact that does not seem so realistic.

Nevertheless, the primary target of “Bunny Drop” is mainly to entertain instead of perturbing its audience, and definitely succeeds in that aspect.

Kenichi Matsuyama is great as Daikichi, managing to retain a sense of proportion, apart from a few scenes where he becomes slightly hyperbolic. Matsuyama’s biggest trait in the film is that he manages to portray a number of different psychological statuses, in dramatic, comic, social or romantic scenes. His general appearance definitely helps him in this portrayal, particularly regarding the romantic aspect.

7 =-year-old Mana Ashida is the one who steals the show as Rin Kaga, with her performance setting the film apart from the plethora of similar productions. Her transformation from a neglected, eccentric child to a vivacious, extremely smart one is the highlight of a great performance that also highlights Sabu’s ability in directing children.

Hiro’o Yanagida cinematography is great, presenting impressive images in both the rural and the urban setting of the film, while his framing is truly impressive. Naoya Bando’s editing keeps the film flowing, occasionally giving it a sense of as if one is reading the pages of a manga.

“Bunny Drop” is very easy to watch and a very entertaining movie, and that is where its virtues lie. 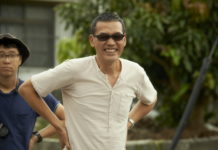