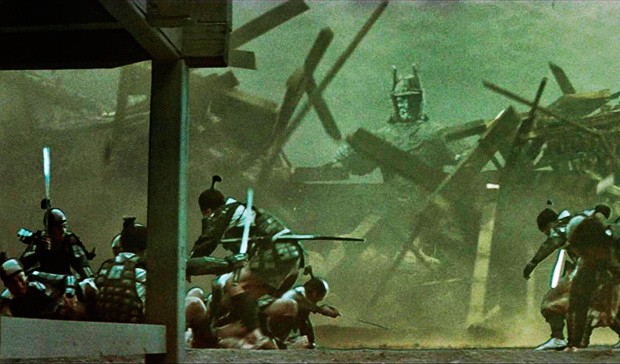 “Daimajin” by Kimiyoshi Yasuda stretches the genre borders and creates a well-aged drama about a big boy.

Being the first installment of a trilogy of which all movies have been shot at the same time, but were released a year apart (“Return of Daimajin” 1966, “Daimajin Strikes Again” 1966), “Daimajin” resembles the trend of telling a Kaiju story in an Edo setting. The Japanese production company Diaei combines classic elements of the chanbara genre with the equally popular monster category.

Getting into the first 60 minutes of the plot, the movie goes into a totally different direction and does not feel like a monster movie at all. We are introduced to a political drama about a royal family that is torn apart by a coup. The heirs and their guardian have to flee to the mountains, where they hide for 10 years before they return to their home to free the people from a barbaric tyrant. That’s it for the sword fighting aspect. Besides, there is the myth of the Daimajin, which is always present in the tellings of an old lady, who functions as a shrine maiden and is eager to appease the evil spirits that inhabit the mountains. Unfortunately, the doings of the tyrant are not helpful to fulfill this undertaking and simultaneously to the return of the heirs, the Daimajin, a big samurai rock statue, awakes.

A lot of actors are known from the “Zatoichi” – series, which is another famous Daiei production. With that in mind, it is little surprising to see faces like Miwa Takada (“Zatoichi the Fugitive” 1963), Ryutaro Gomi (“Zatoichi’s Pilgrimage” 1966), Ryuzo Shimada (“The Tale of Zatoichi” 1962), Tatsuo Endo (“New Tale of Zatoichi” 1963) and many more. The acting is dramatic, but not overacted. I especially liked Jun Fujimaki (“100 Monsters” 1968) as Kogenta, the guardian of the hires, and the shrine maiden played by Otome Tsukiyima (“Kwaidan” 1964), who gets a little bit neglected by the narration. Her character could have provided more information on the mythology and the ancient spirits in general.

Director Kimiyoshi Yasuda, who did six entries to the “Zatoichi” – series, as well as other members of the cast like editor Hiroshi Yamada (“Zatoichi The Fugitive” 1964), writer Tetsuro Yoshida (“Fight Zatoichi Fight” 1964), cinematographer Fujio Morita (“Zatoichi’s Revenge” 1965), and composer Akira Ikufube (“Zatoichi on the Road” 1963), represent an all-star crew that perfectly bring in their experience. The production design by Hisashi Okuda is the most impressive aspect of the film. Settings, clothing, and the monster itself look very realistic and authentic. This is really not your low-budget Kaiju flick with obviously fake costumes or miniature backdrops. Some of the special effects can even compete with current productions, which is actually insane because the film is more than 50 years old.

The high quality of the production design is matched by a fast-paced script, that does not waste much time with endless dialogues. There is a good balance between conversational based drama and nicely choreographed fights. Although the real origin of the Daimajin is not discussed, the pure presence of the monster speaks for itself.

Unlike many other entries of the Godzilla franchise, “Daimajin” convinces with an exceptional look and an unusual mix of two worlds. The strange debut of the trilogy preserved its charm and comes up with a whole bunch of the most famous Japanese actors at that time. Therefore, the film is also an example of the powerful studio system that influenced a lot of careers and gave space to iconic film series like this.