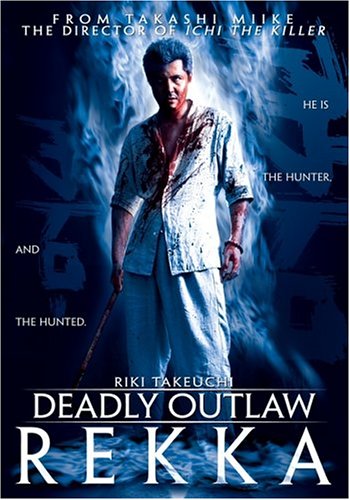 To what extent is “Deadly Outlaw: Rekka” (aka Violent Fire) simply just another Takashi Miike yakuza flick, drenched in the overly common tropes of betrayal, inter-family politics, and vengeance? On one hand, this semi-maniacal reimagining of Shigenori Takechi’s script (previously adapted in 2001 as the gloriously epic “Agitator“) is an exercise in weirdness and in collaboration; a world occupied with familiar faces in the Miike canon, hanging out and enjoying making almost no sense whatsoever. On the other hand, it is a long overdue and extended music video to one of the most celebrated Japanese psych rock albums to ever grace a record player – Flower Travellin’ Band’s 1971 masterpiece Satori. What you have then is more than just some film: “Rekka” signifies the countercultural wheel yanking its tail and swallowing it whole, bound to an endless cycle of repetition and recurrences; for the most part it is an almighty blast to experience.

After the furiously wild assassination of his boss – with an unforgettable cameo from FTB frontman Yuya Uchida – Kunisada (Riki Takeuchi) vows to exact revenge on those responsible, aiming his vengeance on the rival Otaki group. Along the way he and his right-hand man Eichi (Kenichi Endo) become (a little more than) acquainted with two Korean women, disband their squadron, and become ensnared in a horrendous plot of usurpation triggered by the underbosses of both the Sanada and Otaki group. Meanwhile, the film’s antagonising yet seemingly mismatched assassin duo constantly meander themselves one step ahead of Kunisada in a series of events leading to one hell of a bloody showdown.

On paper, the plot to Rekka appears as straightforward as you can get, yet even to the uninitiated something seems a little too left-field to simply dismiss, for underlying the promise of violence is a side of Miike seldom seen at this point in his career. While the film boasts a rough, crude, and gritty aesthetic, it is a surprisingly light-hearted affair, where large amounts of time are invested in carefree moments between cast members, most notably during Kunisada’s hair colouring, a sequence which barely has anything to do with the narrative but allows the cast to enjoy each other’s company, as if Miike is just pointing the camera in home movie fashion. Such sequences, whilst adding very little, give the flurries of insanity dotted throughout with as much frequency a far more satisfying impact; they humanise the characters whilst still following the one rule we’ve come to expect from this madcap genius: there are no rules, thus expect nothing and everything at the same time.

Spearheading this largely recognisable cast of the director’s extended family, V-Cinema legend Takeuchi gives one of finest performances of his early career as Kunisada, a gangster just as outrageous as the man giving him life. Everything from his freak-out entrance to his brutal crowbar assault on some Otaki lackies – countered by his whole reaction to Myounghyang’s (Mika Katsumara), the Korean girl he is dating, surprising response to his actions – this unhinged portrayal is perhaps more memorable than the nuanced Kenzaki character from “Agitator” and is only bested by Uchida’s crazed cameo and the duo of Ryosuke Miki and Yoshiyuki Yamaguchi as the villainous assassins. In a film where the plot takes a back-step (both in terms of quality and quantity) it is these performances which drive the film towards its incredibly whacky final act which truly needs to be seen to be believed. Even FTB’s Yuya Uchida and Joe Yamanaka make great use of their screen time as head of the Sanada clan and the dreadlocked nightclub owner!

Of course, no piece written about “Deadly Outlaw: Rekka” would be complete without the furiously rock’n’roll element of the film. Satori, that paragon of Japanese prog rock, gives the film its pulse; a heartbeat hurtling towards the maniacal finale, the music seemingly dictates what is taking place on screen like some puppet master. Coupled with the film’s near-70s aesthetic, which at times brings to mind the work of Fukasaku and Suzuki, it catapults the film away into a whole universe of its own; this aesthetic is granted thanks to Kiyoshi Itō (from Agitator) returning behind the camera. Keeping up with the hyperkinetic lifeblood provided by FTB is Yasushi Shimamura who is, much like Eichi is to Kunisada, a part of Miike; joined to the hip during his creative and productive peak, Shimamura cements himself with this film as the godfather of frenetic yet stylised editing.

Though Rekka doesn’t quite reach the upper echelons of Miike’s work (the film manages to get lost within its love-story side plot for quite some time – which almost derails it dead in its tracks – and its Sonny Chiba cameo is wasted) it is still quite the memorable outing. Seated neatly between Dead Or Alive 2 and Gozu (which would come out two years later), Rekka is a surreal blend of crazy every cinema enthusiast needs to see at least once…or twice. More merry and jubilant than complex and sadistic, you get the sense this was a blast to make for all involved as it carries not just in the performances but in the nooks and crannies tucked away within the narrative – this must be what it is like to film as a family. And it goes without saying you’ll be humming Satori for days to come after the final credits.