While it seems most critics and cinephiles think of Takashi Miike when it comes to a director who displays a certain work ethic, there is, however, very few talk about Hong Kong director Johnnie To. Over the course of his long career, To has maintained a steady and constant pace consisting of three to four and sometimes even five features per year and while the quality of some of these features may vary, there is no denying the director has also many strong years under his belt. For example, in 2005 and 2006 he produced and directed “Election” and its sequel as well as “Exiled”, three movies which are perhaps among the best of To’s filmography. Along with works such as “Fulltime Killer”, the “Running Out of Time”-films and “Vengeance” To has proven to be a director who follows the footsteps of filmmakers like John Woo, but who expands their themes for his cinema is about the death of the gangster. 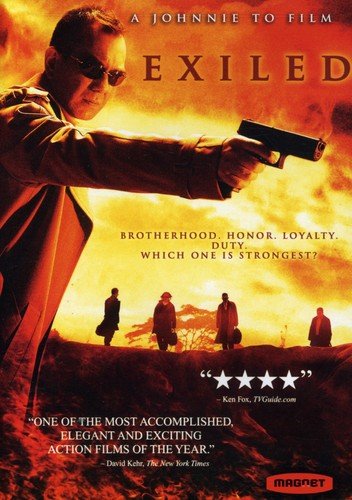 The story is set in Macau in the year 1998 when two killers, Blaze (Anthony Wong) and Fat (Lam Suet), are hired by mob boss Fay (Simon Yam) to kill his former employee Wo (Nick Cheung). Even though Blaze and Fat know Wo ever since the days as youth when they decided to join his organization, they do not hesitate to accept the contract. At the same time, Tai (Francis Ng) and Cat (Roy Cheung) have heard about the contract on their friend’s life and have chosen to do everything in their power to stop the two killers. However, as the group has met and after some shooting, they eventually stop fighting, realizing their common past and how these experiences bind them together.

Considering they now have a mob boss on their tail expecting them to present results, the group decides to do one final score whose profit will also take care of Wo’s wife and newborn child. But when the group faces their new target, they are confronted by Fay along his men, who finally realizes the killers have betrayed him. From now on, the men are on the run, trying to get out of Macau while also protecting the family of Wo.

In general, the Hong Kong action movie as defined by the works of John Woo regards the killer as well as his opposite as lonely hunters fulfilled almost exclusively by their mission and their own code of honor. Within the gangster movies of Johnnie To, we can see how the director has adapted this design of the (anti-)hero from his countryman, but presents his characters most of the time as part of a group. In the case of “Exiled” the killers are, at first glance a homogeneous group solely defined by their mission, the gangster pose so to speak, an impression To continuously contradicts with scenes of slapstick humor and almost unexpected camaraderie. While they may be shoot at each other in one scene, they may have a meal together just minutes after or help furnishing and arranging the apartment of the very person they have come to kill.

Within his work To, as many authors have remarked, follows a more European tradition of filmmaking. Strongly influenced by spaghetti western and the gangster movies by Jean-Pierre Melville, To uses these references to create certain archetypes, such as the experienced leader (Wong), the (somewhat) rebellious second in command (Ng), the joker (Suet) and the silent partner (Cheung), a design which you can see again in films like “The Mission” or “Sparrow”. What binds these men is a common past, a tie of loyalty which is at odds with the kind of profession they have chosen for them themselves, or, with regards to the film’s title, their status as the “exiled”.

Despite their camaraderie, these men are outcasts, or, to go one step further, the (living) dead. In one of the most important scenes of the movie, the four men find themselves on the outskirts of Macau, having decided their escape based on a game of heads and tails which has led them to a desert-like area. Maybe realizing they have reached a dead end, the image becomes symbolic for the almost absurd condition they are in, as they know their luck has finally run out. From the very beginning in even the most humorous of scenes always carries this knowledge of doom, a sense of gallows humor for even their friendship cannot protect them from the ultimate fate that awaits them, a death certificate they have signed once they decided to begin the “career” as a gangster.

“Exiled” is an important production within Johnnie To’s body of work. While the film has the usual ingredients of beautifully executed shootouts, there is a distinct melancholy and a sense of fatalism within this movie, an almost logical conclusion regarding the disillusioned tone of the “Election”-films.