On May 24, 2017, the Constitutional Court of Taiwan ruled in favor of same-sex marriage, with the Ministry of Justice vowing to take action in favor of a petition demanding a stalled bill on gay rights be enacted. If the proposed bill was passed, it would be the first legislation in favor of gay rights in Thailand. It would also make the kingdom the first nation in Southeast Asia where gay couples are recognised in the eye of law. (source: bangkok post). “Fathers” deals with this particular issue. 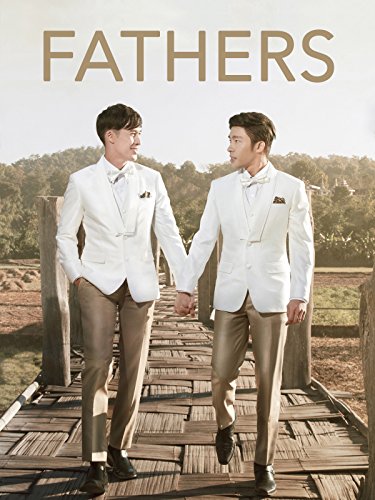 Phoon and Yuke are two men of the higher bourgeoisie, who have been a couple for 13 years. They have adopted a son, Butr, who has been abandoned in an orphanage, but due to the lack of legislation for same-gender wedding, Phoon appears as his only father, on paper. The family is very happy, but the fathers have not explained their situation to their son, a decision that creates many problems when Butr is old enough to attend elementary school. Starting with the behaviour of the other parents, that are not exactly eager to have a child from a gay couple in their school, to the other kids constantly making fun of Butr’s situation, and the involvement of the school principal, Phoon and Yuke find themselves having to deal with a number of very hard decisions. And if that was not enough, Rattiya, a social worker of the Children’s Rights Protection Organization gets involved, questioning the idea of Butr growing up in a family without a feminine presence, and even tracks down his actual mother, who wishes to be a part of his life now. When Phoon decides to send Butr to stay with his mother and her boyfriend for a while, his relationship with Yuke becomes rather strained.

Palatpol Mingpornpichit presents a thorough analysis of the concept of gay marriage and the raising of a child in this environment. In that fashion, he examines the impact it has in the school environment, both regarding the children and their parents, the way authorities deal with the matter, and the consequences of adoption on all members involved. Furthermore, he explores what it means to be gay in contemporary Thailand, and the way gays perceive themselves. The analysis of the way the characters in the film react to all the above is equally thorough, thus resulting in a movie that tackles its subject from every angle, in a rather impressive way.

Mingpornpichit builds his story in a fashion that retains the interest for the whole of its duration, as he presents a situation that deteriorates each time a new character or a new situation is introduced. In that fashion, the film begins like a happy-go-lucky movie where everyone seems content, but as soon as reality kicks in, it is transformed in a very poignant social drama, with the editing helping much in implementing this tactic. The difference in the scenes in the bathroom (initially the three of them bathe together, but then Butr wants to be alone) is a distinct sample.

The one thing I did not like is the fact that the couple seems to be very rich, a concept that seems to detract from the impact the messages of the story could have. Furthermore, a number of scenes in the beginning, although quite beautiful, as they highlight the excellent cinematography, seem like advertisements of some exotic resort, and do not fit the general atmosphere of the story, that tends to be rather realistic. Perhaps the director did not want to start the drama from the beginning and to add even more of it through financial issues, which is more than logical, but I think he lost his sense of measure at some point, although for a very brief time.

Asda Panichkul as Phoon and Nat Sakdatorn as Yuke are quite convincing as a gay couple, with their transformation from completely happy but ignorant, to disillusioned but unable to cope with their situation parents, being the highlight of the performance. Aritach Pipattangkul is also quite good as Butr, with Mingpornpichit “using” him very wisely. The one who steals the show though, is Sinjai Plengpanit as Rattiya, in a very difficult role that has her presenting all the hard truths of the family’s situation in a strict and no-nonsense, but quite honest fashion.

Overall, “Fathers” has its faults, but the thorough and very sincere overview of the film’s main theme makes it a more than worthy spectacle, particularly when one considers the lack of films about gay parenting, especially in Southeast Asia.