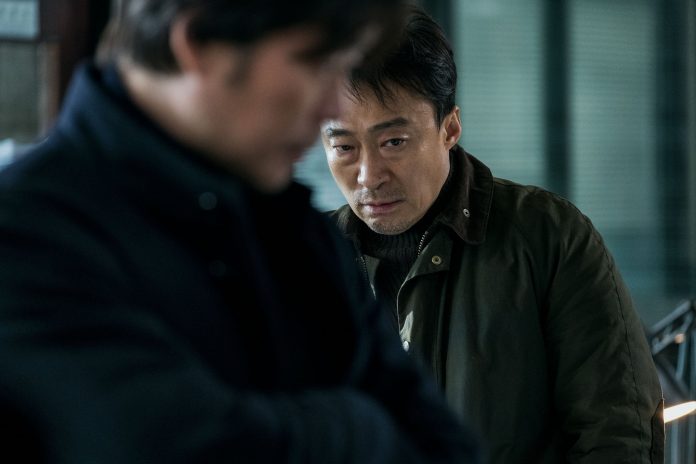 After his films “Broken” and “Bestseller”, Korean filmmaker Jung-ho Lee has directed a remake, or rather re-imagination of the French thriller “36th Precinct” by Olivier Marchal. While there are certain similarities between the two titles, Lee has made quite a different film within the specific cultural background of his home country. Besides telling a story about corruption his movie takes a look at the steps a person is willing to take if the reward is a promotion, a raise in one’s salary or, simply put, the idea of superiority in a world where power and influence is the ultimate currency.

Following a series of brutal murders of young women, the Incheon police department is under public pressure to quickly apprehend whoever is responsible. Within its police force, Unit One and Unit Two might work together on paper, but given the possibility of a promotion to the position of chief, detectives Jeong Han-Soo (Sung-min Lee) and Han Min-Tae (Jae-myung Yoo) encourage their teams not only to investigate but to actively work against the other unit. However, while Han still relies largely on his skills as a police officer, Jeong, who also takes a few jobs on the side in order to receive necessary information on a subject, frequently oversteps the line into illegality.

As their competition reaches its peak, even Han is forced to change his methods while Jeong’s closeness to the underworld finally takes its toll on the officer, a development which could cost him his career and even his life.

While there are certainly several beasts unleashed within the running time of Jung-ho Lee’s movie, the one which leaves the most lasting impression is the image of the city of Incheon. The modern metropolis with its skyscrapers, its traffic and people serves as the suitable symbol for an entity able to change its behavioral patterns from seemingly harmless to dark, brutal and bloodthirsty. Similar to such great genre entries like Na Hong-jin’s “The Chaser”, the metropolis is the hunting ground for the killers and cops alike, but then again, as we have seen in many thrillers from this country, there is no clear distinction between the two personas. Joo Sung-rim’s cinematography emphasizes the moral ambiguity of this place and its main characters, at times only distinguishable by their level of corruption.

However, there is a foundation to this corruption which lies within the system Jung-ho Lee portrays. In many ways, the murder investigation eventually becomes almost a minor motive for the investigators, encouraged only by the promise of rising above their men, a medal and a ceremony representing their rise within society and the department. Much like in the novels by Hideo Yokoyama, which portray the hierarchy and hidden codes within the Tokyo police force, “The Beast” shows the police as a symbol for a system in which prestige and power have taken the upper hand, defining (and corrupting) its representatives from the inside.

Certainly, there are many thematic high points within the film, highlighted by the performances as well as the cinematography, but also “The Beast” suffers from a very common tendency in Korean cinema for redundancy and repetition. Even though various set pieces, for example, a fight scene taking place in an apartment block, show the quality of this production, Lee Jung-ho’s script, co-written by Jung Eui-mok, does not tap into anything thematically or visually new after a while, resulting in a rather sluggish pace which hurts the overall impact of the film.

In the end, “The Beast” remains a solid entry into the genre of the cop thriller, suffering from flaws which sadly seem to have become common practice in Korean genre cinema. Nevertheless, its performances and cinematography reach moments of great dramatic tension and thematic depth which will likely attract some viewers to this film.

Film Review: “The Witch: Part I. The Subversion” by Park Hoon-jung