The idea of fire-fighting on film has never had much competition beyond the spectacle-filled “Backdraft” from Ron Howard, who mixed together family melodrama with harrowing realism and top-notch effects work in its numerous action scenes. The result was a film that still stands up to this day as a fantastic action film and one of the most underrated Hollywood action films of the 90s. Director Tony Chan tries to accomplish this same feat in his latest disaster epic “The Bravest”, based on the real-life incidents in Tianjian, China in 2015 and hitting digital platforms January 14 from Sony Pictures. 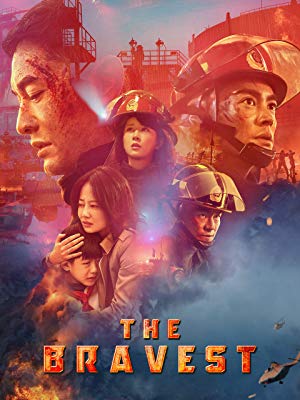 After a disastrous incident, firefighter Li Wei (Xiaoming Huang) is booted from the group after the deaths of several team-members in a blazing inferno under his watch. Finding solace in a secondary unit, he turns over command to a hotshot rookie who wishes he were still in the regular Army Corps than stuck fighting fires. When a fire breaks out at a coastal oil factory, potentially endangering the city, Zhi finds himself and his unit thrust into the firing line to battle the blaze only for unforeseen circumstances and a series of lies from local officials about the severity of the fire to cause it to spread further than they imagined. Left with no alternative to defending the city, they’re forced to rely on any means possible to stop it from engulfing it whole.

At it’s best, “The Bravest” works as a straightforward action-filled disaster epic. There are numerous high-energy scenes depicting the groups at work battling the various fires and infernos around the city, all of which captured with explosive cinematography that puts the viewer in the heat of the moment. The opening, showcasing the team tackling a blaze in a small neighborhood shop, gets this going nicely with a series of great stunts and frenzied action leading into the fateful accident. That the main blaze starts around the half-hour mark and keeps a steady, unrelenting tempo throughout the rest of the film is a lot of fun, generating wide-scale disaster scenes of entire housing complexes and buildings being damaged by explosions or spreading fires. Focusing on ground-tactics with the fighters as well as aerial attacks and sea-based antics, this becomes quite exciting with these intense sequences.

Besides the thrilling action, what tends to hold “The Bravest” up are its strong technical qualities. The fluid camerawork throughout the scenes of the blaze, taking the viewer up-close-and-personal with the crew as they struggle to implement their plans to keep the refinery in check and the fire from spreading is quite impressive. The heat can be felt from several instances as the flames are shown surrounding the firefighters inside the burning structures. This spectacle is handled nicely with the mounting action, with the storyline twists involving keeping the city safe and the continuous lies from the facility security manager that escalates the drama about the out-of-control situation. Overall, these aspects provide “The Bravest” with a lot of enjoyable elements.

There are some major drawbacks to the movie. The biggest issue here is the unnecessary and considerable heroic jingoism on display from writers Chao Wang and Yonggan Yu who hammers home its theme of bravery and self-sacrifice to comic levels. The cliched notions, from the firefighter doing his job for the sake of his family, to the experienced leader risking himself to put out the blaze and the cowardly rookie who finds the courage to do his job, are thick and heavy on civic pride. Thus, there’s no suspense to be derived from the potential outcome of each of these individuals as the solemn saluting and moments of silence that follow scream out their true intentions. On top of that, there are the storyline tropes about attempting to stop the fire without letting the severity reach the public, in fear of panic or following useless subplots like the wife looking for her son, rendering the film to be overly-familiar and predictable. While this last issue isn’t a true detriment it does undo some of the damage at its core.

While it gets plenty of positive marks for the action and technical skill-set, the overwhelming jingoistic nature of the storyline and some useless subplots do bring “The Bravest” down somewhat. Those wanting to go for the first qualities will be highly entertained by this one, while viewers turned off by the negative aspects will be less satisfied overall.

Who Will Get Remake Rights To Hit Zombie Thriller ‘Train to Busan’ ?