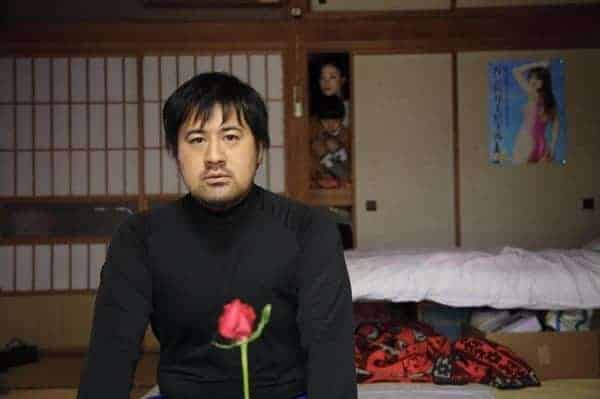 As I have mentioned before, PIA Film Festival has helped a number of directors to present their first feature film over the years, through the scholarships given to the directors who win in the competition it organizes every year. Takatsugu Naito, with Midnight Pigskin Wolf, was one of those winners, which allowed him to shoot “The Dark Harbour”.

Manzo Ishiguro is a fisherman who works by himself on a boat his father left him. He lives in a small fishing village and works very hard, and his only entertainment is going to the local bar with a red rose in his lapel, in an effort to find single women. Alas, he never succeeds and being 38 years, he is quite tired of being a bachelor. At one point, the local council organizes a party, inviting women from the city to get to know local bachelor men, and asks from the participants to shoot a video presenting themselves, which will be shown during the part. However, when Manzo’s screens, and while the party seems to hold no success for him, every person there witness the fact that a woman and a child seem to be hidden in the closet in his house

When Manzo returns home, he discovers that the two “tresspassers” have been living in his closet for some time, actually. Initially annoyed, he kicks them out but soon finds himself after them, asking them to stay, explaining that his loneliness has wore him off. Mitsuko, the woman, agrees and in essence strikes a deal with him exchanging sex for roof and housing for her and her son. Manzo, however, eventually starts having feelings for her.

Takatsugu Naito directs a film that seem to incorporate all the elements of the Japanese indie and the “middle film”: bittersweet story filled with quirkiness, slow pace without any particular exaltation and laconic acting. His effort, in combination with Kiyoaki Hashimoto’s cinematography result in a highly realistic movie that highlights both life in the remote, small Japanese towns and the impact loneliness can have on a person. The slow pace, as implemented by Shinichi Fusima’s editing mirrors both these aspects in the best way

Shinya Kote is excellent as Manzo, frequently looking like a sad bear and acting mostly through his facial expressions, in order to communicate the series of simple feelings and aspirations that dominate his character. His performance is the main source of both comedy and drama and he succeeds in both. The highlight of his performance, however, is the way he presents the turnaround regarding his feelings for his newfound “family”. Yuko Miyamoto portrays her character in similarly laconic fashion, in essence completing Kote’s role with her own. Her performance is unremarkable but fitting.

“Dark Harbour” is a distinctively Japanese film, with all the pros and the cons of the category. Fans of local cinema, however, will definitely enjoy this one.

Film Review: The Hardness of Avocado (2019) by Masaya Jo

Short Film Review: When the Rain Stops (2019) by Yui Yamaguchi