It is not so frequent for an author to become the director of his own novels, but Ryu Murakami, whose most famous work is probably Miike-directed “Audition” is not your regular artist in any way. “Tokyo Decadence” is not even the first of his novels he directs, since his filled with violence, drugs and overall extremity style was already self-adapted into cinema three times before this movie. Let us see why he is so unique though. 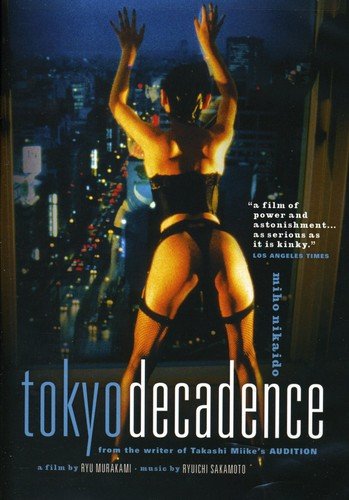 In a style relatively similar to De Sade’s perversion cataloguing “The 120 Days of Sodom”, the film revolves around the life of a 22-year-old timid female college student named Ai who works as a specialty prostitute for an exclusive escort agency that caters to wealthy, mostly perverted and corrupt, Japanese men in Tokyo. The biggest part of the movie highlights her line of work, as Murakami takes his time depicting her into sessions involving sodomy, threesomes, asphyxiation, licking high-heels, a man almost dying and coming back to life as in a miracle, threesomes, male and females dominant, drug addicted customers and in general a plethora of perversions men with money indulge themselves in. The last part however, takes an almost surrealistic turn, despite its “normality” when compared to the rest of the movie, as we watch Ai struggling over her unrequited love for a married gallery artist and eventually deciding to visit his home under the influence of an unknown drug.

Murakami pulls no punches in presenting the connection between violence and eroticism, in a series of scenes that are quite erotic but also very realistic, to the point that the sensualism deriving from living some things to the imagination is nowhere to be found. In a style that entails the kind of mundanity that is also found in Haruki Murakami’s novels, Ryu’s protagonist seems to have no purpose in life and no one can actually say if she is enjoying what she does or if she is just in for the money. Perhaps one could say that she is trying not to think about her love for the gallery artist, but this would probably go too far.

The message, and the overall style, however, changes completely in the last part, which follows the rules of the Japanese indie mostly, through a surrealistic quirkiness that involves policemen, a kind of an opera singer that eventually saves Ai, and an overall deliriousness that completely changes the narrative.

Tadashi Aoki’s cinematography managed to capture all the aforementioned elements quite artfully and that is an accomplishment on its own, with his camera following each “perversion” as closely as possible. Kazuki Katashima’s editing may be occasionally abrupt when the scene changes, but the general pace of the movie is rather slow. Ryuichi Sakamoto’s music accompanies the various scenes excellently, with a number of scenes remaining in mind as much for the image as for the score.

Miho Nikaido as Ai had a very difficult role to perform but she manages to portray the “willful victim” quite convincingly, with her appearance obviously helping in that regard. Her rendition of the drugged/lost girl in the end, is probably her best part. The rest of the cast do not shine particularly, but Chie Sema as the Opera Woman and Yayoi Kusama as the Fortuneteller definitely steal the show.

“Tokyo Decadence” is quite close to the pinku film, but at the same time, so much more, and that is where its true value lies.