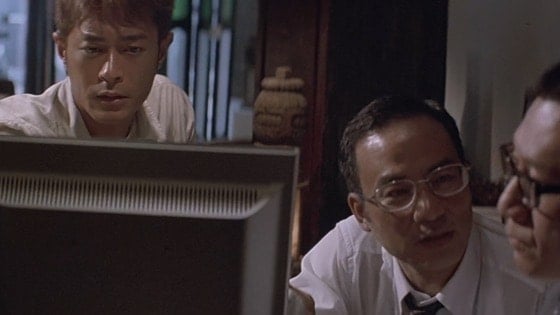 When three of the best directors of modern Hong Kong action cinema come together, distributors as well as fans naturally become quite excited for the result of their efforts. Scheduled for filming in 2007, “Triangle” was planned as a frame story directed by Tsui Hark, Ringo Lam and Johnnie To, with each one taking charge of 30 minutes of the overall movie. To make matters even more interesting, they agreed on an overall narrative framework, but with each segment the director would work with a different crew and would continue the story with a different script. While Hark directed the first segment, Lam did the second and To’s segment concluded the film.

Of course, the overall concept and the premise of theses three directors working together looks very good in theory, there are however, some flaws within the final outcome which need to be addressed, many of which can be backtracked to the initial idea of the film itself.

The story sees three men, all in rather pressing financial troubles, who have teamed up in order to come up with a plan to make some money. While Fei’s (Louis Koo) idea to take part in a robbery backfires, resulting in him being relentlessly pursued by the criminals wanting him to find a driver for their getaway car, the trio manages to get their hands on a map which leads them to a treasure. Their find turns out to be a golden burial dress and a few valuable antiques, a rare and profitable find for Fei, store owner Mok (Sun Hong Lei) and Sam (Simon Yam).

However, as the three of them attempt to find a buyer for the treasure, others have followed their tracks, now wanting to have their share of the profits. Apart from Fei’s pursuers, there is also Wen (Lam Ka-Tung), a corrupt cop who has an affair with Sam’s wife Ling (Kelly Lin), who regards the gold as a way to finally get out of Hong Kong and get rid of his lover’s husband once and for all.

Even though there are no chapter titles indicating the change from one segment to the other, the tagline of “Triangle” stating “Temptation. Jealousy. Betrayal” may indicate the title of each part of the film. Whereas there is certainly a connection between all of them in terms of characters and also style to some degree, any viewer will likely notice the overall uneven structure of the film, especially in terms of mood and, sadly, also quality. For instance, the first segment is reminiscent of a more or less by-the-book heist/action thriller, the other two parts focus on other issues, such as the group’s dynamics and the relationship triangle between Sam, Ling and Wen. With each director following his own unique style, they do not necessarily pick up on the thematic and narrative threads laid out in the previous segment which results in some of them being unfinished or seemingly pointless.

Looking at each segment individually, To’s and Lam’s contributions may be the most satisfying in terms of content and themes. Besides constructing another, “mirror” triangle within the film, Lam manages to tell a multi-layered story about love, deception and romance, reminiscent of film noir whereas To’s segment shows many of the strengths attentive viewers know from his other works regarding the constitution of a mostly male group of criminals. Especially the shoot-outs have a tendency towards the elegant “bullet ballets” one has come to appreciate from the director, this time also artfully playing with light and dark in the final moment of the film.

In the end, “Triangle” is an interesting, but flawed experiment showing the individual strengths of each contributor. While the overall story at times suffers from the lack of structure and coherence, each segment on its own offers a great insight into various themes of jealousy, greed and corruption. This may not be the highlight cinephiles and fans of Hong Kong-cinema were hoping for, but it is nevertheless a solid group effort from three of the most popular talents of Asian cinema.