With the upcoming miniseries “Uzumaki:Creation” set for release this year on “Adult Swim”, it feels like an ideal time to revisit the manga. “Uzumaki” has had an enduring reputation of one of the core titles within the horror manga, almost becoming synonymous with mention of the genre. It can be said that Ito’s work, and this title in particular, proved to be gateway for many towards fandom into the sub-genre. 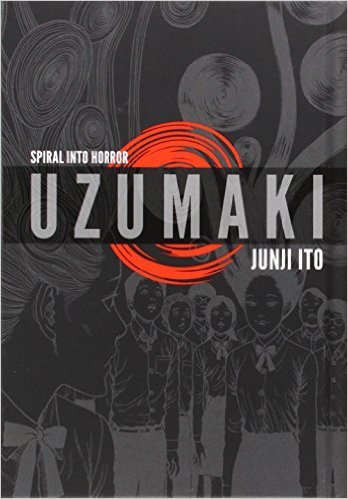 For those unfamiliar with the title, the story follows a young girl named Kirie and her friend Shuichi as they battle an infectious obsession with spirals plaguing their seaside town. The infection warps the mind and bodies of its inhabitants in all sorts of bizarre scenarios, eventually leading to the entire town being engulfed in a spiral pattern. Through Kirie and Shuichi paying constant witnesses to the decline of family, friends and community, the weight of knowing the truth of the doomed town makes them some of the few to combat the growing obsession.

In trying to understand the narrative structure of the manga, it becomes important to understand the story structure often utilized by the mangaka throughout his career. Notably, the lead characters within these stories are purposely made irrelevant in comparison to the object of horror. This approach is common within the realm of “Cosmic Horror”, but seldom utilized in many horror driven narratives. This approach eschews the characters’ desires, personalities and motives beyond the simple human instinct to survive. With this in mind, “Uzumaki” exists as one of the best examples of this approach to horror, and although this may be seen as a lack of depth in character development, fans of the genre understand the difficulty in writing in this medium. The lack of discernible personas is a hurdle that needs to be overcome, especially for those more drawn to stories that evoke empathy/sympathy. However, in embracing the flow of storytelling, Ito stands as one of the most talented creators within horror fiction (both manga and cosmic).

The manga is composed of a series of short stories that become interwoven, with Kirie and Shuichi binding them together in a single narrative. This results in many chapters feeling like they could see success as a one shot, with certain segments able to work within their own context. The one downside of this approach is in pushing the reader to pick favorites, thus highlighting any fallacies within other chapters. However, this has also cast a wider net of appeal, with each segment being constructed with some slight differences in delivery. Ensuring the conversation on favorite segment will vary between fans, leading to deeper exploration of the work. The manga makes good use of transitioning between dark comedy, more ‘traditional’ horror stories, and profound absurdity. The different approaches, certainly add to the sense of madness invading the town and it becomes fascinating to see how it affects different residents. From tardy people turning into giant slugs, to pregnant women hunting for blood in the night, there is no shortage of variety in the concepts that push the simple idea of ‘obsession with spirals’ into something much more sinister.

Junji Ito has developed a recognizable visual style that compliments the horror genre. His rather obsessive approach to his drawings, often spending hours on panels, mimics the kind of obsession and madness in his stories. This results in gloriously displayed panels that contain numerous layered lines, adding a grotesque aesthetic to an already disturbing narrative. It becomes easy to get wrapped up in certain panels, which always works in benefit of owning the printed version.

The compendium edition released by Viz media, bound in hardcover, does contain one lost chapter, which given it’s odd flow makes sense it was excluded in the original run. The book also contains the comedic commentary by Ito, through a cartoon he drew of himself explaining his spiral into madness. These are welcome additions, making an already well packaged collection all the more appealing.

It has been a long time since I have read “Uzuamki”, and like many horror manga fans, it was my starting point within the genre. When something becomes such a cherished memory, there is always a slight chance that its initial effect becomes numb after delving deeper into a certain genre/art form. Thankfully, the manga is still as strong as it was when I first read it. It still makes me squirm, laugh, and get caught up in the obsessive art style of Ito. It truly is a masterpiece of the genre, an easy statement to make among fans, but to those who have yet to experience Ito’s work, this is an ideal place to start. When you ask a horror manga fan for a recommendation, Ito and this work will often come up, for good reason. Essential reading for fans of Horror and Manga alike.