“Election 2” was named as the best film of the year by the Hong Kong Film Critics Society Awards and serves as a sequel to “Election” (2004), although there should not be any issues for those who haven’t seen it, as there is a prologue to get everyone up to speed with the Triads and their protocols. 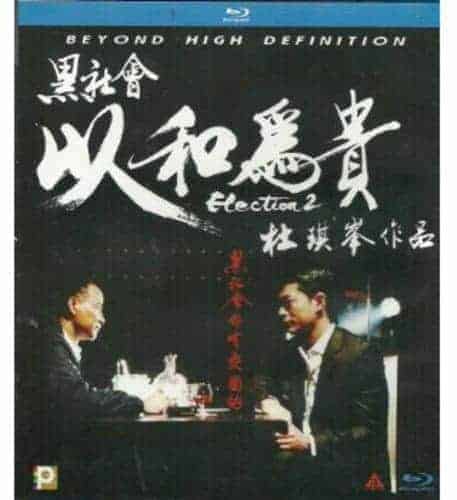 In this film, Lam Yok, the Chairman at the end of “Election” is nearing the end of his term. As per the tradition, he must step down and become legitimised. He also must nominate one amongst his Godsons as a worthy candidate for the post of Chairman.  The best option Lok has is Jimmy (Louis Koo). He is a businessman who joined the clan just for their protection and knows that there is only one way out. Jimmy needs to become chairman, but is reluctant. But when his hand is forced, he realises that he must reluctantly engage in a battle for the post of Chairman and eventual freedom.

This moderately paced film explores themes such as the eradication of protocol and value in contemporary society. It also shows the viewer how power and the quest for power can corrupt a person.

Lok’s character showcased this in the climax of the first film. This power hungry arc continues in “Election 2”. We see this through Lok’s expressions when we learn that he has no intentions in honouring the tradition. He proposes an unprecedented protocol breaking re election.  At one point, Lok is extremely scornful when he is told that a second term won’t happen. Simon Yam was nominated for Best Actor for this performance at the Hong Kong Film Awards.

Jimmy’s arc as a reluctant candidate to an ice cold murderer is chilling. Director Johnnie To wants his audiences to squirm in their seats. Cinematographer Siu-Keung Cheng maintains focus and does not pan the camera thus relying on audio to convey the on screen brutality to the audience. Nothing is left to the viewers imagination. This helps us understand Jimmy’s descent into anarchy and understand what it means to him to leave the clan and become legitimized in the mainland. These two actors are ably supported by Nick Cheung’s Jet who was nominated for Best Supporting Actor at the Hong Kong Film Awards.

In a film titled “Election” audiences would expect politics and betrayal. We get just enough of that and it’s good that Johnnie To did not try to overdo this. The characters are not double agents and the switching loyalties of characters isn’t over dramatized to the point of making the film feel unbelievable. It is a crisp 93 minute watch that is grounded and engaging.