Have you found your happy end?

It’s not a line from the film, but is it not a fitting question to ask each of the characters? 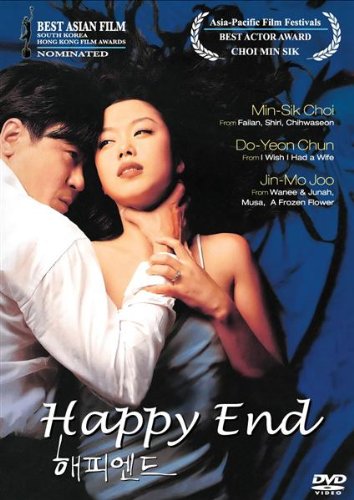 The first eight minutes of “Happy End” establishes two pivotal plot points: an adulterous affair and a forlorn man who reads detective and “heartbreaking”, as he himself puts it, romance novels. The affair is between Choi Bo-ra (Jeon Do-yeon), married with a child, and her ex-lover Kim Il-beom (Joo Jin-mo), and the pathetic man her unemployed husband Seo Min-ki (Choi Min-sik). At first, except for the unfulfilling marriage that ties Bo-ra to Min-ki, the characters hardly cross paths. Bo-ra and Il-beom are immersed in their world of passionate love-making and photography rituals. Min-ki in his stead is lost in his escape zone – an old bookstore – where he takes his daily dose of detective and romance novels. As the couple become increasingly enamored with each other, craving more than just sex, and the husband starts to grasp what’s going on, the story takes a turn towards an ending that perfectly combines the said genres.

With the performances of a very strong cast and a relatable, well-scripted story, Jung Ji-woo’s “Happy End” is a refined and memorable feature-length debut. No character is quite in the wrong, nor are they entirely justified in their actions either. All seem to seek a respite from reality, writing their own happy-ending fiction either through sex and intimacy out of wedlock or books. But the longer they indulge themselves in fantasy, the deeper they sink into crisis in reality. Despite it not aiming to be so, Jung’s debut is, in a sense, a social commentary on the effects of economic downfall on marriage, gender roles, and employment with no lack of psychological devastation, and (with a nod to Min-ki) heartbreaking romance.

Music and cinematography are both great and befit the main themes of the film. Scenes are shot mostly using handheld cameras and therefore appear more intimate and personal. The film’s score is nostalgic and wistful, and its ending theme confers on viewers a permanent melancholy endemic to its characters.

Praise for the film’s acting should, first of all, go to Jeon Do-yeon as Choi Bo-ra, whose charm lasts even in her absence in the last act of the film. In no other films has she been so riveting and beautifully melancholic, arresting viewers’ attention both in her moments of ecstasy and despair. She effortlessly slips into her character and easily outshines her co-stars, and though her character has done quite nasty things, we can’t help but have sympathy for her due to the emotional depth Jeon gives her character. And that reverie-like scene where she tries to catch hold of a floating lantern is arguably Jeon’s most beautiful moment in the film.

Much of Joo Jin-mo’s success in the role derives from his good look, though of course his acting is decent, and he portrays his character of a lovesick man quite convincingly. Joo’s chemistry with Jeon Do-yeon is the best part of his performance and adds greater depth to the doomed romance of Il-beom and Bo-ra. Choi Min-sik’s performance shall be noted for emotional restraints and a remarkable calmness. While Bo-ra is always alive and in the moment, Min-ki most of the time seems stoic and dead, and always somewhere else. Choi’s refrain from acting demonstratively well reflects the pressure men in patriarchal societies must endure and makes his portrayal of bereavement more genuine.

“Happy End” – the title is written more as a question than an affirmative phrase. In the end, happiness for all three characters is like the lantern that floats past Bo-ra. Right there before their eyes but somehow always eludes their reach.