Juzo Itami may be mostly known in the west for movies like “Tampopo” and “A Taxing Woman” but his most significant film is probably the current one, ” particularly because it was the first realistic movie about the practices of Yakuza. Alas, the repercussions of this portrayal were even direr than Itami expected. Yakuza considered the movie a scathing attack on their pride, and its realistic content apparently hit a sore spot with real gang members who, eventually, waited outside of Itami’s home and slashed him across his face with a knife. As per his own words in a New York Times interview, “They cut very slowly, they took their time. They could have killed me if they wanted to.” Furthermore, there are many who consider his alleged suicide on December 20, 1997, after a weekly magazine wrote about his extra-marital affair, a murder by the same gang who slashed his face, the Goto-gumi. 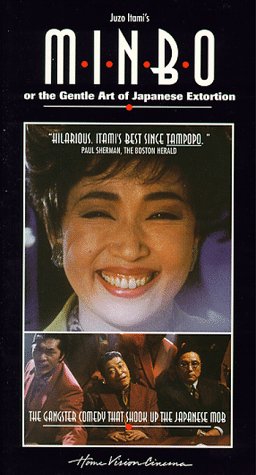 Nevertheless, the film takes place mostly inside a high-class Japanese hotel, the Europa, which has been taken over by Yakuza, both as a hangout and for doing their shady business. The administration does not seem to care in particular, but when Kobayashi, the general manager, learns that a summit of world leaders that was supposed to take place in the hotel is about to be canceled due to the government learning about the presence of Yakuza there, he decides to kick them out. Fearing to confront them himself, however, and in a rather cowardly move, he tasks Suzuki, a hotel accountant, and Wakazuki, a bell boy and former college sumo-athlete, with the task.

Their attempts, however, are met with extreme failure, and even worse, the two of them, the hotel as a whole, and Kobayashi soon find themselves in trouble, particularly after the appearance of Iriuchijima, a rather cunning sub-boss. Enter Mahiru Inoue, a lawyer who specializes in dealing with the yakuza, and who has the police connection to back her up when things get out of hand. Mahiru trains Suzuki and Wakazuki, mostly by example, showing them how no to fear the yakuza, who are repeatedly portrayed as loud and dangerous, but in essence weak and completely scared of the police. After a number of successes, however, the feud escalates, and the only solution seems to be for everyone to join forces against the yakuza.

Juzo Itami directs a film that begins as a comedy, and while the humor and a general happy-go-lucky atmosphere is retained until the end, drama and social commentary soon become a large part of the narrative. Furthermore, one of the most important assets of the film is the way he uncovered the despicable tactics of the yakuza, who seem to “feed” on people’s naivety and fear, and when that does not work, on their numbers and violence.

The fact that the person who eventually hands them their match is a woman is equally comic and ironic towards them, particularly since the yakuza world is extremely male-dominated. Mahiru may function like a superhero at times, unfazed by the scare tactics of the yakuza and always coming up with a way to counter them, but the fact that it is soon proven that even she needs the help of the employees and the police to face them, moves towards realism, as is the fate she eventually has to face in the story. This last part, along with the way Kobayashi is trapped are the most shocking in the film, while their resemblance with what eventually happened to Itami can only be described as tragically ironic.

These consequences are another step towards realism, since Itami highlights the fact that dealing with organized crime is by no means, an easy feat, and actually takes a combination of powers to do so. On the other hand, and while a number of the yakuza are proven extremely cunning, the  majority of them are portrayed as caricatures with the loud voices, constant cursing and grandiose hand gestures, but also as cowards, always putting their tail between their legs whenever the police appears, and very rarely actually acting on the constant threats they spur. At the same time, a number of them are depicted as plain idiots, unable to handle Mahiru’s smartness and lack of fear.

The fact that the elderly owner of the hotel is proved quite heroic eventually, while the rest of the employees begin as cowards and only find strength through their numbers, his example, and Mahiru’s training, could also be perceived as a pro-capital/authority comment. At the same time, that the government leaves the hotel administration to deal with the yakuza could also be perceived as comment about the official lack of will to deal with the organized crime issue.

A large part of the film unfolds in the hotel and a number of other rooms, and frequently gives the sense of a stage play, particularly due to the dialogue-heavy narrative. Yonezo Maeda’s cinematography uses mostly close-ups in these scenes, which actually intensify this sense, but also allow the actors to shine. Particularly Nobuko Miyamoto (who was Itami’s wife and the one who eventually identified the body) as Mahiru thrives in this tactic, with her cheerfulness, torrenting speech and extreme haircut making her a delight to watch. Yasuo Daichi as Suzuki and Shiro Ito as Iriuchijima also give excellent performances, although for the most part, they seem to react to Miyamoto’s acting. Akira Takarada as Kobayashi is convincing as the craven man who finds courage in his despair.

The outside shots, however, are also well presented, while Akira Suzuki’s editing induces the film with a rather fast pace, despite a number of scenes that are quite long. This sense of speed is also intensified by the fastness of the dialogue’s delivery.

“Minbo or the Gentle Art of Japanese Extortion” is an exceptional film, both due to the entertainment it offers and for the portrayal of the yakuza, and it is unfortunate that it will be remembered mostly for its consequences.

Bunji Sotoyama presents a gentle view on the lives of the elderly, in “A Sparkle of Life”