With the success of his predecessor becoming imminent, it was perhaps just a question of time before cinema audiences would be given a sequel to Johnnie To’s 1999 film “Running Out of Time”. Even though Andy Lau’s character is naturally out of the picture in this film, we have Lau Ching-wan reprising his role as Inspector Ho, who, once again, has to engage in a game of deception and trickery with a skilled thief. And although there is always a high risk of sequels not living up to their predecessors, “Running Out of Time 2” at least features some aspect which prooves the directors’ predilection for illusions, since they essentially create a film about the nature of performing. 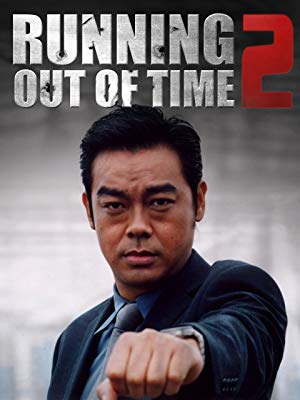 Several years have gone by since Inspector Ho (Lau Ching-wan) had to face a criminal who would deceive him and make a game of evading being arrested. However, he may have found a new challenge in a talented thief and magician (Ekin Cheng) whose plan is seemingly to extort money from an insurance company run by Teresa (Kelly Lin). Repeatedly evading arrest and making a fool out of Ho’s men, he eventually challenges the cop to a game of luck and chance which should determine the winner between both of them.

Whereas the first film dealt with the concept of time, its sequel is more about the relationship of fate, luck and chance, whether we are indeed the architects of our own fortune. Besides the frequent chases and dialogues between the two male leads, the most significant exchange deals with the unfortunate police officer Ken (Lam Suet) who has an unhealthy habit of gambling even if the odds are against him. In several sequences reminiscent of the infamous coin toss scenes in Tom Stoppard’s “Rosencrantz and Guildenstern Are Dead”, the improbability of the thief’s coin always showing tails and Ken always guessing it will be heads defies notions of expectation and order. While we certainly understand Ken’s growing frustration with the game and himself, we also marvel at the obvious absurdist nature of the game itself.

In a way, these scenes reflect the game the thief plays with Lau Ching-wan’s character for the most part of the movie. Given the thief’s obvious skill at manufacturing illusions and the foresight of his plan, the overall question of how much is chance or dependent on fate is not only a constant issue in this film, but in many of To’s other features. Subtly, it also hints at the images of the film being part of the illusion that is created here, the fact they may distract from the obvious with silly slapstick humor, another device To often uses.

Nevertheless, despite the ease with which To and co-director Law Wing-cheung handle some of the themes of the film, there are quite a few problems with this narrative and its form. First, there is the use of CGI – the repeated image of the hawk – looking rather silly and fake, a matter which cannot be excused by the aforementioned thematic framework of the film. And sadly, the same goes for the overall execution of the plot which frequently entangles itself in the funny, but pointless exchanges between Ho and his superior, as well as the notion of a romantic relationship between Lau Ching-wan’s and Kelly Lin’s character. To make matters worse, Lin, despite having the talent to make such a character work, seems to have very little to work with here resulting in Teresa being a very cold, calculating and overall bland character the film does not really need.

“Running Out of Time 2” is a thriller about chance, luck and fate, whose themes fail to disguise the many flaws in this film. While certainly containing a few scenes worthwhile and also some playful chase sequences, there is no denying this film joins the lines of so many unnecessary sequels made mostly for the sake to profit off a known property.