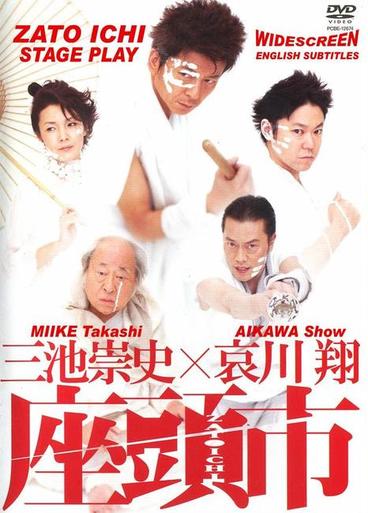 In an interview with IndieWire back in 1996, one year before the death of the famous Zatoichi actor Shintaro Katsu, Takashi Miike said “I plan to make some sort of jidai-geki. Traditional with kimonos, swords and Samurais, as “Lone Wold and Cub” or “Zatoichi”. Its going to be for all of the family. It will be a mixture of Shakespeare and Samurais.” He intended to cast Takeshi Kitano for the lead, but Kitano wanted to direct the movie himself and so Miike got kicked out of the project that he once started. Kitano continued the production and finally released “Zatoichi – The Blind Swordsman” in 2003.

But Miike, not known for being work-shy, picks up his idea again in 2007 to direct a stage play with Sho Aikawa as Ichi. In addition to crowd-pleasers like “Crows Zero” (2007), “Sukiyaki Western Django” (2007), and “Like a Dragon” (2007), Miike’s turn to the traditional Japanese theatre, Kabuki, proofs once more that he truly is a jack of all trades. Following his stage play “Demon Pond” (2005) the prolific filmmaker tries his luck on the stage again and gives Sho Aikawa his first theatrical lead role. The play was filmed during a live performance in front of a sold-out theatre and shown on television in 2008 and was later released on DVD.

In reminiscence of the good-old Kenji Misumi films (“The Tale of Zatoichi” 1962, “Fight, Zatoichi, Fight” 1964) the blind swordsman is caught between a feud of two yakuza clans while being chased by venturers who try to get the bounty for his head. On the stage, Ichi is accompanied by a renegade samurai bodyguard named Ryu, who is part of a love triangle consisting of Ichi and a wandering actress of a troupe. Besides the little love story, we get to see a lot of bloodshed and grief in classic chanbara manner.

The stage production is amazing. Moving sets with a lot of details and colorful ornamented costumes of the cast convey an authentic feel of feudal Japan. The smooth change of sets hints towards a well-trained production crew behind the scenes and the lightning as well as the music fit well to the everlasting mix of comedy, violence and romance that is performed on stage. On top of this, the fight choreography, although there aren’t so many (only towards the big finale at the end), looks very good. Using real swords, not toy-like preps, Sho Aikawa shows off his skills and delivers one of the most realistic Zatoichi performances since the late Shintaro Katsu. The whole 166-minute long spectacle is not to underestimate since it was shot in one take with no second chance of trying. Given these circumstances, very different from a movie production with multiple takes for one scene, Miike, the crew and the cast put on a masterful show. The cast is furthermore completed by Kennichi Endo (“Gozu” 2003) as a multilayered villain, Sadao Abe (“Birds Without Names” 2017), and legendary Hiroyuki Nagato (“Izo” 2004).

Other than in Miike’s former stageplay “Demon Pond”, the editing and cinematography to capture the play are not so intense. The manipulative elements of postproduction and the selection of different angles are kept low to a minimum. That’s why some may miss a certain cinematic approach since it is still more like a theatre experience. If you are into Zatoichi, a completest of Takashi Miike’s work, and also open to other art forms, then “Zatoichi Live” will be the right choice for you.