Sharipa Urazbayeva graduated from the Kazakh National Academy of Arts. In 2013, she passed the international internship to study the technology of film in Lisbon University Nova. She directed several short films that have become winners of the international short film festivals. “Mariam” is her debut long feature.

On the occasion of her winning the Golden Cyclo at FICA Vesoul for Mariam, we speak with her about the actual story behind the movie, the hardships she faced in order to shoot the film, women in Kazakhstan, and other topics.

Can you tell us a bit about your experience studying in Lisbon?

I studied there for four months, in a course dealing with cinema but mostly TV.

The movie is based on a true story. How close to the actual events is the film?

The true story of “Mariam” is about Meruert Sabbusinova, a woman who lost her husband three years ago. His body has not been found and so she cannot receive any benefits from the state since he is not officially declared dead.

Has the film been screened in Kazakhstan?

I made this movie just with my own money, without any help from the state, and the movie screened just two times after I finished it. It takes more money to screen it, since distributors thought that the public would not be interested in the subject.

So, has anything changed for Meruert after the screenings?

I first met Meruert when she asked for help on TV. After that, she worked in a restaurant and also as a cleaning woman. After the movie, she started ironing, that is the progress (laughter). After the movie screened, there was an article about her in the newspaper and the press has been following her actually, so that is also a change, I guess. Furthermore, after I arrived in Vesoul, the President of Kazakhstan stated that he wants to meet Meruert and probably some things will change in her life. However, the situation is difficult, since she is a woman and a lot of people in Kazakhstan actually hold her responsible for losing her husband.

What drew you to the story in the beginning though?

As I mentioned before, although I studied filmmaking, I was working on TV when Meruert came to ask for help. At the time, she could not even afford a lawyer. I decided to visit the village where Meruert lived and I could not fathom how she could live with her four children under these circumstances. Then I felt I wanted to shoot a movie about her.

Why did you decide to have Meruert as the protagonist of the movie?

Initially, I wanted an actress to actually play the role, but then I thought that no one else could play this part but her, since she is the only one who lived through all these events. I thought that this may be possible, and at the same time I thought that the money Meruert would receive from the movie could help her, while, to tell you the truth, I could not afford to hire a professional actress (laughter).

And you also appear in the film, as the owner of the flock of sheep, right?

Yes, I also had to act. There was another problem with casting since I could not get actors to come to the village from Almaty, which is 170 km away and one cannot reach the last part to the village (about 3km) by car, one has to go by foot or with a horse. The man who plays the policeman came to the area, and I send a horse to help him reach the village but since he was a bit overweight, the horse could not manage and he had to walk in the end (laughter).

The house in the film is Meruert’s?

Yes, she rents it actually, it is the house where the shepherds of the flock live.

What about the rest of the actors, Mariam’s husband and the policeman in the office?

They are my friends, and I asked them if they would like to participate in the movie. I had 6 people for the movie, since I could not afford to take up more. The husband is also the assistant director.

The scene where they kill the sheep, is it real?

Yes, it is real. We had stayed there for five days, and since we needed to eat something, Meruert’s brother brought the sheep, and I thought we could use this scene in the movie.

And was it tasty? (laughter)

Yes (laughter). After the scene, we made a traditional Kazakh meal with it, called kuurdak.

How about the kid beginning to kill the sheep?

The boy tried in the beginning, but since he was very young, he was not strong enough to do so. Then Meruert did, but this was the first time she did something like this. She thought that since her husband is not with her anymore, she had to do it.

How long did you shoot there?

We shot for five days but to travel the road we needed two more days, since we started from Almaty at 10 in the morning but we did not reach the area until 5 in the afternoon. During this week, I could not shower and in general, we could not stay more since there was neither water nor electric power in the place.

How much did the film cost?

In the film, Mariam’s friend manages to forge her husband’s death papers, an action that could be described as corruption. Would you say that there is corruption in general in Kazakhstan?

In reality, forging such a certificate would be extremely difficult. In the movie, Mariam’s friend “buys” it in a way, but in reality, he would not be able to do so.

How difficult was cooperating with the non-actors, mainly Meruert and her children?

The first two days were very difficult for Meruert, who was shy in the beginning, but gradually, she got into role. I know how to work with a crew so I did not have any particular difficulties with them.

Can you give us some more details about the ending?

In order not to return the money to the state, she kills him, because the law would demand from her to return all the money she received. Since she could not possibly do that, she felt there was no other way. I did not want to show this scene of the murder because a friend of mine, who is also a director, told me that it could imply something very bad for all the women who have lost their husbands. So, in the end, I decided to retain an open ending in order for the audience to imagine what happens instead of being spoon-fed.

In your opinion, what happened to Meruert’s husband?

I do not know, Meruert even went to some psychics to find out and she heard a lot of things, there were some that even said that aliens abducted him (laughter).

In general, what is the place of women in Kazakh society?

The society is patriarchical, and women are considered second class citizens, “beneath” their husbands.

What is the situation with Kazakh cinema?

There are many movies being shot every year and there is also a Film Institute, which helps, though, only historical movies, the ones that refer to the first president of the country for example. Independent movies receive no support from the government

How about women directors?

There is Zhanna Issabayeva, who has now gone to the US. There are two more, lesser known, but in general, it is difficult for women directors in Kazakhstan, particularly after they get married.

There are two, one of which is in Almaty, where I work.

Are you working on any new projects?

Up to this point, and although I knocked on many doors, I did not find any response. I hope, though, that I will receive some help in the future, and I have a plan for a new movie. 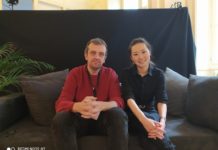