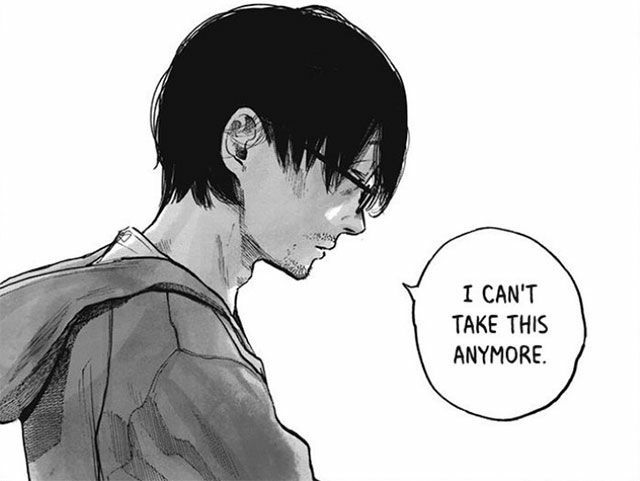 Facing divorce and burnout from his job, a veteran mangaka begins to withdraw from his profession and chooses to find solace in call girls. Through one relationship, he begins to build himself back up, but must first conquer ghosts of the past and self doubt to regain confidence to continue with his craft.

There is an existing sentiment that if you want to kill enjoyment in the thing you love, do it as a career, and although this statement seems counter intuitive and situational, work has the ability to destroy a passion. With that in mind, “Downfall” acts as a upsetting meditation of this sentiment, with the protagonist (who bares a striking resemblance to the mangaka) finding himself completely withdrawn from his work. This withdrawal comes from a troubled relationship, past memories of failure, and disenfranchisement in what defines popular content. This disconnect will find some familiarity with fans of artistic mediums, with trends or popular opinions existing in contrast to their own personal perception of the thing they love. This leads to another adage of you can have many great experiences within your career, but the one bad experience will linger longer. “Downfall” succeeds best as embodying the combination of burnout and disconnect with one’s passions, and the ability it has to disrupt ones personal views and actions during moments of respite.

It becomes easy to categorize this manga as being overly depressing, particularly with Asano’s work often acting as a mediation on dealing with mental health issues. However, “Downfall” does take a seemingly personal touch, which confronts the issue from a different perspective than what fans of Asano may be used to. The admiration of his fans who champion him as a strong voice for mental health see the author broken down to the point where even adoration from fans leaves him feeling hollow. This approach can feel confrontational to the reader who see the mangakas’ work as therapeutic and Asano himself to be a voice towards better change through understanding. Understandably, it becomes difficult to see such a figure focusing inwardly to show their own struggles, and the amount of empathy towards the character builds as the audience wants to see his transformation back into the adored figure. Ultimately, the common themes of loss, mental anguish, broken relationships, disassociating behavior within Asano’s work, for better or worse, takes on a more weight than his previous work, due to the inward examination.

With a manga which sees great success in narrative structure, it is a bit disappointing that the visuals fall short of Asano’s previous work. His panel work and drawings don’t suffer in themselves, but rather lack those gorgeous panels that express emotions and story with few words. For fans of his series like “Goodnight Pun Pun” and “Nijigahara Holograph” the lack of defining panels is going to be a let down. Unfortunately, “Downfall” contains little in the way of memorable imagery and will probably limit the long term appeal of this work when comparing to the rest of his bibliography.

“Downfall” comes across as a highly personalized account of the creator’s struggles with mental health. In taking such an introspective look, the manga does serve to give a deeper understanding of Inio Asano’s personality, which makes it both rewarding and essential reading for fans. However, the manga is a far cry from the creator’s more notable works and would be a horrible starting point to bring new fans into the fold. Also hurting the presentation is the lack of strong visuals that is more prevalent in the author’s other publications. A sup-par entry from Asano is still an amazing experience, and although it does not reach the heights of his previous work fans will still flock to this edition and find reasons to love it, myself included in that group. If you are a new to Asano’s work, Viz Media, who also published this edition, have released many quality editions of more notable work.