In the vast plethora of shonen anime in the style of “Naruto” that dominate the industry, it is always good to find titles that manage to stand out, even if the differences are not extremely significant. “World Trigger” is one of those titles, which, although it follows many of the “rules” of the category, manages to stand out, particularly because it functions as the anime version of an intricate J-RPG. 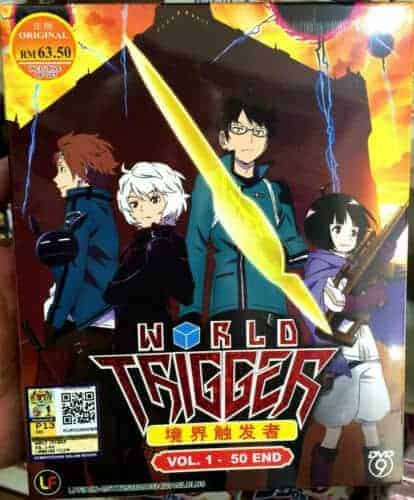 The setting of the story is Mikado City, where a gate to a different world has opened, “inviting” monsters called Neighbors in the area. Humans are overwhelmed in the beginning and the disasters are humongous, as regular weapons seem to be useless against the monsters. Eventually, a mysterious organization called “Border” appears, including a humongous structure in the middle of the area the first attack occurred, whose members seem to have appropriated Neighbor technology that can use against the monsters. This technology is called Trigger, and allows the user to channel an internal energy called Trion and use it as a weapon or for other purposes.

As years pass, Trigger is built up as a complex organization, recruiting and training volunteers in the fight against Neighbors, and through a number of different departments that include all the factors instituting a multinational company. At the same time, their training program allows them to function as an academy, with its members divided in classes A,B,C, with only the members of rank A possessing the most powerful triggers, comparable in strength to those of Neighbors.

Four years after the first attacks, a mysterious white-haired young man named Yuma Kuga transfers to a local school, and befriends Osamu Mikumo. Mikumo seems rather unremarkable but is soon revealed a C-class Border agent, and an individual with an intense sense of duty. At the same time, Yuma is revealed to be a humanoid Neighbor, with the two of them striking a peculiar friendship, with Osamu teaching the ways of the world and trying to keep his presence a secret from Border, and Kuga protecting him with his impressive fighting abilities. Soon, Osamu’s friend, Chika Amatori joins the group, while an enigmatic Border S-agent, Jin, seems to take the team under his protection. Eventually, all three end up in Border.

“World Trigger” begins slowly, with Mitsuru Hongo (episodes 1-48) taking his time to build the story and the characters until episode 12, and in essence to set the rules of the game. This tactic, along with the fact that new characters, backgrounds, abilities and rules are added as the 73 episodes of the first season progress, is what sets “World Trigger” apart, since its story is quite intricate and extremely well built. This approach is what points directly to the video-game aspect mentioned before, with the fact that the rules and the situation are thoroughly explained by different characters functioning like the tutorial part many video games include. At the same time, the fact that the characters improve through training and battles also points towards the RPG.

Furthermore, the part of the story that revolves around the inner-politics of Border, through the secrets, the machinations, and the various agendas adds more context along a political mystery element and making the title even more interesting. The role of the press, which seems to have become a permanent aspect of the latest shonen titles, as “My Hero Academia” also plays a significant part here, frequently dictating the actions of the protagonists. The concept of the hero, human nature, and particularly the way people accuse others, the importance of mentorship, friendship, and integrity, and the corporate world are also examined in the narrative, adding depth and drama, and deeming “World Trigger” one of the richest, contextually, anime of the category.

The title would have been great as a 100% serious story, but once more, the focus seems to be also on teenagers, with this aim being the main source of faults in the series. Cuteness, slapstick and misplaced comedy, and the preterit to the point of ridiculous reshaping of faces are also present, although not to a point that faults the overall narrative. On the other hand, the flashbacks to the previous episodes are brief if even present (with the element being one of the worst parts of “Naruto”, “Bleach” etc), in a tactic that definitely works for the anime and its binge-watching properties, although the fact that the opening is placed in the middle of episodes works against this.

One last flaw is found in the third part, roughly when Kouji Ogawa takes over directing the title in episode 49, with the arc revolving around Xeno, Lilith and Gieve seeming more like a filler than an actual part of the series.

The rest of the episodes, however, feature lengthy, intricate, and rather intense battle scenes, with the animation done by Toei finding its apogee in those. The magnificent thing about the battles is that the context built before and after them actually plays a significant role in the way they unfold, in essence adding much to their impact.

The characters’ drawing is functional but not particularly impressive, although with the number of characters involved in the story, that would have been an impossible task. Some characters look too much alike, but this part is something that the viewer can overcome as the story progresses and the individual stories are presented thoroughly.

Lastly, the series ends after an even more intricate set up has started unfolding, leaving the viewer definitely hungry for more, although due to various complications, the second season that was announced back in 2016, has not been completed yet.