Even though he concentrated more on writing scripts for the majority of his career, Yamatoya Atsushi also directed some of the most interesting entries in the “pink film”-genre of the 1960s. In the same year he collaborated on the script to Seijun Suzuki’s classic “Branded to Kill”, he also shot his feature debut “Inflatable Sex Doll of the Wastelands”. As with many of these kind of films, the label “sex film” is to some degree a smoke screen as viewing the actual film reveals an experimental genre mixture, dealing with topics ranging from toxic masculinity to the obsession with sex and violence.

After he has received a film showing his wife Sae (Noriko Tatsumi) being raped and violated by masked men, real estate agent Naka (Seigi Nogami) hires detective/hitman Sho (Yuichi Minato) to find and kill the kidnappers. After he has shown him the disturbing film, Sho ventures into the dark alleys of the Tokyo’s underworld in search for the men responsible.

However, as he finally manages to find Sae, Sho fails to inform Naka about the event and instead gives in to his own growing obsession with the woman. At the same time, the kidnappers are on his trail, filled with thoughts of revenge and willing to take back the woman.

Considering the references and collaborations regarding scripts and directing duties, any viewer will immediately recognize the influence of directors from Seijun Suzuki to Nagisa Oshima in a film like “Inflatable Sex Doll of the Wastelands”. Nevertheless, this is not an indicator for lack of creativity or originality on Atsushi’s part, for his blend of eroticism and hard-boiled detective story manages to be just as visually gripping as the works of the directors mentioned.

One of the most significant aspects explored in the film is the connection between sex, violence and obsession. The few sex scenes featured in the film lack the kind of appeal you would expect from a “pink film”. Considering the monochrome black-and-white cinematography by DOP Hajime Kai, they feel rather disturbing, animalistic and violent. To some extent they may be a reminder of similar scenes in the work of David Lynch, especially “Blue Velvet”.

Given this context, the image of the sex doll serves as an interesting leitmotif within the film’s narrative and visuals. During his journey through the streets of Tokyo’s dark underbelly, the recurring images of female display dummies coincides with Sho meeting a prostitute. As he starts to insult her, takes away her lighter and eventually threatens her, Atsushi’s script introduces the notion of exploitation in this male-dominated society. At the same time, this notion is always presented as closely linked to violence, forming the foundation of a rather unsettling obsession at the core of the male characters in the film.

Apart from the aforementioned use of black-and-white film, the jazz score by composer Yosuke Yamashita deserves to be mentioned. Often underlining the obsessive nature of the characters, echoing the savagery and brutality of the events on screen, his score is an essential component within Atsushi’s film.

In the end, “Inflatable Sex Doll of the Wastelands” is a very interesting, visually enthralling entry within the “pink film” sub-genre. Supported by great cinematography, a provocative script and a wonderfully manic score, this film deserves to be explored and re-discovered by cinephiles all around the world.

Film Review: Eyes of the Spider (1998) by Kiyoshi Kurosawa 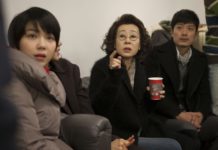