In 1959, Japanese director Akira Kurosawa was at the height of his success in his home country and had received much international praise for features such as “Rashomon” and the “Seven Samurai”, works which have defined Asian cinema and how it is perceived throughout the world to this day. To have more creative control over his works, a huge step in that direction was the foundation of the Kurosawa Production Company, especially since his projects tended to become increasingly ambitious, even though it was also linked to a huge financial risk. In that regard, it is somewhat surprising Kurosawa would make a feature like “The Bad Sleep Well”, a work inspired by William Shakespeare’s “Hamlet”, his first film after the foundation of the studio given the film’s very critical view on post-war Japan focusing on how the affiliations of politics and corporations corrode society and democratic principles. 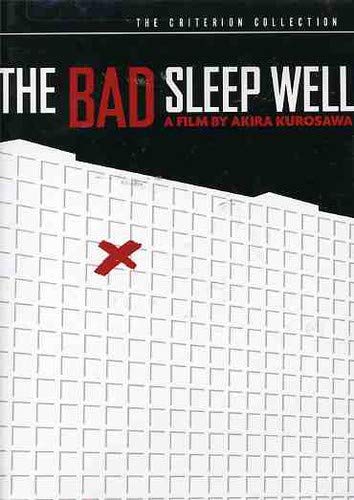 Even though it is supposed to be a happy occasion, the marriage of Koichi Nishi (Toshiro Mifune) to the daughter of Iwabuchi (Masayuki Mori), vice president of the powerful Dairyu Construction Company, is overshadowed by accusations of corruption and embezzlement against some of the company’s leading figures. In the past, the company’s name had been the center of many scandals, one of which had been the alleged suicide of one of their workers named Furuya who jumped from one of the windows of the company’s office building. In the days after the wedding, Iwabuchi’s employees, especially those who helped him covering up Furuya’s suicide, become the victim of various accusations, arrests and interrogations threatening the company’s reputation, as well as Iwabuchi’s position.

Meanwhile, Nishi, who has become Iwabuchi’s secretary, spends very little time at home, leaving his wife and her brother to worry about him overworking. However, Nishi, who is actually named Itakura and also the illegitimate son of Furuya, is already planning his next steps against Iwabuchi and his helpers since the events of the last days have been part of his revenge scheme, whose aim is to ruin the company’s good name and expose Iwabuchi’s corruption to the public.

In comparison to other works by Kurosawa, especially the samurai-films, “The Bad Sleep Well” is a much more claustrophobic and dark film by the director. Utilizing film noir-aesthetics in terms of lighting and cinematography, the world the film shows its viewer is defined by a strict hierarchy, in which appearances mean everything while the machinations of power, rigid structures and corruption shape the daily life of the people. In general, the people are something of an abstract entity in this microcosm of power, even more so than in Shakespeare’s play, giving the impression that decisions are made with the sole goal of self-preservation and self-benefit. It truly is a world in which the bad sleep well, as Nishi/Itakura mentions in one of the key scenes of the film.

Taking center stage in the film are the performances of Toshiro Mifune and Masayuki Mori, although Kurosawa has assembled a great cast in general. In contrast to the characters he has played in the past, Nishi/Itakura is something of a cipher to his environment as well as to the viewer for quite some time, even after his true identity has been revealed. Repeatedly he claims he “hates” people like Iwabuchi, while also stating he “does not hate enough”, a core contradiction in his role, for it gets in the way of more decisive actions, as he explains on multiple occasions. On the other hand, Mori, along with other members of the cast, plays a man accustomed to power, reputation and wealth, a true member of the elite who does not hesitate exploiting those dearest to him, keeping them at distance.

On a visual level, the interiors, the majority consisting of offices, highlight the restrictive and claustrophobic notion of the film. At the same time, settings such as the destroyed ammunition factory, where Mifune’s character used to work before it was bombed in an air raid, may be seen as a metaphor for the past of this country which only exists in tales of nostalgia, dead memories of pride and dignity, replaced with the anonymity of office buildings. Perhaps, Yuzuru Aizawa’s cinematography even emphasizes how the characteristics of this new Japan corrode the private sphere since the visual approach seems not only to be the same, but also highlights the growing sense of isolation for those still driven by emotions outside of greed, the hunger for power and profit.

In general, “The Bad Sleep Well” is maybe one of Kurosawa’s darkest films, a work defined by pessimism and a grim portrayal of post-war Japan. However, in terms of visuals and acting, it is quite complex, rich and dramatic, an interesting addition to the director’s body of work.

Film Review: The Sword of Doom (1966) by Kihachi Okamoto