The gambling movie is something that seems to have become a genre of its own over the years in Hong Kong. From the Hui Brothers’ “Games Gamblers Play” to the numerous spin offs of Jing Wang’s 1989 classix “God of Gamblers”, nothing better represents HK society’s aspiration for wealth. Indeed, “The Gambling Ghost” hedges its own bets by featuring three Sammo Hungs! 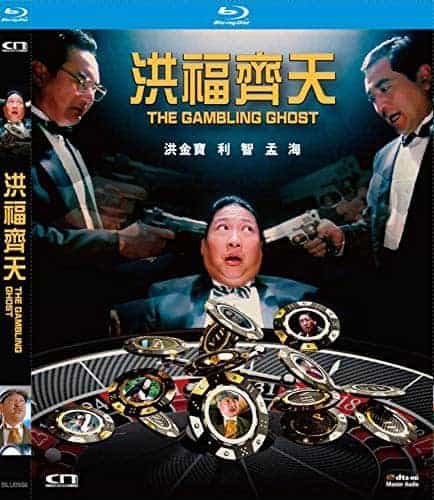 Fatty (Sammo Hung) is a failing gambler working as a valet, whilst continuing to disappoint his more straight laced father (Sammo Hung). An encounter with a car thief (Nina Li Chi) finds Fatty losing his job and one of his friends (of whom is captured by gangsters). His grandfather (Sammo Hung!) returns as a ghost to help, promising to make him wealthy if he takes revenge for his murder. Hijinks and flying fists ensue as the wayward Fatty finds himself unable to avoid a final confrontation.

As ever with the majority of movies during this prolific era of Hong Kong production, the characterization is as minimal as the pace is quick. Despite playing three roles, the characters are really only surface sketches for Sammo Hung; there isn’t really any depth other than a change of clothes. Nina Li Chi gets yet another underwhelming role for a pretty good comedienne. She exists as a plot device and nothing much more. The fun comes from spotting the cameos that usually frequent these productions. Watch out for the likes of Richard Ng, Stanley Fung and Lam Ching Yin being rather typecast. Clifton Ko is a director best known for his comedies and directs here competently without any real visual flourish.

Sammo Hung was always an innovator and had combined martial arts and the supernatural with his “Spooky Encounters” movies and here the writers throw in gambling elements to create a veritable stew of a movie. The problem is it throws in too much and lessens the effect. The comedy is broad as per Hong Kong standards and seems in a haste to jump to the next scene without really tying things together. It’s not really a movie to think too hard about as, if you do, it falls apart.

Even a middling Sammo Hung production though, can contain some excellent fight choreography. The mid-point clash with the gangsters contains a mixture of comedy and wirework and is very reminiscent of the similar, Sammo starring action/comedy “Where’s Officer Tuba.” Whilst entertaining, the real set piece is the finale.

If you ever want to judge the standard of action choreography then see how Billy Chow looks in a Sammo Hung feature than in virtually any other movie he appears in (honourable exception being “Fist of Legend”). The kickboxer and veteran heavy (You’ll recognize the face) gets a showpiece of his skills. Watch how the camera follows through with one of his kicks to emphasize his power. It’s the little touches that made Hong Kong fight scenes superior to Hollywood’s at this time. Sammo Hung gets to show off his power too in a brief flurry at the finish.

By no means a masterpiece, it does what it sets out to do and entertain. Sit back, enjoy, and you will probably have forgotten most of it by morning. It’s 85 minutes of broad comedy and decent action. Nothing more, and nothing less.