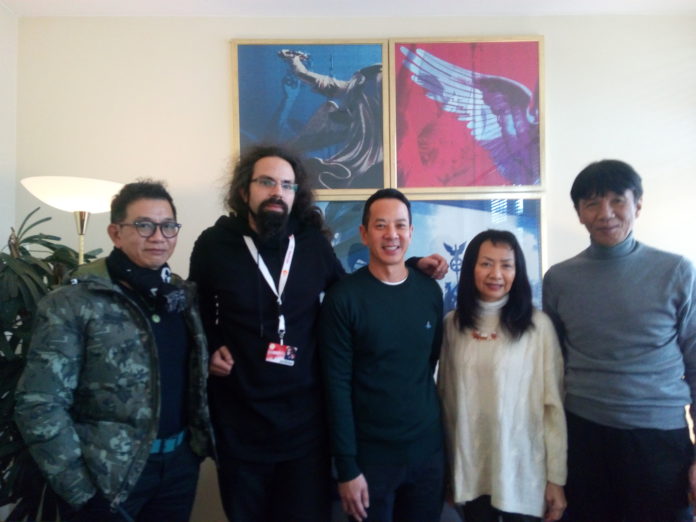 Ray Yeung is a filmmaker whose previous feature film “Front Cover” (2015) made a splash on the festival circuit, winning a number of awards in process. He is about to continue the award-winning tradition with his newest film “Suk Suk“, which is also Yeung’s first film made in his home country of Hong Kong and in Cantonese language. After the premiere at last year’s Busan International Film Festival and making a mark at the Taipei Golden Horse Film Festival, “Suk Suk” had its European premiere at Berlinale’s section Panorama. Asian Movie Pulse sat with the director and the trio of actors for an interview.

Ray Yeung: No, no, no. Suk suk is a Cantonese word, it means “uncle” or “uncles.” It is not Urban Dictionary type of meaning. It does not necessary mean a member of extended family, „uncle” can be a father’s friend, basically any older man.

But, in a way, the film is about “cruising”, about coming to terms with, accepting own sexuality at a certain age, so that is why Urban Dictionary kind of meaning is a reference of sorts. What was the idea behind the film?

Originally, I lived abroad since I was 13, so I wanted to make a movie in Hong Kong and in Cantonese, since I never did it before. So I set out to do it. I did a lot of researching and came across this book, “Oral Histories of Older Gay Men in Hong Kong”, by Travis S.K. Kong. It basically consists of twelve interviews of men in their 60s or 70s, they were that age at the time. Most of them were in the closet and most of them were working class. They did not really have a lot of education, so they got married very young, carried on their family names and were never really in touch with their own sexuality, until much later on. When they were older, when they felt they have satisfied their values and duties, they sought to find who they really were. So that is basically, it is about those interviews and those men and what I found especially fascinating and interesting. I contacted the writer of the book and asked him to introduce me to some of the interviewees. Some of them passed away already, but some of them were still around, so I met up with them and after meeting them I found that their stories were even more interesting, so I thought I should write the script based on this idea. The film is inspired by the book, but even more with the interviews and the people, I got to go see them, to go to their homes and to witness how they lived. Interestingly, some of them came out when they were much younger, in their 20’s, but they were very much rejected by their families and they were living alone, by themselves, and really depending on social services for a lot of things, and I found it also really interesting

So I presume it is the reason for the socially aware aspect of your film and the need for the nursing home for the older gay men as the sub-plot of the film.

That is a part of that as well, one of the stories…

Yes, and I think that most societies are, we are living in that kind of world anyways. Not just Hong Kong, but also United States, the UK, France, Germany, it is all the same. We are all assumed to be heterosexual. People ask you “Are you married?”, the official forms ask you “Are you married?” They do not ask you if you are gay, so they assume that you are straight. In Hong Kong particularly, because of the society being very traditional in many ways. I mean, it is not illegal to be gay, but at the same time the society strictly pushes that kind of philosophy very strongly. Although, the younger generations are different, so the people born in and after the 90’s tend to be more individualistic.

So, things change in Hong Kong for the gay community. Are the gay marriages legal now?

No, not yet. In Taiwan they are, but not in Hong Kong. But it is not illegal to be gay any more.

But there is less closeting now in the younger generations?

Yes, but the film is really about the older generations. Because at the time when they were young, being gay was illegal. I think it was in the early 90s they changed the law. Those guys really „missed the boat”. So they have their own, different point of view about what being gay means. In that sense, the main character Pak probably did not have much information about what being gay is about, so for him it is a very, very, very different mentality. By making the movie, I also wanted to show to younger generations, thinking why those old people could not come out themselves, that for them it is not about the “why”, because they spent their whole lives building families and it was the most important thing to them, and now, by coming out, they betray what they have been doing all their lives.

One question for the actors, about getting into their characters. Was it hard to get into that kind of a specific situation, into those very particular characters? Was it a lot of work?

Tai-Bo: I think you should have a broader perspective and more understanding towards this film. It is not just an LGBT movie or a movie just about sexuality. For me, it is more about a human being in a modern society where everyone is not just facing a challenge about gender or sexuality, but we are also facing a lot of pressure of family and values and more things. As an actor who has been in the industry for a very long period of time with two or three hundred movies behind me, it is not too difficult for me to get into a film. I am not gay, but I have some close friends who are, so I have a bit of understanding who they are and what the problems they are dealing with. But, again, Pak, my character is also a father, and so am I. So, what I understand about Pak and “Suk Suk”, it is a story about a human being, so it was not too difficult for me to get into the role. I read the book and did some research on my own, so I could understand the frustration of LGBT people.

Ben Yuen: I am just thinking about how to answer this question. I find the main characters of the film to be actors of sorts themselves. Because my character, Hoi, actually fits into the role of a “female” partner. I think about the bathroom scene. Sure, he is a man, but also someone who caters to Pak’s needs, like a wife does in a traditional society. So this is the difficulty of Hoi’s character, and something that I payed attention to while preparing.

What is your personal relationship with the character of Ching?

Patra Au: Ching is a very unsophisticated, uneducated woman. I am not saying that I am sophisticated or educated, but compared to Ching, we are very different. We came from two different worlds. When I was talking to Ray before the shooting, we came to an agreement on all those background stuff. I gave him Ching’s „bio”, he gave me his work and notes on Ching. Later on, I also modelled Ching after my cousin’s wife. The main thing for her, as she is also a member of an older generation, is to maintain the status quo no matter what. Of course, “I” was upset, because he should not brought him to “my” daughter’s wedding, but, then again, she changes strategy a little bit, trying to bind his heart, by cooking different things, and then having the whole family around and being nice and quiet to let him see that it is his family, the foundation that they have built together, that it is their world around them. “We have come a long way, are you going to give us up for him?” That was my approach to Ching.

Ray, it is very subdued film, very discreet, but two things, style-wise, are outstanding: shallow focus and the gentle, piano music. Was the idea behind it to create the notion that for one character, only the other one exists in that particular moment?

Ray Yeung: To start with music, I think it was a deliberate choice not to use any kind of music in the beginning of the film as a way to describe the world they live in. It is very peaceful and calm, but actually very dry in a way, drab and not very colourful. And then, after they met and went to the sauna, when they start having intimacy, when they kiss and touch, it is the first time we hear music. As a character, Pak at first just wants sex, just a quick release, and then after they go on a date, go to the market together, then go to Hoi’s home, it is the first time he enters another world, that is the first time they have their intimacy. And that is the moment when the music starts. I did not want it to be about sex, but about the intimacy they share. The piano music is almost like a love ballad, in those little moments of intimacy, holding their hands, going to harbour, walking along… As it goes for the shallow depth of field, it is, after they meet each other, it is a love story, how they see each other, how they hold onto each other. Because, when they are with their families, everything is crisp, focused and precise, very systematic. But when they are with each other, I often use close-up to emphasize that. Everything else in their world fades away and they only see each other.

What about your creative plans for the future? Do you have another story cooking up in your mind?

I think I have to deal with the minority issues. All my films had something to do with LGBT issues, which are also a kind of minority problems. In this case, it is interesting that the characters in “Suk Suk” are also minority in a way, because of their age and sexual orientation, regardless of them being Chinese in a Chinese society.

Everybody is a member of the minority in some aspect.

Exactly. So, it is going to be a minority story. Which one, I have not decided yet. I am doing the research. With the last one, I started in 2016, and it was completed and released in 2019, so it took the time to research, write, cast, shoot… So it will take a while…

Interview with Kazuhiro Soda and Kiyoko Kashiwagi: Once you start manipulating, the film is all about ‘yourness’