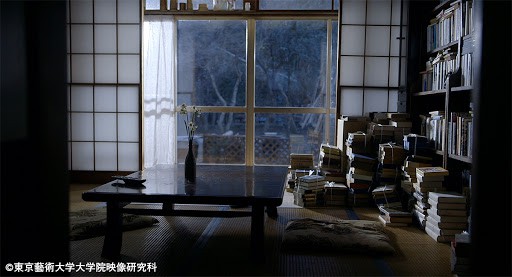 Tagawa (Takiguchi Yusho) attends the funeral of his friend Tono (Honda Shoichi). There he comes to know from another mutual friend Onuma (Ito Keitoku) that Tono used to talk about Tagawa during his last days. And for some reason, Tono did not want Tagawa to be informed about his illness. The narration keeps shifting between how friends cope with the demise of one of them and the past which is filled with vivid memories of Tono. Tagawa, a man of very few words is a successful novelist whom Tono admires. Tono himself had aspirations to be a writer and envied Tagawa. Onuma on the other hand, has been waiting for Tagawa to write something he would be able to read and understand. Sugawara (Takaki Kosuke) is another friend of Tono who tries to fill the gaps for the viewer. Where the past is depicted as conversant and fun, the scenes in the present show the dead Tono standing without expression in one corner as if waiting his turn. The mystery unravels eventually.

Onuma has the best acting part. He, in a way, reflects the viewer who is trying to read into the situation. The ghost element is used to keep the subtle intrigue going.

After his divorce, Tono quits his job as a teacher but on the insistence from Onuma, takes up the job of a taxi driver. Tono in a way was heading for the life of a recluse, which in his head, helped Tagawa become a novelist, but the unexpected illness lets him down. The recluse nature of a writer, though unintentional, has influenced him very deeply. Tagawa does not say one full sentence throughout the short and this leaves his character unexplored for the most part. This also fails to explain why Tagawa feels uncomfortable when Tono’s reference is made. Representation of the ghost remains only in the visuals, as sound is not used to supplement the experience. This gives the audience the space to go deeper without being distracted by the images.

The lighting used all through the short is very impressive. The funeral parlour, coffee shop, indoors, hillside etc are especially luminescent and indicate the timing and care taken for those shots. Kudos to the directorial and technical talent of Osugi Takuma.

Just like how the vase filled with daffodils symbolises aspirations that extend beyond a human lifetime, the short subtly delves into the life of a writer and explores the different kinds of people around him. This short should be watched for its script and the beautiful use of light.

Interview with Sidi Saleh: I just had a small idea whether an unfinished relationship can ruin your wedding.

Interview with Shinji Imaoka: Time as a healing tool for everything is a lie

Interview with Shih Chun-han: The most interesting part is the ambiguous combination between virtuality and reality

Interview with Lester Chit-man Chan: the soul of a society should be its people, not its government

The winners of the Osaka Asian Film Festival 2020