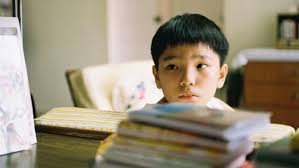 Everything slowly falls apart and deteriorates in the life of the Lim family. Anthony Chen’s “Ilo Ilo” follows the characters in their trying attempt at holding on to their middle-class stature in Singapore in the time of economic crisis. The family’s patriarch (Chen Tianwen) is made redundant; the mother (Yann Yann Yeo), and simultaneously the most tragic character, is few months into her pregnancy; whilst their son Jia Le (Jia Ler Koh) is a troublemaking brat who really struggles to behave in class.

The film is set during the economic crisis of 1997 that struck many Asian countries, Singapore included. One of the few elements that signal the timeframe is Tamagotchi, a handheld game that Jia Le plays. Apart from being  a marker of the past, it becomes a symbol of the boy’s escapism. The depressed, overworked couple make for terrible parents, and in an attempt at containing the ongoing crisis, they decide to hire Terry (Angeli Bayani) a Filipino housemaid. Although initially Jia Le is unimpressed by the new addition, he slowly begins to warm to her. It doesn’t blossom into a full-on Fruedian narrative (the way it evolved in “Wet Season”, Chen’s most recent foray into older woman-young schoolboy dynamic), but a bond between Jia Le and Terry fuels jealousy of the boy’s mother, Hwee Leng.

In this precisely constructed family drama, Anthony Chen manages to interweave the politics of the outside world with the emotional tensions of the inside of the flat. The film is quite rigid in its narrative, in a sense that even the smallest event is bound to trigger some sort of a tragedy or mishap to befall the Lim family. Such Greek-tragedy patterns play into the overall idea of the flat as a Singaporean microcosm.

The film’s political message is rather overt – the Lim family equals Singapore of the 1990s. Terry as a symbolic Other, the father as a failed authority and Jia Le as a fractious young generation – all of these characters are a sum of something much larger. Of those three, Terry is the least nuanced character, which is a shame given her importance in the narrative.

At the heart of it all is Hwee Leng, the imperfect matriarch. The most villainous of all the Singaporean-native characters, she’s a controlling figure who fails at performing all of her roles (mother, wife, boss, worker). All those defeats aren’t caused by her shortcomings, but rather by the grim circumstances and the other family members causing various troubles. In the end, her illusions lead her to a personal failure when she decides to trust the wrong person.

In this formally disciplined film, cinematography (shot by Benoit Soler) is employed to create a sense of voyeurism and uncomfortable closeness between the characters in the claustrophobic realm of their flat. It’s done through handheld shaky shots, as well as close-ups and a lack of non-diegetic music. Chen’s direction is correct (although lacking in any flair or particularly memorable scenes), apart from the moments when he chooses to rely on rather cheap symbolism. A most potent example are the ubiquitous and overused symbols of fertility and new hope in the film (chicken egg and young chickens, Hwee Leng’s pregnancy, Jia Le’s Tamagotchi).

In “Ilo Ilo”, just like in later “Wet Season”, Anthony Chen has clearly demonstrated that he’s a big Haneke fan. The Singaporean director, in a vein similar to the Austrian, likes to torture his characters, but “Ilo Ilo”, apart from exploring the sheer emotional struggles, takes on racism and class tensions. It is less flashy than, say, “A Land Imagined”, another film from Singapore about the hardships of immigrants. Chen’s toned-down aesthetic and a disciplined script allow for “Ilo Ilo” to fully move the audience.

Film review: Sun in the Last Days of the Shogunate (1957) by Yuzo Kawashima