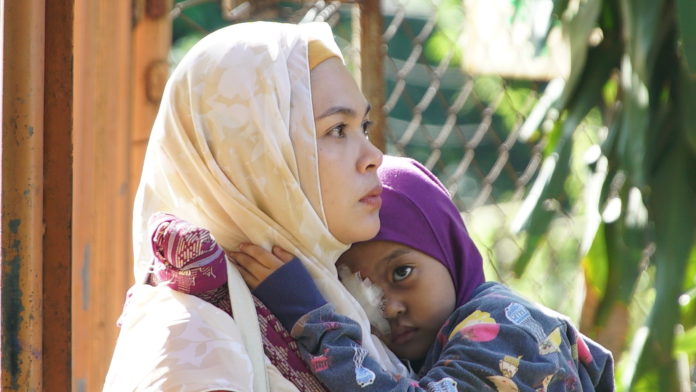 Mindanao, the second largest island in the Philippine archipelago, has been a place of violent conflict since the 60s, when President Marcos’s tactics that promoted Christian settling in the area, resulted in the displacement of the local Muslim population. The Maguindanao massacre (2009), the Mamasapano clash (2015) and the Battle of Marawi (2017) are the latest in a series of bloody events, and the area is still under martial law, following the orders of President Duterte. Brillante Mendoza places his latest movie in this troubled location, in an effort that netted “Mindanao” 11 awards in the 45th Metro Manila Film Festival, including Best Picture, Director, Actor and Actress.

The rather unusual narrative unfolds in three, radically different axes, which eventually and occasionally intermingle. The first one revolves around Saima, a Muslim woman, who is arriving in Davao, passing a number of military checkpoints in order to reach the hospital that treats her baby daughter, Aisa, who is suffering from brain cancer. When not in the hospital, Saima spends her time in the House of Hope, a place inhabited by women in similar situations, which functions like a commune, with everyone helping each other. Aisa, who is known as Queen of the Tube-Skirt Dance, is teaching other women, who are preparing for Kadyawan, a local festival where cash prizes are given to the winners of dance competitions, with the women aiming to use their potential winning to help their children.

The second axis focuses on her husband, Malang, who serves as a combat medic for the government army, fighting guerillas in the forests of the islands, and in essence being away from his family almost constantly. Apart from the omnipresent danger of being killed, Malang also faces racism from his non-Muslim “comrades”, since he is a local from Maguindanao, as is the case for the forces the state army is fighting.

The third axis presents a local legend, of Rajah Indara Patra and Rajah Sulayman, the sons of Sultan Nabi, who fight to stop two dragons devastating the area around Lake Lanao. This part is presented in an animation, in a style though that looks much like a children’s drawing, despite the fact that the actual animation is quite elaborate. A meeting in a hospital for all three of the characters is where the three axes come together, as Malang and Saima narrate the tale to Aisa, in the most adorably theatrical way.

Brillante Mendoza did not shy in the face of violence in his previous movies, therefore it comes as a surprise how restrained the presentation of war is in “Mindanao”, with the animation occasionally substituting the most violent aspects of war. As mentioned before, the presentation is rather unusual, and it is quite difficult to discern Mendoza’s purpose in the movie, apart from the obvious one, to highlight a number of aspects of life in the area. One could say that his effort was to present a war film that even children can watch, and in that regard, it can be easily said that he succeeds to the fullest.

Another purpose seems to be to present the humane side of soldiers, who, in this case, are presented as ordinary men and fathers, who are just following orders, with the concept of Malang’s sick daughter and his best friend in the army adding to that aspect. The same applies to the people of the area, who, according to some articles on the web, are quite frequently demonized by the press, with Mendoza presenting them as realistically as possible, if with a bit of idealization .

Saima is “used” to highlight the customs and the everyday life of the area, with her part of the story also being the main source of drama in the film, thus adding to the entertainment the title offers. Mendoza handles this part with a distinct sense of measure, not allowing the story to hit the reef of forced sentimentalism even for a moment, and in complete resonance with the movie’s overall aesthetics. The main medium of this approach is Judy Ann Santos, who gives a great performance as the struggling mother who tries to present a face of hope and happiness not to worry her child or burden the people around her. The sense of measure and the realism she exhibits mirror the general approach of the direction while making the few scenes she loses her composure even more impactful. Allen Dizon is also convincing, but in a much easier role, that mostly has him exhibiting calmness and a sense of tranquility, again with the exception of a couple of scenes.

Among the best aspects of the film are the moments when the animation and the live-action aspect transition from one to the other or are even juxtaposed on screen, with the tactic highlighting both the work done in the animation department and the excellent editing of Diego Max Dobles, who keeps the film flowing harmonically through its intermingling axes. Odyssey Flores cinematography focuses on realism, with “Mindanao” occasionally functioning as a documentary, as the camera follows the protagonists quite closely through a number of settings.

In an area where sentiments and particularly hate run amok, it is always beneficial for movies that present the actual circumstances with realism and calmness to be shot, and that is exactly what Brillante Mendoza achieves with “Mindanao”, through an approach that allows even children to watch it.

Documentary Review: Philippine No Wave: This Is Not a Film Movement (2010) by Khavn

Interview with Brillante Mendoza: Once you make a film that is about a social issue, it automatically becomes political

Next Film by Brillante Mendoza is a Story of a Japanese Boxer, With One Leg.

Film Review: Alpha: The Right to Kill (2018) by Brillante Mendoza