Right now, quarantine measures might get on your nerves but lament not. Some girls have been through much worse even prior to the pandemic, which is why Samira Makhmalbaf made Sib or “The Apple” in the first place. Endearing rather than sarcastic, this semi-documentary depicts the state of girls and poor people in Iran – the very victims of restrictive social norms and ignorance. So why not give yourself in to this heartwarming social commentary as you’re waiting it out? 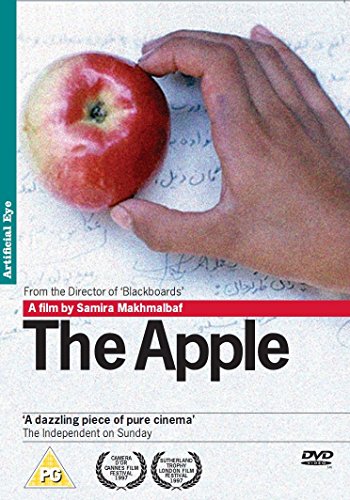 The film starts with a statement of facts and a plea for intervention. The reasons why it is needed is soon revealed: Zahra and Massoumeh – two eleven-something girls – have been found victims of their parents’ imprisonment. Ever since they were born, they have been locked up in their own home with no interactions with the outside world. Make no mistake about it, however, since there’s no child abuse going on here, or at least, not the vicious kind that people might feel entitled to condemn. Instead, the imprisonment of the girls is more an act guided by poverty and a misconceived notion that freedom and boys come with danger, which girls should be protected from. As local authorities and concerned neighbors step up, intervention efforts to release the girls from their home, an exhilarating re-discovery of freedom and joy in the world outside of the home by the two sisters ensues.

As a semi-documentary and a work of Iranian cinema – which is defined by its poetic minimalism, “The Apple” is devoid of gimmick, and the wonders of life are seen in minute details. There’s no frantic camera movement nor wide, panning shots: the frames are kept still, and at times the film feels like a stream of static pictures sewn together, though there are some full shots as the two girls venture further and further away from their parents’ protectiveness. Nothing extraordinary happens on the screen, but there’s magic in every moment that Zahra and Massoumeh are out of their confines. The pinkish-orange hues that dominate every single scene in the documentary embrace viewers with a kind of warmth and deep appreciation of life only to be found in Iranian films.

But the real charm of the film is its so-called non-actor cast, who truly elevate the narrative just by being themselves. The sisters – Zahra and Massoumeh – offer very authentic insights into the lives of girls in patriarchical, Muslim societies. Though their circumstance is indeed tragic, they grace through it with such innocence and gaiety that relieve viewers of any hate or anger at the plight that befalls them. Equally loveable is their 65-year-old father whose incessant mumbling and lamenting about his miserable life (which it indeed is) generate some very genuine laughter. The social worker, neighbors, and kids that accompany the girls on their path to freedom also add humor to the semi-documentary, with the little girl who keeps boasting about a watch that produces “choo-choo” sound being probably the most entertaining to watch.

The cinematic vision of Samira Makhmalbaf is well realized here, and the film does well on all levels – its aesthetics and social commentary. The film’s lyricism is not at all compromised by its realism, and the apple, or may I say, apples (which explains the seemingly irrelevant title), function both as a character in the film and a metaphor for a number of things. For those of you unfamiliar with the works of Iranian cinema, which in my opinion are among the finest, let “The Apple” be your guide to its trademark asceticism and poetic quality.