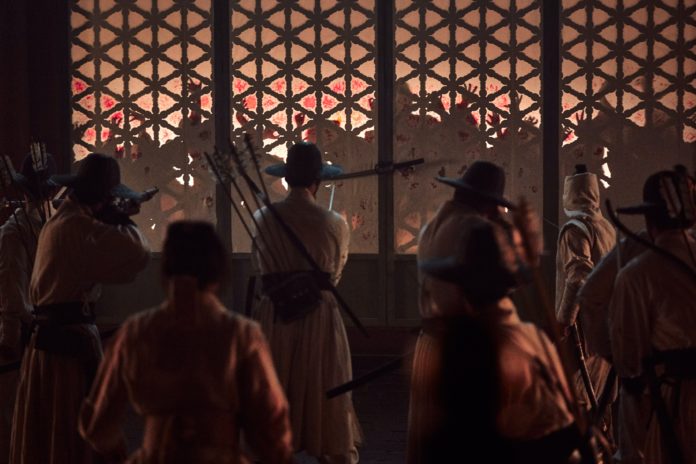 Ever since that horde of the Infected ran towards a fortified Sangju in broad daylight in the cliffhanger season finale of Kingdom Season 1, fans have been waiting to find out how Crown Prince Lee Chang and company survive that attack and indeed, how is it that the Infected, who had until that point only been able to come out once the sun set, are out in the open and still very bloodthirsty even in daytime. Well, the new season of the show has finally hit Netflix and it finally answers those questions for you.

After barely surviving the horde of the Infected that rushes towards them in broad daylight, Lee Chang and the group of his faithfuls manage to escape to Sangju, but things don’t seem to be safe there either and rations are running low. In a rather bold move, he decides to head for Mungyeong Saejae, where Jo Hak-joo is holed up and vows to have his head. At the same time, Seo-bi and magistrate Jo Beom-pal, who we left last season surrounded by water and a group of Infected, continue climbing the hill to safety. Once out of danger, Beom-pal figures they should head to Mungyeong Saejae, where he hopes his uncle Jo Hak-joo won’t turn them away and they will be safe. Little do both the factions know that the long trip to Saejae is going to be the least of their worries, because Lee Chang possibly has an informant in his midst and Seo-bi is about the find answers she wished she didn’t. Meanwhile, the Queen ups her bid to get herself a male heir, even as the Royal Commandery Division (the Joseon equivalent of the police) begins to suspect foul-play at work in Naesongjae, where the Queen has retired until she gives birth, and start an investigation.

Save for a short pre-credits flashback, “Kingdom” starts exactly where it left us on that cliffhanger and more than lives up to its promise of an exciting showdown on the battlefield. Once the frantic first 20 minutes end though, the show settles in to include more political intrigue than attack after attack of zombie hordes. This works highly in favour of the show because, frankly, the attacks in the previous batch of episodes felt rather repetitive after a point. The political intrigue also does not disappoint and is of a higher level than what preceded. Where the previous six episodes left us with a lot of unanswered questions, here the show manages to answer most of them for us, and does so satisfactorily, while also leaving just enough new ones to justify another, hopefully final, round of Joseon v Zombies.

But that is not to say that it lets up on the action quotient in any way. In fact, in this regard as well, it leaves the earlier episodes way back in terms of quality and execution. Now that the Infected are not just limited to coming out when dark, the surprise appearances and attacks in the daytime make for truly exciting viewing. The opening attack in the first episode, the slow motion extended shot in the courtyard, the chase over rooftops and the final showdown on the frozen lake are among the best the show’s ever had. Where, as previously mentioned, the zombie attacks felt repetitive after a while in the previous season, writer Kim Eun-hee keeps reinventing them here. She is also surprisingly bold in writing off some important characters quite early on.

If, however, you were annoyed by the blatantly black or white characters previously, you will end up disappointed this time round as well. Characters are either the very epitome of good or evil; there is no middle ground, no depth otherwise, save for that one betrayal which is admittedly well done, if predictable. This is particularly disheartening because Kim Eun-hee is quite adept at character writing, as evident in her previous works like “Signal” and “Phantom”. The journeys the characters go on individually to fulfil their destinies, and in Seo-bi’s case to find answers, do somewhat make up for these shortcomings.

Ju Ji-hoon, Ryu Seung-ryong and Bae Doona all return in key roles and their performances are as expected from these superstars. Ryu Seung-ryong felt slightly underused in the show’s previous outing but he gets his moments to show his mettle this time. Ju Ji-hoon makes for an extremely likeable lead. Kim Sung-gyu doesn’t have a lot to do this time round as Young-shin, spending most of his time shadowing Lee Chang, which is a shame because he is one of the most interesting characters on the show and has the potential to act out some cool moments which sadly never come to be. The two big-name cameos near the end are fun to look out for and the second one, in particular, promises great things to come from the third season.

Historical k-dramas sometimes tend to have a “cheap” look because of budget constraints but Netflix’s millions ensure that that is not the case with “Kingdom”. The production design is of a very high standard, with lush costumes and majestic set designs making up for good eye-candy, specially when a lot of the scenes are lit up with on-screen lighting. One of my biggest complaints with films and shows of this genre is how a lot of the action involving the zombies (or indeed any monsters) happens at nighttime, where the darkness facilitates any shortcomings with the makeup or costumes to go unnoticed. But now that the Infected are not afraid to come out when it’s light, any issues would be easily noticeable and it is to the makeup department’s credit that the zombies look just as menacing, maybe even more so.

The second season of “Kingdom” is a triumph, which not only builds upon the already good earlier part but also manages to trump it. Bae Doona said in a recent promotional video for the show that season one was merely an appetiser and this is the main course, and based on what’s on show here, it is hard to argue with that. Here’s hoping that what follows next is just as good a conclusive dessert.

Trailer for Upcoming Korean Film “The Gangster, The Cop, The Devil” by Lee Won-tae