Even though “Shiraz” was directed by Bavarian director Franz Osten, an equally important man behind the making of this film has to be actor and producer Himansu Rai. Apart from making successful movies in India he was also searching for a way to make them appeal to both Western and Eastern audiences. When he met German director Franz Osten in 1924, this started a rather fruitful collaboration between the two men, resulting in such features as “Light of Asia”, “Shiraz” and “A Throw of Dice”. Using stories, such as the story of the Taj Mahal, as a foundation, the success of these films, according to writers like Gautam Chintamani, made many Indians look at their world “as something more than one merely belonging to an indigenous minority within a British context” (from “Franz Osten and the ‘Invention’ of Hindi Film”). 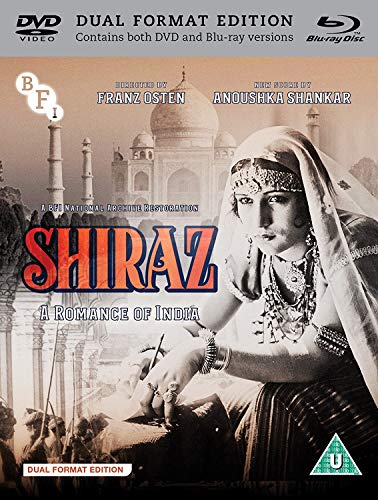 For many years Selima (Enakshi Rama Rau) has been living with the family of Shiraz (Himansu Rai), the son of a potter. In this time, Shiraz has become quite attached to his playmate but has never found the courage to tell her about his feelings. One day, a party of slave traders kidnap Selima and sell her on the slave market to an associate of Prince Khurram (Charu Roy). Unable to come up with the money and make people believe she was kidnapped, Shiraz can only helplessly watch the whole event taking place and from then on walks the ground next to the palace, hoping to catch a glimpse of Selima.

In the meantime, Prince Khurram has also fallen in love with Selima, has made her his favorite among his courtesans and eventually plans to marry her. This development has not gone unnoticed by Dalia (Seeta Devi), who had already set her eyes on Khurram as her husband and now has to come up with a scheme to get rid of her rival.

Bridging the gap between the interests of European and Asian audiences has to be one of the most difficult tasks, especially in that time with so many productions made by Europeans that only satisfied the exotic notions of many viewers. However, even a modern viewer cannot deny there is indeed an interest and curiosity in the images of a movie such as “Shiraz” that has nothing to do with exoticism. At the same time William A. Burton’s script, based on the stage play by Niranjan Pal, takes a more universal approach, telling a story about love, desire and betrayal with the setting having a vital role within the plot.

Especially with restored versions of the films, such as the one by British Film Institute, an audience can see what a truly beautiful film “Shiraz” is. Apart from the richness of the Indian landscape, the rural parts as well as the palace in the city, there is also a plethora of interesting, multi-layered symbols, such as the omnipresent image of water in the Prince’s chambers signifying wealth as well as power. The newly composed soundtrack by Anoushka Shankar compliments each image, adding to its richness and the overall atmosphere of romance.

In the end, “Shiraz” is a beautiful film about love and rivalry, a story about the eventual building of the Taj Mahal. The richness of its images, its score and the performances make “Shiraz” a film that has yet to be discovered by many more viewers.

Interview with director Sunny Chan and actor Tony Wu: “I will tell you a top-secret thing: the actual learning to Dragon race took only...