After stealing the contents of a locker, Daikoku discovers he is now in the possession of a hard drive containing birthright information about a segment of the Japanese homeless population. This data holds high value, as in order for one to work, get any sort of social assistance and even have a proper funeral, requires this information. With the data being able to be sold in order to give someone a new identity, Daikoku finds himself chased by various thugs, trying to retrieve the valuable hard drive. Daikoku holds on to this information because of a personal connection as he had his birthrights sold off by his father. He hopes to use the information as leverage to find out where his father is and exact revenge for past abuse and the sale of his identity. 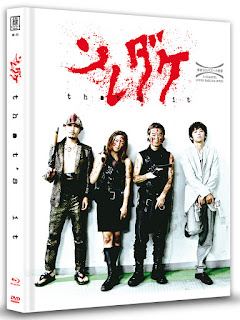 Being a petty thief going up a large gang, Daikoku’s capture is inevitable. After refusing to give the location of the information to gang leader Senju, our protagonist is tortured and left for dead. After being saved by Nanmu, a previous romantic interest of his, along with the help of other gang members wishing to have Senju murdered, executes his revenge on the gang leader.

The film’s visuals are its strongest asset, utilizing various angles and techniques to keep the viewer engaged, and the climax, in particular, utilizes fast pacing and shifting camera angles to capture the chaos. The production’s soundtrack deserves mention, (scoring his films has always been one of Ishii’s strongest and most persistent talent), and this film is no exception. The soundtrack provided by Blood Thirsty Butchers is interjected into almost every scene, giving it the punk/rock aesthetic that fans of the director have come to love, and is likely to be a treat for first time viewers of the directors work.

Unfortunately, the characters within the film are not really that strong, and their connections to each other and their motivation are thin, and as a result, it is hard to get really emotionally invested in any of the cast. With that said, the actors make the best of it and they do come across as cool and interesting in concept; it just would have been nice if there was a deeper connection, beyond their style, which is mostly punctuated by the cinematography. As a result, no character really stands out, but they all do play well within the narrative of the film.

“That’s It” is not Ishii’s strongest film, although it has his signature upbeat pace, while the appeal gets somewhat lost in the long run time and fruitless scenes. It lulls in the middle as the run time hurts the style, since it is great to have a fast paced, frenetic film, but the effect can only last so long before it starts to drag. Thankfully, the ending amps things up, but the middle of the film could have used some trimming to ensure the viewer was engaged throughout, instead of waiting for the climax to save the movie from mediocrity. Additionally, the absence of a greater social commentary or a metaphorical story telling, which normally punctuates Ishii’s productions, is also evident.

These shortcomings make sense though, as the production was not penned by Ishii. Bearing this in mind and looking just at the film’s visuals, this is still a strong entry in his filmography. However, for fans of the director’s work it is hard not to compare it to films such as “Electric Dragon 2000 Volts” and “Burst City”, in which you can draw stylistic comparisons, and realize that this film falls short of what Ishii is capable of producing.

With phenomenal cinematography and direction, there is enough of the Ishii’s talent present in the production to entertain fans of his work, and those unfamiliar with his filmography should enjoy the “That’s It” on it’s own merits.