The coolest loan shark of all times returns, but this time he has to face even more struggle than before.

“Ushijima: The Loan Shark 2” is streaming on FilmDoo

As with the previous film, the story revolves around a number of characters. Rei Kanzaki is male host at a club, where each person’s rank is measured according to the number and price of bottles their clients order. Rei has the ambition to be number 1, and is willing to go to extremes to succeed. Ayaka, a teenager who is desperately in love with him decides to help him, and is willing to go to even further extremes just to do that. Koji Aizawa is a father whose wife is constantly nagging him to get money, and also the leader of a gang comprised from underage kids dressed in military-style jackets. When Takada, a lowlife, and his friends steal his bike and destroy it, in a series of events that ends up with Koji stabbed by him, he decides to visit Ushijima, and ask him to loan money to Koji, in order to pay him for what he has done. Ushijima, impressed by Takada’s actions, hires him, only to fire him a bit later, due to his attitude. Takada then joins Koji in a plan to destroy Ushijima.
The loan shark also has to face the advances of a yakuza leader, who constantly asks for money from him, and a female loan shark, who also cooperates with the Yakuza. The only help he seems to get is from a friend of his, Inui, who seems to have connections everywhere. Lastly, Ebinuma, a homeless man seems to be obsessed with Ayaka, stalking her and becoming increasingly jealous of her relationship with him.

The film follows roughly the same tactic with the previous one, with Masatoshi Yamaguchi using a plethora of characters in order to present a number of social comments, regarding the contemporary Japanese society. In this fashion, this society is presented as one utterly corrupt, where money and sex seem to be above all, with the two of them having an interconnecting relationship. This comment is particularly presented through the male host club concept, where the employees actually function as gigolos to rich, older women, in order to persuade them to buy the most expensive bottle. The futility of the concept is evident through every detail.

Furthermore, sex seems to be the only way for someone to make real money, as presented by Ayaka’s arc, and through a phrase Ushijima utters to Rei: “Hard work is not enough to succeed”. In this corrupt and futile world, stripped from every value, Ushijima looks like the only honest one, despite the fact that he is a loan shark willing to stop at nothing in order to retrieve the money he is owed. 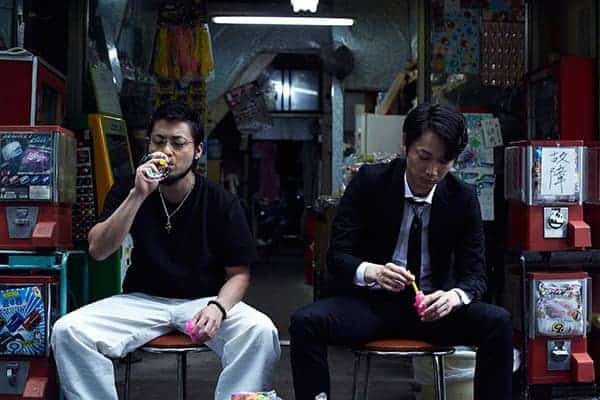 The film’s aesthetics are a bit more slapstick than the previous one, particularly through the acting of Hiromi Sakimoto, who plays Takada, of Maryjun Takahashi, who plays the female loan shark, and of Akiyoshi Nakao, who plays Koji. However, this hyperbole, is once more restrained by the realistically cool acting of Takayuki Yamada, who presents Ushijima in impressive, and totally anti-slapstick fashion, while Go Ayano, as his sole friend, also acts in the same way. Yuya Yagira is also impressive as Ebinuma, in a role that seems to have paved the road for the one he later held in “Destruction Babies“.

This second part seems to be on a slightly lower level than the first one, nevertheless, it is highly entertaining, and is bound to hook you even more to Ushijima and his adventures.