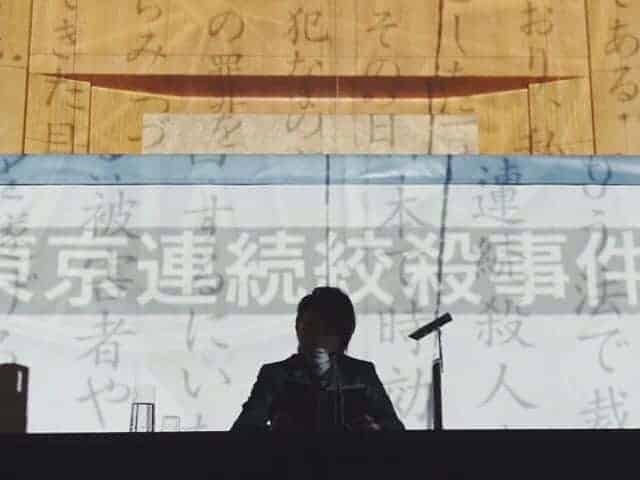 Based on the Korean hit “Confessions of Murder”, Yu Irie’s edition of the film tries to place a great story in a Japanese setting, and manages to include even more twists than the original.

The film starts with a mysterious man announcing the publishing of the book that describes the crimes he committed 15 years ago, just after the stature of limitations expire. The repercussions of his action affect the whole of society, since the crimes were never solved, and the man retains a rather offensive attitude, describing his crimes in proud detail, and acting as star. The media are all over the case, while the families of the victims are enraged with him. Policeman Wataru Makimura, whose sister is considered a victim, despite the fact the her body was never found, and whose partner was killed by the man, was the only man ever to come close to catching the perpetrator, even managing to wound him with a bullet in his shoulder.
As the events unfold in shocking speed and the theories crumble one after the other, major journalist and TV presenter Toshio Sendo becomes a central figure in the presentation of the case, while Makimura retains an enigmatic stance.

Yu Irie builds the intricate story quite elaborately, as his narrative includes news pieces, footage from the past, flashbacks, and many scenes taking place during a TV show, which give the first part of the film a sense that someone is watching an exclusive piece of news. The second part features more elements of an action thriller, as the film takes an obvious commercial turn, and the script becomes somewhat hyperbolic in the number and the nature of twists it includes.

In this setting, Yu Irie manages to include a number of social comments as the role of the press, justice, public opinion and the way it is shaped, the concept of idols in the broader sense, and the role of the police. Evidently though, after a fashion, all of the above are set aside in favor of the story.

The editing in the film is one of its better assets, with the editor (unfortunately I could not find his name) doing a great job in connecting the various visual aspects in a fashion that is everything but confusing. The last aspect though, also benefits by the changing of ratio and coloring in the scenes that take place in the past. Takahiro Imai’s cinematography follows the rules of the Japanese blockbuster, presenting a number of polished images that manage to set the mood of each scene quite nicely, although a bit detached. The realism of the scenes in the studio, both in front and behind the camera are among the highlights of his effort.

Tatsuya Fujiwara as the mystery man gives a quite good performance, which is stripped of his usual, misplaced exaltations, at last, as he presents a man who is evil and is not afraid to present his nature to the world. The scene with his editor is the highlight of his performance, as he manages to ooze evil and danger without doing much, just through his tone of voice and movements. I found Hideaki Ito’s performance unremarkable, as he presents a character that seems quite “dry,” despite the many occasions he had to shine. Toru Nakamura as Toshio Sendo is quite good, emitting the seriousness and professionalism his character demands.

Despite some faults, “Memoirs of a Murderer” is a very entertaining film, that will satisfy both fans of Korean crime thrillers and of Japanese blockbusters.

Death Note: Light Up the New World (2016) by Shinsuke Sato