Based on the novel of the same name (2010) by Risa Wataya and directed by Akiko Ohku , “Tremble All You Want” conquered the public’s hearts at the Tokyo Film Festival 2017 by winning the Audience Award. And the award is well deserved as this romantic comedy might speak to many people, as it goes beyond the film’s genre stereotypes and focuses on a more recurrent issue: how to love and confess.

Yoshika (Mayu Matsuoka), 24 years old, is a peculiar accountant that has a 10-year-long crush on her first love whom she calls ‘Ichi’ (Takumi Kitamura) from ‘ichiban’ which means number one. Yoshika is content with her life, talking nonstop about ‘Ichi’ with everyone, until one day, an event occurs that sets her mind towards finding ‘Ichi’ and confess. Meanwhile, her office friend Kurumi (Anna Ishibashi) tries to pair Yoshika with ‘Ni’ (Daichi Watanabe), referring to number two, who works in the sales department in the same company. ‘Ni’ is an energetic guy who follows his feelings and expresses it whenever he can, contrary to Yoshika, who finds comfort in her drawings and imagination.

Yoshika’s fantasy guides us through her journey of self-discovery and coming-of-age. Even though she is a working woman, she is still stuck in her high school time when she and ‘Ichi’ exchanged just a few words. Her meeting with ‘Ichi’ is a wake up call that shakes her reality.

The fantasy aspect of her life is everywhere in the film, from lighting to sound and cinematography to acting. The latter is revealed by the anime-ish gestures that the protagonist and other characters make. This Otaku version of reality can be summarised as a mashup of “500 Days of Summer” (the delusion part of Tom’s love affair plus the musical scene in the park) and the Chinese film “Our Shining Days” which centres on subcultures in high school such as anime fans and finding your true passion, and, of course, confessing your love to someone.

“Tremble All You Want” succeeds in combining an issue that everyone can relate to, stepping out of your comfort zone, and elements of anime, such as exaggerated gestures and lighting that shines on the heroes accompanied with dramatized slow-motions shots. This combination makes “Tremble All You Want’’ an entertaining film which pace is just right, as Yoshika’s unique behaviour enchants the viewer.

Having said this, it is worth noting Mayu Matsuoka’s performance, as she delivers a vast variety of credible emotions and brings Yoshika to life. Her chemistry with Daichi Watanabe is as awkward as the relationship between the characters that they portray, which makes it an appropriate match.

“Tremble All You Want” is a brilliant and amusing romcom. The film, although it might be predictable as all romantic films, depicts another type of story that incorporates a self-discovery journey attached to the protagonist’s disregard to a person’s name and what it actually means to be oneself. 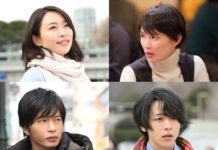 Film Review: Tremble All You Want (2017) By Akiko Ohku