In my last trips in Indonesian cinema, I have watched an art-house biopic (Solo, Solitude), a drama (Emma), and a thriller of sorts (A Copy of My Mind). I guess it was about time to watch a Western, although one much different from the American ones, since “Marlina” features a distinct feminist tone, throughout its duration.

As stated in the title, the film is split if four acts. In the first act, in genuine western fashion, a man enters Marlina’s house uninvited, pragmatically informing her that his gang will soon arrive, take all her money, her livestock and sleep with her, and there is nothing she can do about it, since her husband is actually dead, placed mummified in a corner of the room. Furthermore, and in a mockery of the customs of hospitality, she makes her cook dinner for everyone. This last order however, proves fatal, as Marlina poisons the soup, killing everyone in the gang but one, who, unknowingly, proceeds on raping the woman. Alas, his fate is not much different, since Marlina decapitates him with a machete soon after.

As the second act begins, we witness Marlina trying to get to the local police station, holding the severed head of the bandit in her hands. In her path she meets Novi, a pregnant friend who is on her way to her husband, Umbu. In another misogynist concept, Umbu thinks that her late pregnancy is due to adultery. Novi does not seem bothered by the head, and the same applies to another passenger catching the same car the two women get into, who is going to her nephew’s marriage with two horses that are to be presented as gifts. As the women have a conversation about pregnancy sex, the remaining members of the gang, Franz and Ian, make their appearance, forcing Marlina to flee in one of the horses. 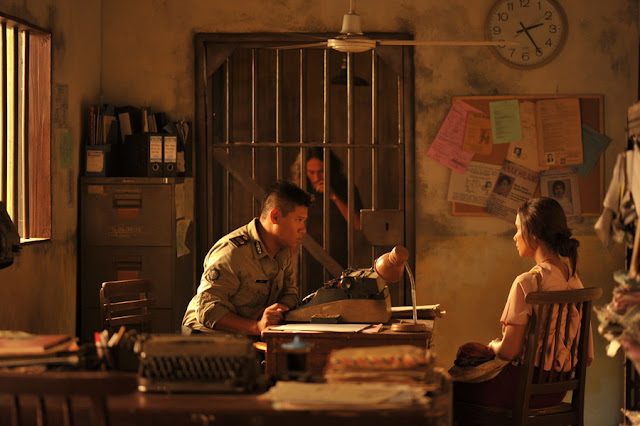 Eventually, in the third act, she reaches the police station, where she is treated with indifference, having some ridiculous procedures thrown at her face, while Novi has to face her husband.

Taking on the basic concept of the western, that “this is a men’s world”, Mouly Surya turns completely against it, by presenting a story that proves how wrong this conception is, as Marlina, Novi, and even the woman on the car are anything but. In this world, men are nothing more than ignorant victims, who fail due to the misconception that they can do whatever they want to the women around them. As they pay for their ignorance, the film is induced with a distinct feminist tone that seems to fit the western setting in surprisingly good fashion.

Through the four acts, Surya presents an odyssey of a woman who experiences an awakening about who she actually is and the world around her, with the end of the trip finishing a cycle in the most meaningful way, as Surya elaborately builds the sympathy of the audience towards the main characters. 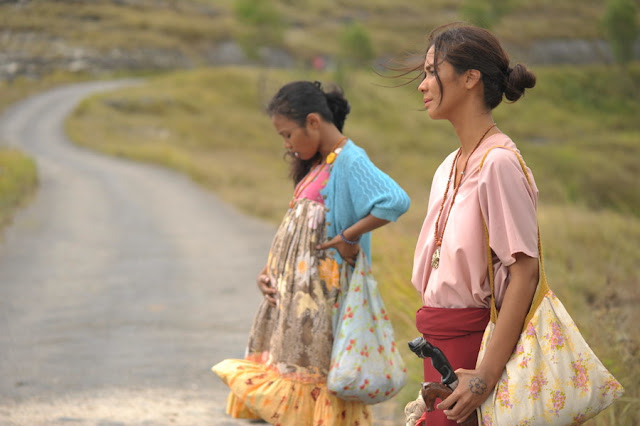 The movie is set on realistic premises, particularly regarding the living conditions in the country and the presentation of its culture, but some surrealism is not missing, chiefly through the concept of the decapitated corpse that seems to follow Marlina around. These moments however, provide the film with a unique sense of humor, which makes it more entertaining and “breaks” the art-house aesthetics that dominate, after a fashion.

One of the highlights of the production is Yunus Pasolang’s cinematography, that retains its artfulness in the two central settings, the house and the desert. In the first, the framing and the use of a single light are impressive, with Pasolang creating a claustrophobic sense that fits the events depicted perfectly. In the second, his long shots highlight the beauty of the desolate setting, presenting images of rare beauty of the desert. Zeke Khaseli and Ydhi Arfani’s score is another trait of the film, with a combination of Indonesian folk and classic western tracks that intensify the general feeling of each scene.

Marsha Timothy as Marlina is impressive, highlighting her character’s radical change through her trip, without exaltation, but chiefly through her facial expressions and body stances. Dea Panendra as Novi is quite good, presenting a lively character, unfazed by anything that comes their way, through a combination of naivety and courage.

“Marlina” is a film with very few faults, that manages to present a completely different take on the western, through an artful, meaningful and quite entertaining approach.

Interview with Mouly Surya: By making it a western, the story felt more relatable to me

Interview with Mohammad-Ali Talebi: You can still see works of quality coming out, but I feel these are the last attempts of an era...

Interview with Takashi Makino: My film looks like something very noisy and abstract, but actually, everything in it comes from our own world