Surrounded by an ominous presence and the death within her village. A young teenage girl finds herself becoming detached from the world around her. Feelings of isolation and detachment grow stronger as her relationship with her father is strained due to excessive drinking that causes a lot of untoward interaction. Her mother, a religious woman, seems more intent to put her faith into her beliefs than to save the broken family. A dependency on the father to support the family and an unnamed illness makes her complicit in her daughter’s detachment from the world around her. 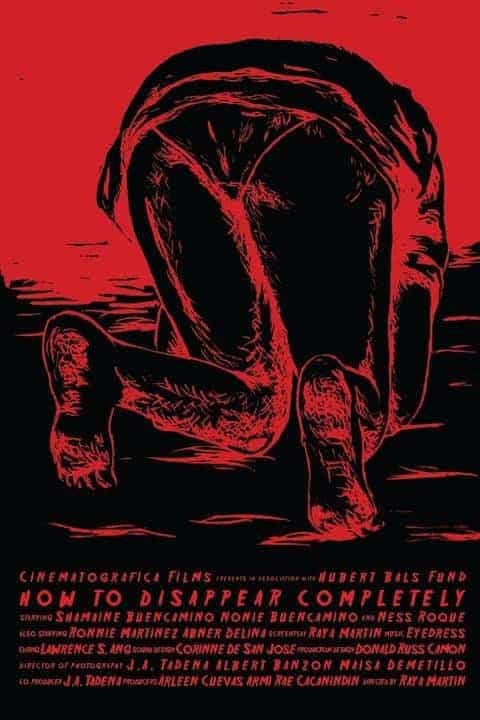 “How to Disappear Completely” delivers a “tale of disengagement” through short vignettes accompanied by a hypnotic electronic score. The film uses these elements to convey a highly stylized and mesmerizing tale that transcends your average tale of teenage angst.

The highlight of “How to Disappear Completely” lies within its visual storytelling, utilizing slow pans, serene and, at times, profound imagery. This is punctuated by an electronic score that floats into the scenes with well-executed timing. Raya Martin’s approach to creating a visual/audio experience is on par with western counterparts known to excel in this particular style. I am generally hesitant to draw name comparisons on any other creators content to avoid bias, but given that I think this film deserves a wider audience, I noted that the visual styling was reminiscent of Nicolas Winding Refn, in style, tone and presentation.  Within the film, there are other hints of Western influence, as Raya Martin commented in an interview that he was influenced by the style of John Carpenter for this particular production.

Taking the visuals into account, it may appear that the story takes a back seat and although while watching the film I found this to be the least interesting part, I believe it’s a straightforward and earnest approach, as the script builds a strong connection to the viewer. Most of the scenes are short monologues or dialogues that don’t really serve as much to deepen the characters giving the speeches, but rather to frame the life of the young girl and why her detachment harbors and becomes devious. The film also contains a fair amount of social commentary, and although there was a bit of a disconnect on my end due to limited knowledge of Filipino culture, there are still elements that are prevalent regardless. For example, looking at the aspects that make this, in part, a “Coming of age” film, relates themes of isolation and uncertainty that people can be empathetic to, regardless of their cultural upbringing. After watching the movie, I read some interviews of director Raya Martin, and although getting this background is not necessary for the enjoyment of the film, his insights into his work and society did add some depth and further appreciation of his work.

“How to Disappear Completely” is hard to place genre-wise, there are definitely elements of horror, given that the young girl does have these visions of this ghost-like figure that appears when she is facing deeper inner turmoil. However, given the timing and the way the creature appears, it becomes more of a mystery, as to if this entity is real or just a symbol of her growing resentment towards her parents/culture. Not being able to firmly place the film in one genre is more of a positive reflection on the content, as viewers will be drawn to different aspects and I think the experience with the film will vary based on the person viewing. There is a lot of depth within the story that, at face value, seems rather simplistic. With what I see being a varied experience and a strong visual presentation, I also feel the film would benefit from multiple viewings to gain a deeper appreciation of the content.

“How to Disappear Completely” really took me by surprise, it had a bit of a profound effect on me, and, despite of the cultural divide and the content, will resonate with me for some time. Although I embraced a movie deeply, I am still aware it will not be for all audiences. The score I can see deterring some viewers and the dreamlike way of creating this fable of youthful detachment from society won’t be to everyone’s taste. Overall, Raya Martins “How to Disappear Completely” deserves a greater audience, deeper recognition, and discussion.