As we look upon the pictures of our youth, whether they are from past yearbooks or snapshots with or friends, the magic of that moment in our lives stays on. Recounting the steps to one’s first date, the first trip without one’s parents or just simply the first days of summer vacation is mostly similar to taking a time travel for many of us. In the eyes of nostalgia, not only are we the best versions of ourselves when we are young, but also the quality of life was more intense and brighter. However, let us keep in mind how nostalgia also aims to filter out the many moments which are not that ideal or even ugly. Even directors, such as Andrei Tarkovsky, warned his readers in “Sculpting in Time” about the dangers of misguided nostalgia.

In the history of animation, there has always been this awareness of the “golden days” of youth, as well as the personal filter one applies to one’s personal history. Japanese producer Genki Kawamura, who is behind films like “The Boy and the Beast” (dir. Mamoru Hosoda) and “Your Name” (dir. Makoto Shinkai), has shown a certain predilection for stories set in that particular context. “Fireworks”, directed by Akiyuki Shinbo and Nobuyuki Takeuchi, is a project which was produced alongside “Your Name” and inspired by an episode of the same name for the animated series “If” aired in 1993. In an interview printed on the homepage of collider.com Kawamura states how the film was supposed to capture a “shining moment of youth” and the distinct atmosphere of “Japanese summer”.

Additionally, the project offered an interesting perspective on the notion of time with time jumps and loops also part of the film’s foundation. Akiyuki Shinbo, whose work on works like “Puella Magi Madoka Magica” is much admired by Kawamura, approached the project with a similar animation style as he did in his other works, a blend of 2D animation and the use of CG and Cel-shading technology. The final result, according to Kawamura, is quite stunning as it captures the magic of youth and nostalgia.

Moshima is a small town on the coast of Japan and summer season is in full effect with rising temperatures and local events. One of those is the annual fireworks at Moshima Shrine, an event Norimichi and his friends do not want to miss for the world. While the town is in preparations for the happening, he and his best friend Yusuke spend their days talking about video games, the pain of going through summer school as well as the girls at their school. As they are about to clean the school’s swimming pool, they come across Nazuna, a classmate of theirs, challenging them to a race.

Even though he likes her more than Yusuke, Norimichi is fine with the two of them watching the fireworks together, something Nazuna demanded in exchange for winning the race. However, as evening comes and his friends are about to go see the fireworks, Nazuna learns about Nazuna’s mother planning to move away. Realizing this day might be his last chance of seeing her, he aims to meet her and eventually wishes to turn back time and win the race from that afternoon. In the end, his wish is unexpectedly fulfilled with the help of a glass marble Nazuna lost.

Although producer Kawamura stresses how the two projects have been prepared independently of one another, for those who have seen Makoto Shinkai’s “Your Name” the parallels between his work and “Fireworks” are obvious. That is not to say the latter work copies from the other, but in terms of visuals, the handling of themes of romance and time as well as the design of the setting there will likely be some déjà vu-moments for some viewers.

At the beginning, Hitoshi Ohne’s script spends a lot of time capturing the setting along with the core symbols of the film. The cloudless summer sky, the crystal clear water, the bright lights of the windows and the omnipresent sound of waves create the perfect, almost postcard-like atmosphere. One almost expects the romantic comedy to delve into the slight fragments of drama along with the brooding bits and pieces of coming-of-age to fully blossom under these conditions.

However, as with “Your Name”, the surface is treacherous and the small signs and warnings are already in place. In the end, the lights are too bright, the streets too shiny and the voices too jolly to create something which might feel authentic or believable. Nazuna drops one of the central observations when she talks about the use of “eloping” instead of “running away,” which defines perfectly the perspective chosen here. One should never forget this is the tale of a young boy fully embedded in the pandemonium of puberty and seizing females by the looks of their backsides. Considering this is summer, his clique is there to accompany him and engage in endless conversations about girls or the nature of fireworks, the glossy surface should not come as a surprise. After all, this is the glorified vision of someone whose life holds nothing but good things in store.

Nevertheless, this perspective is also problematic in some cases, at times even misguided within the script. In his review of the film Derek Smith, for example, even calls the movie “sexist” for the focus on mere surfaces, the repeated shots of Nazuna’s behind, a male teacher’s talk about the breasts of his female colleague or Yuskuke rambling about sexually harassing a teacher are just some examples strengthening his point. At the same time, though, one should consider how surface, playing with reality and perception, has been one of the film’s narrative undercurrents from the start. You can maybe endure the glossy feeling of nostalgia, of glorification, to some degree, but after a while the vision, as well as its source (Norimichi) becomes just annoying. Yet another teenager who has to learn to take matters into his own hands rather than being passive and superficial all the time.

On a technical level, “Fireworks” is a stunningly beautiful film, with episodes going into the depths of surrealism even, as Mark Schilling points out in his review of the film. The combination of animation along with the aforementioned use of CG and Cel-shading creates the wonderful illusion of memory, of an idealized perspective and space and time. Satoru Kōsaki’s score, along with the theme song by DAOKO x Kenshi Yonezu, is a great addition to the visuals of the film and its themes. 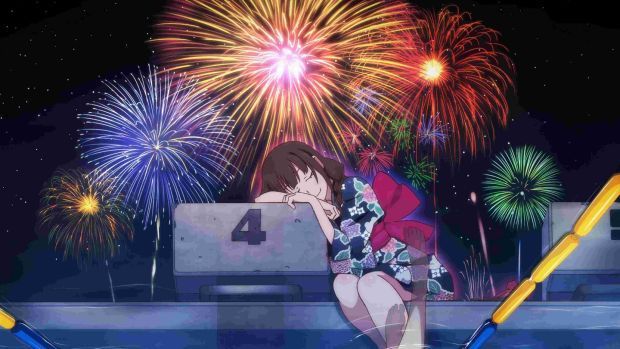 “Fireworks” is an interesting look at puberty, the themes of time and romance. While some of its narrative may not fare well with many viewers, the overall impression is still positive, especially on a technical level. In the end, much like the question occupying the minds of Norimichi and his friends, it is not about if fireworks are flat or round, but from which angle you have chosen to observe them. Or maybe you just shake your end, doubting the point of the question to begin with.

2) Schilling, Mark (2017) ‘Fireworks, Should We See it from the Side or the Bottom?’: Will Japan fall in love with another pair of animated teens?
https://www.japantimes.co.jp/culture/2017/08/23/films/film-reviews/fireworks-see-side-bottom-will-japan-fall-love-another-pair-animated-teens/#.W1eOcNIzY2w, last accessed on: 07/24/2018

4) Trumbore, Dave (2018) Fireworks Producer Genki Kawamura on His Follow-Upto Your Name and Its Inspiration
http://collider.com/fireworks-genki-kawamura-interview/, last accessed on: 07/24/2018

Film Review: The Brink (2017) by Jonathan Li Screening at Fantasia

Film Review: Rokuroku: The Promise of the Witch (2018) by Yudai Yamaguchi and Keita Amemiya, screening at Fantasia