One of Malaysia’s most controversial titles, director Dain Iskander Said created a firestorm of controversy with his 2007 film ‘Dukun.’ Based on a true story about a woman tried for witchcraft and other occult practices after the murder of a prominent politician in the country, the film ran afoul of the country’s Islamic censors who suppressed it for over a decade, before it finally started getting leaked onto the internet through various social media platforms.

Awaiting her execution, Diana Dahlan (Umie Aida, from “Clash of Empires”) recounts the story of her arrest. Several months earlier, lawyer Karim Osman (Faizal Hussein, from “Bunohan: Return to Murder”) is assigned to her case after being convicted of murder and witchcraft against a colleague and tries to win over the confidence to defend her. As the trial continues on, more evidence is revealed, not only about her connection to him but also about a deadly mystery involving his own missing daughter, while his motives about defending her become severely questioned.

Taken solely as a straightforward film, this has some rather enjoyable elements. One of the more worthwhile elements to ‘Dukun’ is when the film focuses on horror. Starting off with the discovery of the dismembered body found in the ritualistic condition and manners offers a strong entry point that is greatly enhanced by the rather chilling sequences in the prison. Forcing the inmates in the cell with her to act in mannerisms strongly suggesting possession, from contortion and speaking in tongues to licking the cell-wall and attacking those sent in to calm them down. These all make for a great setup into the later half where the film provides plenty of dark rituals shown in great detail. Featuring animal sacrifice, blood rituals and dismemberment alongside tribal dancing customs and various other practices, these scenes carry quite a fine sense of darkness playing off the ritualistic actions being presented, as well as offering up the quantity being showcased. The most chilling scenes that take place here are the further outbursts the possessed undergoes in her cell, shown to be visibly scratching her body and writing messages in blood which look brutal and quite graphic overall. 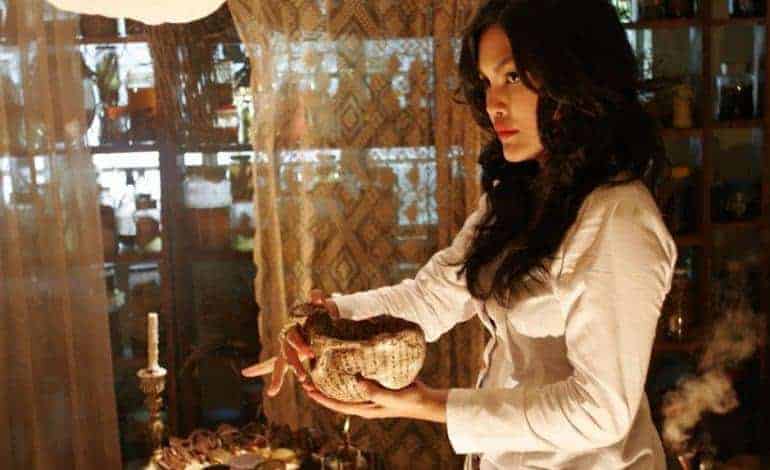 These are furthered mainly by Umie Adie’s powerhouse performance. This is one of the finest roles in the genre, whipping up quite an impressive range. Tough, confident and assured of her skills to an almost delusional degree, seeing her toy with everyone around her both in the courtroom and in the later scenes showing the flashbacks to not only further her claims but get the truth about the activities she performed. As well, the sensuality and faux-vulnerability she uses to seduce and toy with others around her make for an interesting contrast, which is a joy to watch. It’s quite a testament that she can switch from these roles rather convincingly and still remain dubious as to what actually happened, even if everything always points to the same outcome, causing her to steal the show from everyone with this performance. While Faizal Hussein, who plays her lawyer Karim Osman, also manages to deliver quite an impactful and varied performance as the man dealing with his daughter’s disappearance and still retain his composure enough for the trial where he makes several impassioned pleas to prove her innocence, that’s really all the noteworthy roles here. Everyone else exists as trial fodder or investigative means, so it stands out with its two leads but little else is memorable.

While these elements help raise the film, there are a few problems. The biggest drawback is the way it plays its storyline out. Since ‘Dukun’ is primarily told as a courtroom-based drama, it really doesn’t offer much interest for most of its running time. Sitting around listening to the two people go through the case doesn’t make for a compelling watch, as the technical jargon with all the different formalities and legal-speak that goes on in a trial rather boring to get through. As well, that also highlights the issue of the film mostly consisting of watching people sitting in chairs recounting memories, a process which isn’t that exciting. It’s a common trope of films set in courtrooms which manages to be highlighted once again here by ‘Dukun’ going through those motions for the majority of its running time. That makes the flashbacks to the interactions of the witchdoctor and how she performed her rituals to feel rather disorienting and chaotic, so the pacing is quite disjointed.

As well, the special mention should be made for the controversial nature of the film. From the start, most would suspect that there’s some extreme gore or sexuality to be present that would enable a country’s censors to want to keep a film hidden from the public for over a decade, yet that’s not the case. Instead, this one tends to work more on the blasphemy charge concerning black magic and Muslim views. With Malaysia a highly religious country providing very little wiggle room for details of the supernatural in this context, regardless of the grounded nature of the narrative, this is quite puzzling to watch playing out. That nature alone is what caused the controversy around the film rather than any kind of excessive salacious material that would normally cause such actions to be taken, which might be seen as a detriment to some hoping that would be the reason for its treatment.

In spite of the few minor issues that are shown to be holding it down, ‘Dukun’ has more than enough to really make for an enjoyable watch. Give this a watch if you’re interested in the film or curious about this one due the controversy, while those looking for a more extreme piece based on the history involved should heed caution.