“I can’t put my finger on it but there’s something wrong with her.”

When writer Tony Rayns met Japanese director for one of the first times in the 1990s, he spoke to him about his incredible output per year, which sometimes ranged somewhere between six to seven movies. According to Miike, the answer was obvious for he liked to keep himself busy with his films through the year. Additionally, rejecting a producer’s proposal, especially for an interesting idea, was something Miike could (and probably still can) not do, and in the end the people involved would find the right time and right place in his busy schedule to work everything out.

Interestingly, the year this encounter took place marks a significant milestone in Miike’s career. The Rotterdam Film Festival not only showed three of his movies – “Audition”, “Dead or Alive” and “Ley Lines” – but also made the world aware of this prolific Asian filmmaker and his art. Especially “Audition” left quite a mark on those who saw it for the first time during the festival, provoking extreme reactions in audiences. As Rayns recalls, one woman was hissing at Miike as he entered the stage for the Q&A after the showing and called him “dirty” (a reaction which left a bright smile on Miike’s face). In the following years, this movie along with his previous films as well as Miike’s continuous output of new ones defined his reputation as an enfant terrible, as a director of extremes. Most importantly, it resulted in a significant increase in loyal followers of this versatile director. 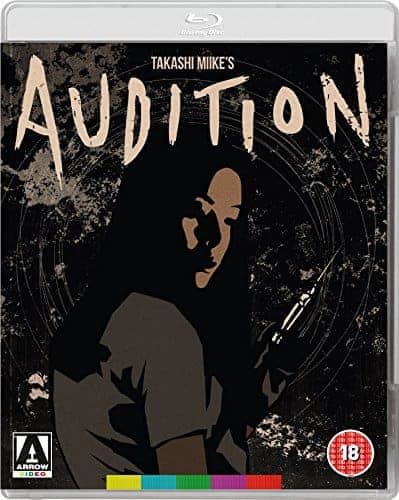 “Audition” is based on a rather “sensationalist” (Rayns) novel by writer Ryû Murakami, which was then turned into a screenplay by Daisuke Tengan, son of director Shohei Imamura, according to Miike’s wishes who saw the potential of the source material. Even though the project was a commissioned work, as many of Miike’s films at that time, it is by no means a story Miike regarded as cheap; in fact, given the deconstruction of male identity in films like “Ley Lines” or “Dead or Alive”, “Audition” fits right into those themes which have accompanied his work ever since he started doing V-cinema in the early 1990s.

“Audition” is a film about gender perception, how the image of a person is the combination of our expectations and wishes associated with him/her. It is a story about loneliness and indeed, just like “Ichi-The Killer”, shows romance at its most extreme.

Shigeharu (Ryo Ishibashi) has been a widower for seven years, dedicating his life to the education of his son Shigehiko (Tetsu Sawaki) as well as his job as head of an advertising company. Because his son notices his dad’s loneliness and how they both will be parting ways once he enrolls in college, he urges his father to get married again. Even though he understands the request and also wishes to have a relationship with a woman again, Shigeharu feels lost when it comes to talking to women nowadays or even going on dates, he confesses to his friend Yasuhisa (Jun Kunimura), a film and TV producer. His friend, however, comes up with a plan to help him: under the pretense of searching for a young female lead for an upcoming TV series they will use Shigeharu’s description of the perfect female companion as casting call with the following audition giving him the opportunity to meet what might just be the right woman for himself.

Even though he is hesitant about the procedure, Shigeharu’s interest is raised as he reads the CV of one of the applicants, a young girl named Asami (Eihi Shiina), one whose outer beauty as well as her melancholic essay make her stand out. After the audition, the two of them meet, although Shigehiko urges his friend to calm down, and quickly Shigeharu is convinced that he has found the right one for him. However, the more he checks up on her past or the stories she has told him about her past the more he uncovers the dark sides of his new love interest.

During their first dates, “Audition” seems to be going through the more or less usual structure of any romantic movie, involving a tentative romance developing between Shigeharu and Asami. Hideo Yamamoto’s camera switches between the male and the female gaze, point-of-view shots from both characters as well as over-the-shoulder shots, defining a certain distance between the two of them, imitating perhaps the footage recorded during the actual “mock” audition. Whereas one might see the idealized version of the other, following the stereotype of “love is blind”, while the other takes a more detached approach, demands to look closer and also be a bit more observant, not only of Asami but also of Shigeharu.

Generally speaking, Miike’s films are known for a significant switch in perspective, of building up tension in order to make the two seemingly contrasting views clash in the final act of the film. One of the best and arguably most popular examples might just be the structure of the “Dead or Alive”-films, especially the first one, in which Sho Aikawa and Riki Takeuchi play opposite forces bound to collide and explode (quite literally) in the end. Since Miike’s work, along with the films of many of his colleagues, continue the legacy of directors like Shohei Imamura or Kinji Fukasaku in exploring and further deconstructing traditional structures in the medium, “Audition” follows this strand within its director’s thematic approach. Shigeharu defines his perfect partner to be the exact opposite to him: young, emotionally scarred as well as unsuccessful in advancing a career, but still confident. In a nutshell, it is an image so specific the method his friend proposes is, despite its moral dubiousness, perhaps the only fitting method to find someone. No one is maybe more surprised than he is when he actually finds someone he falls in love with and rejuvenates to a point Yasuhisa thinks he must be talking to a teenager.

On the other hand, Asami remains an enigma to Shigeharu and the viewer. Even though the audience has received much more disturbing information about her than the male protagonist, her true nature is still largely unknown, hidden beneath the blurry images of her past, some of which have been inserted into the narrative as highly stylized dream sequences or fantasies of Shigeharu imagining the horror she must have been through. In a way, Asami might be much like Tadanobu Asano’s character in “Ichi the Killer“, especially since both show a tendency towards the bizarre, albeit Kagihara might be a bit more extreme for some. In a sensationalist framework, which Miike favors in many of his film, both are driven by the motivation of finding someone who understands, who sees their wounds and is able to support them properly.

Sex and masculinity have always been deeply disturbed or overlaid by the violation of the body in Miike’s narratives, with “Audition” defining perhaps one of the most known examples considering its last third. It is truly challenging finding a love- or sex-scene following a more traditional pattern in Miike’s body of work because of the reasons given in the paragraph before, but also since the most extreme, most physical of expressions is considered normal, almost natural in the cinematic universe of this director. On top of that, the extreme is more honest in comparison to the usual ways, or the methods used by the protagonists in many of his films. The audition process, a thinly veiled deception to meet as many girls as possible, to get to know them physically, suggests a serious disruption in communication between gender, perhaps underlined by statements like “Japan is finished” (Yasuhisa, as he faces a group of giggling girls in a hotel lobby) or “I’m scared of women” (Shigehiko about his blossoming relationship with a girl in his class). It is only in the most intimate moments the truth is unraveled, mostly linked to a confession of true love, of loyalty and never-ending affection (in the end, isn’t that what the protagonist is looking for?). Understanding the scars on one’s body, the history of one written on the physical form establishes a more truthful, more honest connection between two people, and sometimes this can truly be scary.

“Audition” is a film about romance and love, about extremes and honesty in a relationship. While remaining a sensationalist angle, the acting, especially of the two leads, the visuals and the direction define a unique viewing experience, unwatchable for some but in many ways more truthful than any mainstream romantic movie. “Audition” is in many people’s eyes one of the best accomplishments of its director in a body of work which now includes more than 100 titles. It shows the true nature of its creator, one who, despite all the extreme imagery, has continuously presented himself as a true romantic.