If you were to be asked to sum up the recent trend of Korean film in a sentence or two, the best line would be “the more, the better.”

Regardless of the genre, the specific formula of movie production dominates South Korean movie industry such as spending high budget, having many characters and revealing the secret in the last minute. Following this path, however, you will find that there is no room for the audience to discover the movie by themselves. A director intends everything, and eventually, the audience has no chance to appreciate the beauty of the film.

Director Huh Jin-ho’s ‘August Christmas’ stands in contradiction to recent fashion. Even if it is a movie shot twenty years ago, it still gives a great resonance with a simple story and minimal conversation. By removing the noisy situations that can be seen often in the story of the love of a terminally-ill man, you are able to become more sympathetic to the main character.

Christmas in August is screening at London Korean Film Festival

Jung-won who runs a small photo studio in the outskirt of Seoul is on the verge of death. But he does not get angry or frustrated, but spends his days the same as usual., developing films and doing house chores.

Da-lim, who is a traffic warden at the borough office, visits his studio and hurries him to make her photo as soon as possible. His condition is not very good, and he frets himself into a fit of nerves but apologises immediately with ice cream. After that, Da-rim becomes a regular visitor. Although not in a relationship, they spend time together, going to the amusement park, and drinking beer.

Despite his feelings, Jung-won cannot say anything to her because the time remaining is too short.

Eventually, Jung-won is hospitalized and cannot meet Da-rim. In front of his empty studio, Da-rim leaves letters and keeps on looking for him, but she cannot find him. Angered, she comes to the photo studio in the middle of the night and throws a brick at the glass. Da-rim rotates to another precinct.

Director Huh Jin-ho said that he got the motivation of the movie from the smiling portrait of Kim Kwang-seok, a famous Korean folk singer. Seeing Kim’s last smile, the director began to think about how people meet their demise.

To express his attitude toward life and death, director Huh Jin-ho carefully designed each behaviour of the characters in the movie rather than showing it through conversation. 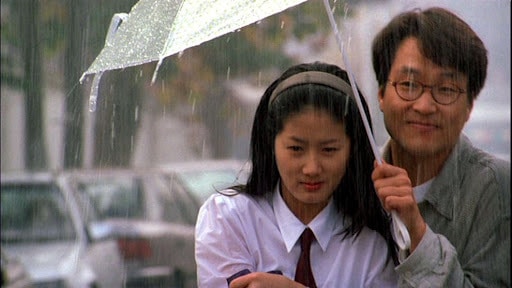 The director’s ideas are revealed through the characters. The fate of Jung-won is already decided in the beginning. But he does not deny it, he just accepts it resignedly. He shows his feelings only twice in the movie. This first one occures when he tries to teach his father how to use a VCR and a remote control. There is not much time for him, but his father repeats the same mistakes. You can actually feel Jung-won’s desperation when he shouts at his father without telling him the reason. The second when he drinks alcohol with his best friend. Unlike the silent nature of him, “Why am I supposed to be quiet?” he cries out with anguish.

You may have no chance to learn about his illness because the information regarding his disease is missing in the movie. However, through his unusual behaviours, you may guess about it and empathise him.

Da-rim adds a colour to the movie, which, otherwise, might have failed to deliver emotions. In the relationship between Jung-won and Da-rim, she is an absolute straight shooter and asks him out first. There is little information the audience obtains from conversations between them and specially in the last 20 minutes, the only sound you can hear is white noise around the town. 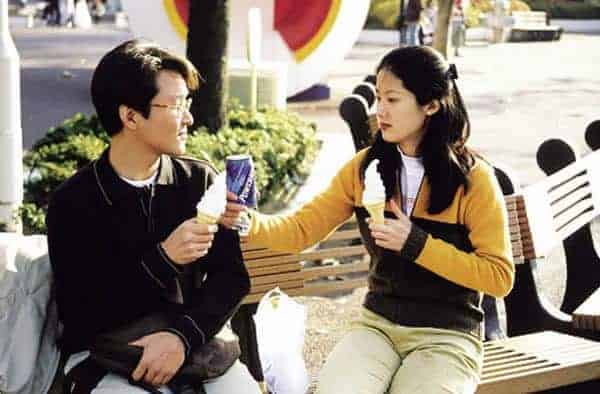 Long shots are often used in the movie to make the audience feel watching the stories of Jung-won and Darim from the side. Yoo Young-gil, the cinematographer, succeeds in capturing both space and characters with long shots and natural light. In the conversation, Yoo depicts both of them at the same time instead of change the shot according to the one speaking. It gives the audience a feeling of looking at the main characters from the opposite side. He uses tatami-angles to convey images in the eye level of the houses. He ended up filming without seeing the release. This is why the dedication he gave to Yoo Young-gil comes out in the movie.

We are now living in a society where people are encouraged to be fast, and complexity is considered as the top social value. However, the intense daily life without leaving the room to think does not allow the space where the individual ‘s emotions grow. You can have time to rewind your inner feelings by watching this film, which shows the beauty of minimal.