Pen-ek Ratanaruang is a name already recognized and respected inside Asian cinema culture. His filmography has gone from less to more, and lately, the quality of his work has reached a very appreciable level. “Samui Song” is the new film that he directs after “Headshot” from 2011, and he definitely maintains the good stylized quality that one had. It has been 6 years of patient waiting for us to see a new movie of his, but to be honest, it was worth it.

Pen-ek Ratanaruang is sometimes known for mixing different genres, like in “6ixtynin9” or in “Last Life in the Universe”, where he mixes drama with comedy. Here, he is more focused and tells the story in a stylized noirish way with some thriller elements, as it occurred with his previous film “Headshot”.

Samui Song is about Viyada (or Vi), a well-known soap opera actress who is married to Jerome, a wealthy Frenchman, with the duo living together in Thailand. Everything would be great for them if it weren’t for Jerome’s involvement in this cult where they have idolized its leader, played by Vithaya Pansringarm. One day, after Vi suffers a car accident and finds herself healing in the hospital, she has a casual conversation with a mysterious man named Guy, who indirectly suggests getting rid of her husband and her mistreatment due to this dangerous cult. 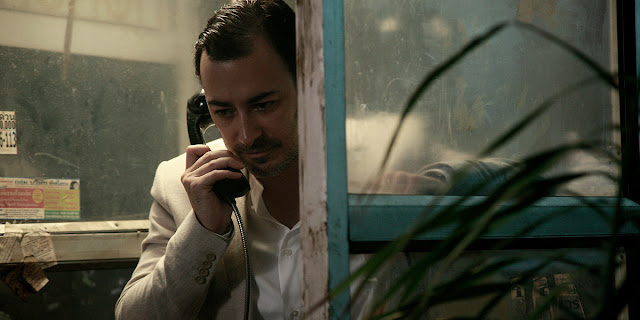 The director decides to follow the footsteps of the Neo-Noir style, and on this occasion take it to a more classic level. “Samui Song” is a brilliantly shot and directed film, narrated with wit and with a lot of attention to detail. Both the cinematography by Chankit Chamnivikaipong and the editing by Patamanadda Yukol is very cared and studied. Both aspects complement each other wonderfully because this is one of those films where the images narrate what is happening instead of dialogue. The pacing is very well measured and it doesn’t drag at any time. It remains firm and dynamic during the one hour and forty minute of the film. 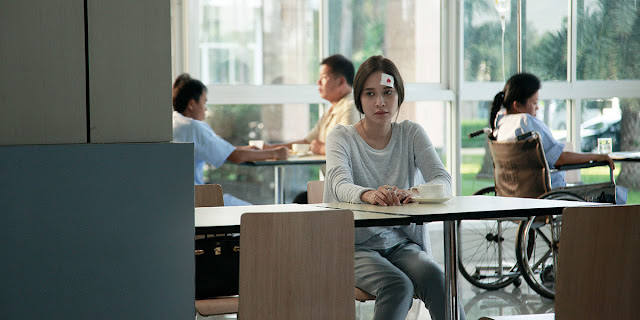 The film maintains this tense and dark atmosphere throughout its duration, and this is something that keeps the viewer in suspense and wonder , also thanks to the fantastic cinematography. The film plays a lot with depth-of-field and some close-ups. It is a very visual and attractive film, and along with a very interesting plot results in a great overall package.

The performances are all impressive, starting with our main protagonist Chermarn Boonyasak, who we notice a little cold at times, but that is a profile which is perfect for this type of noirish films. Vithaya Pansringarm and Stéphane Sednaoui are also good and convincing, but the star of the show is actually David Asavanond, giving a very classic and charismatic touch to his performance with this cheat character. It is clear that the actor is comfortable with the role, because he nails it in all the moments he appears on screen, and he adds a little touch of elegance and even humor to the film.

“Samui Song” is a neo-noir thriller with a very classic touch that will not disappoint  film lovers. Well directed, well narrated and well performed, “Samui Song” is a bet worth seeing and worth contemplating.