With the release of the mega-hit ‘Annabelle’ in 2014, a slew of imitators arrived from around the world to tackle the theme of the possessed killer doll. Indonesian director Rocky Soraya emerged in 2016 with his entry “The Doll,” and when a sequel emerged the following year, he decided to continue the franchise with this third entry spinning off the series into this new title doll.

After solving a deadly possession case, Maira (Luna Maya, from “The Third Eye”) and her husband Aiden (Christian Sugiono, from “Jakarta Undercover”) try to move on with raising his orphaned niece Vanya (Richelle Georgette Skornicki) who’s still lonesome for her mother. When they attempt to bridge the gap by presenting her with a special doll from his company, she takes to it instantly and begins to form a deep attachment to the object which does warm them to her, although the constant attachment to the doll begins to worry Maira. After several close encounters between them and the doll, she calls upon her friends Laras (Sara Winjayanto, from “The Doll”) and her husband Raynard (Jeremy Thomas, from “13: The Haunted”) to help send the demonic spirit tormenting the family away from their niece.

For such a maligned film, ‘Sabrina’ turned out to be rather enjoyable one. One of the strongest aspects here is the supernatural elements present. These are quite prominent in creating a wholly chilling atmosphere. The opening sequence of them rescuing the possessed woman in the house offers a nice start here, while the eerie sequence of the daughter searching for her mother offers up some nice imagery. Once this moves on to trying to drive Maira crazy, the movie provides some outright chilling sequences that work rather well. The common trope of a child’s toy being used for a ghost-finder throughout the house brings about some great scenes of her searching the house alone or interacting off-screen with what she claims is her mother, and are what really brings some great times to ‘Sabrina.’

This early setup for the film allows for more fun to occur in the second half. Already fully aware of something is going on, the film ratchets up the tension and scares with the explosion of supernatural activity. The fateful vacation trip to the tropical island is rife with incredible scenes, from the collection of shells along the beach, a traumatic burial in the sand where they get pulled in and then quickly buried, to a highlight reel montage inside the reception hall. From the piano ghost to the chase into the closet and coming back to include the final encounter with the husband. This extended and charged sequence makes for a truly chilling and creepy one that’s far better than expected. Once back home, the seance ritual to understand the situation, as well as the resolution of the opening confrontation, offer up the expected setup for the action-packed finale that really works with the strong rituals and ceremonies, presenting their battle with the demonic being around the factory where the doll is produced.

The cast here is exceptional and helps this tremendously. The lead Maira, played by Luna Maya, offers a fantastic performance as the woman trying to get in good stead with her niece and can’t, until she gets the fateful doll. Loving and compassionate while at equal turns convincingly terrified, her worried mother act is very well-done, engendering plenty of sympathy until the finale, where it allows her to pull off a spirited double-switch that’s fun and tremendously engaging. Her husband Aidan, played by Christian Sugiono, tends to be more on the sidelines as the majority of the focus is on Maira, but he acquits himself well in the action scenes and stays by his wife’s side regardless of what happens to her. This makes him a fine support for the other husband-and-wife team involved here, Sara Wijayanto as Laras the mystic and Jeremy Thomas as Raynard who know how to perform the sacred rituals and actions involving the demon tormenting the family. They’re great to watch and handle the action scenes rather well, leaving a positive overall impression on nearly everyone involved in the film. 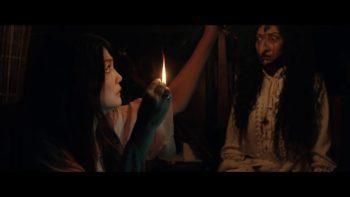 While these elements work nicely for ‘Sabrina,’ there are a few problems involved. The main issue to contend with is the tolerance for cliches present, since the film plays out almost exactly like contemporary American movies involving this particular setup. It’s not a surprise at all as to what’s going on in the script, because it rips so many scenes and tropes off from those films. These scenes include writing off the child’s stories of seeing the deceased around them, openly admitting to having disobeyed her instructions because of her mother and the disbelieving spouse who won’t listen to reason due to the innocence of the child involved. Along with a favorable attitude towards jump-scares to pay off it’s tenser moments, these are brought over from numerous other films. Likewise, the film’s reliance on explaining everything through voiceover flashbacks gets rather tedious with it jumping around in the timeline and does offer up some confusion as to what’s going on in the moment. This also causes the film to go on a little longer than it should with the overlong final battle. Otherwise, there isn’t much to dislike here.

Despite a lot of negatives out there for the film, there’s a lot to like here as it features a great atmosphere and some strong horror elements that make this a watchable effort. Give this a look if you’re into these heavy supernatural elements in your horror films or looking for a fun streaming foreign effort who aren’t bothered by its flaws, while those looking for something beyond just heavy cliches of other films should heed caution.