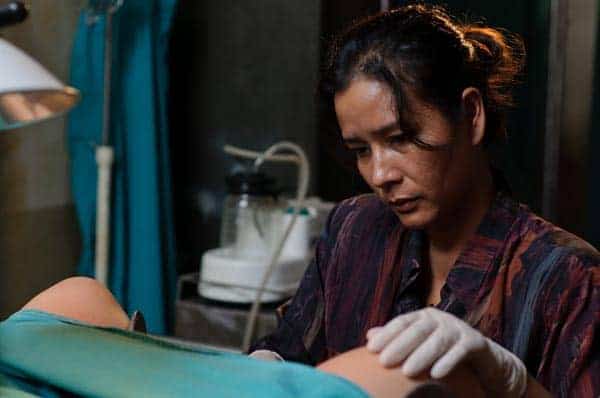 Based on one of Thailand’s more gruesome true stories, this ripped-from-the-headlines genre effort concerns the scandal of the discovery of 2,002 fetuses in a Bangkok Buddhist temple that had come from illegal abortion clinics. A biting commentary on preventing unwanted teen pregnancies in today’s Thai society, veteran comedy director Poj Arnon crafts a serviceable thriller now available on Netflix. 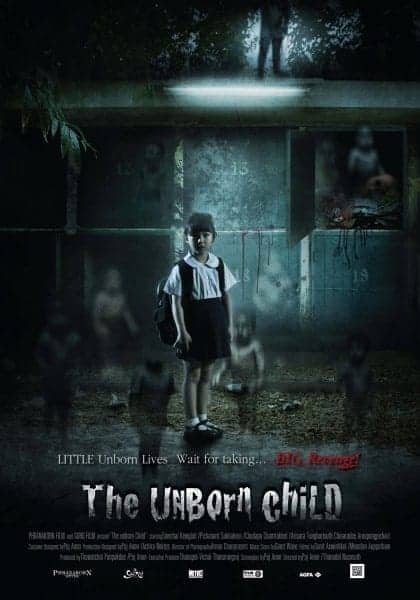 After coming home from work, photographer Trai (Somchai Kemglad, from “Opapatika”) and his schoolteacher wife Pim (Pitchanart Sakakorn, from “The Victim”) begin to grow concerned about their daughter Yaimai (Chinaradi Anupongphichart) who is fond of venturing to a mysterious temple nearby. One of her local students Bam (Peerawit Boonark) starts to worry about his girlfriend Kam (Chudapha Chanthakhet), especially when she announces she’s pregnant and wants an abortion from the same place she did years ago, which starts them on a similar path of hauntings as the family. Soon, both sides converge on a specific temple in the city as a result of illegal abortions performed by Charisa (Arisara Thongborisut, from “Yes or No”), and set out to right the wrongs brought about by a gruesome secret buried in the temple.

From the very start, ‘The Unborn Child’ proves to be quite an enjoyable topical effort. Among it’s more entertaining aspects is the manner in which it touches on its topical references. The subject of abortion caused by an epidemic of teen pregnancies is hammered into us from the very start, as the shriveled corpse of an aborted fetus is waved at the camera before thrown into the trash, unceremoniously. Likewise, the scenes with the reporters making the connection before the dead bodies and the spate of illegal abortions create a rather intriguing viewpoint. That this procedure to get rid of them is so commonplace the act is considered routine and treated flippantly is quite shocking and creates a strong commentary on the youth.

As well, that there’s a rather thrilling supernatural angle to play off is wholly appreciated. Director Poj Arnon creates a fine atmosphere through the lowest possible approach, hearing the sound of a baby’s voice out of nowhere. That the characters react to its presence makes it genuine, and despite the playful nature of the giggling, there’s a decided creepiness to those scenes where it appears to lead their daughter into precarious situations. From drawing her away to the temple, causing the daughter to go play on a swing-set unsupervised or getting her to play on the stairway ledge in the apartment, there are some rather creepy scenes in the film.

Other creepy scenes feature more traditional scare attempts. Dream sequences featuring bodies dripping blood from birthing locations, characters claiming to see spirits standing behind others in pictures or video or even catching ghostly figures lurking around, offer up some rather chilling moments. As well, the scenes at the temple showing the disposal of the corpses in the dead of night, where nothing goes right for anyone, set the stage for a truly enjoyable final act that generates several impressive supernatural attacks. The various encounters within the apartment building or Sa, the actress we’re following, ,are quite terrifying and set the stage for the revelation at the end which is far more haunting and devastating than anything else in the film. These manage to hold this one up overall.

This one does have a few issues. The biggest problem is the fact that there’s just way too much going on in the plot written by director Arnon to keep anything straight as for what’s happening. It takes way too long before we’re aware that everything happening is occurring within the same universe as it randomly hops around between these stories, including the random addition of the actress where we don’t even get the connection until the end and merely assumes we know that as the film never explicitly tells why she’s involved in the storyline, all of which means it takes way too long before it really gets going. The other issue is some rather wonky CGI present in the attacks that don’t need to be there as this had worked far better without much of that involvement and the scenes stand out in contrast because of that.

While ‘The Unborn Child’ does get a few minor things wrong with the scattered storyline and some bad effects work, there are more than enough to like elsewhere, as it tackles a major theme quite well, in addition to some solid haunting scenes. Give this a shot if you’re into this kind of genre effort or find yourself intrigued by the subject matter, while those that tend to prefer more coherent material should heed caution here.