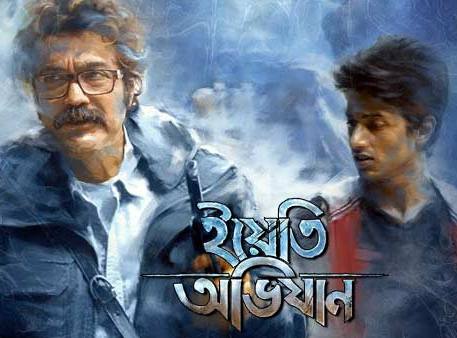 A director dreams a movie before it’s been painted on the canvas of silver screen. That dream could portray unrevealed thoughts,  hidden statements, undisclosed wishes and also can portray the images of any childhood hero from the pages of novels. Director Srijit Mukherji is back again with Kakababu and Santu  in “Yeti Obhijaan”, his  second  outing with the adventurous duo after a  hugely successful money spinner “Mishwar Rahasya” released in 2013.

Kakababu (Prosenjit Chatterjee) and Santu (Aryann Bhowmik), the adventurous duo are back again in search of the giant beast Yeti, in the snow covered  Gorokhshep plateau in Nepal.  In this expedition they get the help of local sherpas like Mingma and Norbu. The narrative revolves around the unraveling the myth and mystery of Yeti and the incidents associated with it. The movie involves two important characters, Jung Bahadur Rana ( Jissu Sengupta) and Chitrangada Verma (Bidya Sinha Saha Mim) in the second half to spice up the thrill and suspense .

“Yeti Obhijaan” is adapted from Sunil Gangopadhyay’s famous novel “ Pahar Churaye Aatonko”. And it’s always difficult to portray an already well accepted novel on silver screen. Srijit Mukherji had a difficult job in hand to satisfy the thirst of the audience for out of book thrill and suspense.  And it has become tougher for the director as the narrative revolves around a fictitious entity like Yeti. Also it’s very difficult to maintain the suspense in a thriller or adventurous movie as compare to any detective narrative as in a detective movie the director has the privilege to reveal the mystery at the end. In  “Yeti Obhijaan” the mystery unfolds with the turns and twists of the expedition, demanding a tighter and subtle script.

But the director takes a different path in the movie highlighting the visual appeal and blending the songs intelligently with the narrative. The movie has been shot in snowy locations of Switzerland in difficult conditions but that made it look real, convincing and believable throughout.  Using helicopters and long shots depicting the snowy mountains has been a treat to watch. The mark of blood coming out from injured Mingma has been captured brilliantly by the director. Art direction is convincing but I feel , some of the scenes inside the cave ( shot in Borra caves near Araku) or the doom could have been planned in a better manner.

Prosenjit Chatterjee as Kakababu is brilliant and the seasoned actor puts up another powerful performance. But I thought Aryann Bhowmik as Santu is a big let down and he misses many subtle expressions which are required for the character and needs more maturity. Jissu Sengupta also lives up to the expectations and Alexx O’Nell as villainous Caine Shipton is convincing. But I thought the surprise package of the movie is Bidya Sinha Saha Mim as Chitrangada Verma.  She looks absolutely stunning in every frame and it’s difficult to keep eyes out of her and that’s been brilliantly captured and presented by the director.

The audience has different expectation from every film and that makes the life difficult for any director. Srijit Mukherji has been one of the best directors in India in recent times for his experimental movie making approach with a distinct style.  And it’s been imprinted on his past creations like “Jaatishwar”, “Nirbaak”, “Hemlock Society” or “Chatushkone”.  He loves to experiment and  “Yeti Obhijaan”  is also an experimental movie considering the filming of the major portion is done in real locations among snowy mountains.  Kudos to Srijit Mukherji for his bold and experimental approach, considering the budgets of the regional film industry in India and to the entire team of “Yeti Obhijaan” for making this experiment successful.