It’s sometime in the 90’s (according to Miike – year 199X), and the Osaka’s shabby neighborhood is impatiently waiting for the live transmission of the match of the year from the Tokyo dome – a mixed martial vent featuring the Bantam-weight boxing champion Kazuyoshi Tamai (Kyosuke Yabe) and the wrestling champion Takeshi Hamada (Kazuki Kitamura, who plays Sabato Kuroi in “Blade of the Immortal”). It is announced that it will be a dirty game with no rules, with all tricks allowed, a reason more for the crowd to get frantic about it. As men start placing bets on the winner, the fighters are preparing for their first clash ever, making sure their hidden trumps will cause the painful damage to the opponent. 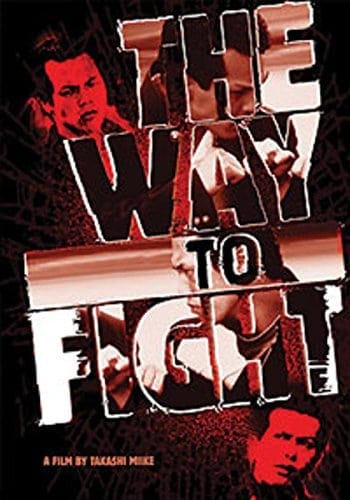 Based on Seijun Ninomiya’s novel of the same name (adapted by Masa Nakamura) which was inspired by the true Japanese fighting legends Hidekazu Akai and Akira Maeda, Miike Takashi’s “The Way to Fight” is the closest the director has come to the social drama in a long time, although he couldn’t help turning it manga-esque. Five minutes into the film, when the story bounces 20 years back into the past of both men who spent their anger-loaded youth in Osaka, the narrative becomes every inch Miike, with aberrant school milieus, abrasive nervous youth and deranged families. And there’s a ramen soup involved, spiced by an accidentally cooked rat, which becomes a popular delicacy, with its “secret” of course never being revealed to the customers.

As much as it is improbable that such soup was ever cooked by the future boxing star, so is the depiction of two rivalling schools Tennan and Naniwa West High that would scare the hell out of any parent with a bit of love for their kids. It’s charming in a way, all that staged anger that punishes any form of clumsiness or weakness, and it makes sense to turn it into mockery to underline the whole meaningfulness of daft violence. The youth projects their background, and the fear of becoming exactly the same as their parents turns them to their almost exact copies. While Takeshi tries to spend as little time at home escaping the company of his drunken father, Kazuyoshi gets beatings by his demented grandma, and his best friend Toshio lives in fear of inheriting his father’s mental illness. Fun fact is that Takeshi Miike appears in a small role of the guy who falls victim of Toshio’s rage that finally explodes when he witnesses mean gossip about his father, and we see the director bleed slouched on the street in front of the restaurant where the incident had happened (spoiler alert! – the master sports a peroxide wild mane!).

Slapstick blends with social reality in this lampooning account of a two-decade long frenemity between two fighters. Set against the backdrop of the socially weak class of Osaka, the plot follows their perpetually shattered attempts of arranging a one-on-one fight. Even when the meeting finally happens, it gets disrupted by the chaotic mass-fighting of the gathered audience.

Barely anyone is normal in “The Way to Fight”, and we see girls applying the same terror methods to the weaker, smacking their opponents faces and sending feet flying to their bellies. It’s all about showing the physical strength and marking the territory.

In the process of making life-changing decisions, Takeshi and Kazuyoshi come to the similar conclusion that their demons can come useful in escaping life in Osaka. They both turn to a local karate teacher (Rynosuke Sakai) who owns a little dojo. The teacher is hesitant to let the problem-makers attend his class, but decides to risk it with Takeshi, who is ready to become submissive. Through this booming friendship, we finally find answers to the question who Takeshi genuinely is, and it’s the finest developed, reality-close part of the storyline.

This action-packed film could have been shorter, with the script more swiftly abridged, and with the performance by Kyosuke Yabe as the air-headed Kazuyoshi slightly less over the top. But all in all, it is one of the most accomplished works by Takashi Miike from the 1990s, and the understanding the cinematographer Hideo Yamamoto shows for the unattractive industrial landscapes and depressing workers’ milieu, gets beautifully captured in dusty colours.

Badass Red Band Trailer For Takashi Miike’s ‘Blade Of The Immortal’ Out!