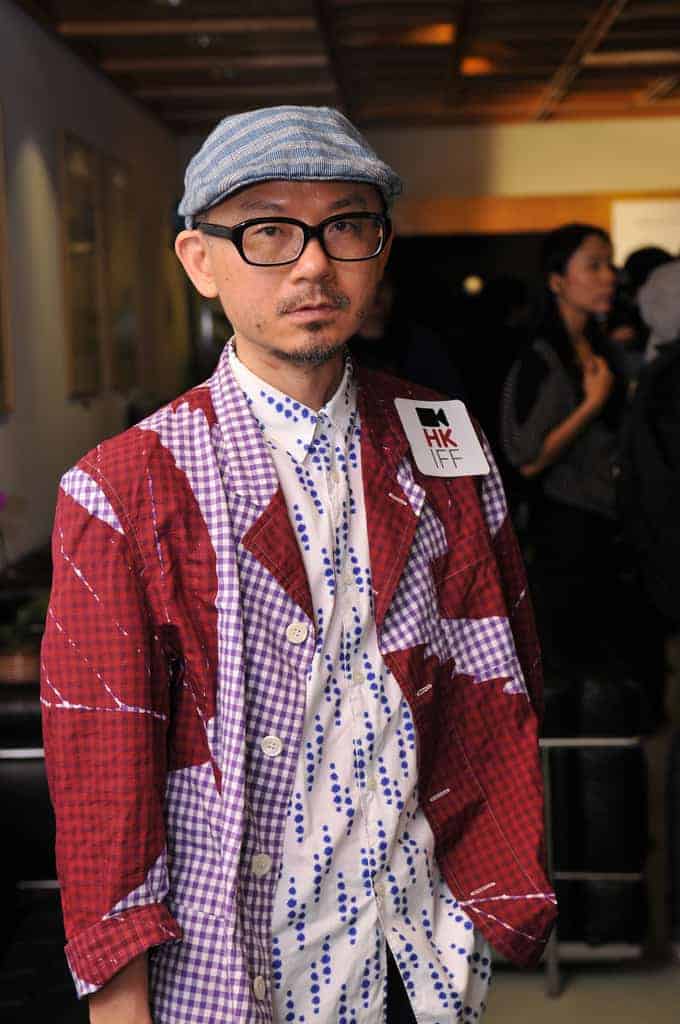 CHEN Hung-i is a graduate from the National Taiwan University, Department of Philosophy. The commercials and music videos he directed won several prizes and also his feature films – including his debut Candy Rain (2008) – were awarded multiple times. He received an award for Best Director at the Taipei Film Festival. The Last Painting (2017) is his fourth feature film.

The interview was made on the occasion of the screening of “The Last Painting”, at International Film Festival Rotterdam (IFFR)

We talk to him about his career, “The Last Painting” , politics, trans people and many other topics.

You also direct commercials and music videos. What are the differences between these two mediums and movies? Which one do you enjoy more?

One is that people give you money to make something, and the other is to find money in order to make it. You need to make a good enough film to persuade people to buy tickets and watch it, but commercials and MV can be seen everywhere anytime.

I think I like them both; they are all great fun for me. But now I am more focused on making money from one medium so that I can put that money in creating the other.

The Last Painting deals much with politics and activism. What is your stance on these issues? How is the political situation in Taiwan at the moment? Particularly the aspiring politician in the film betrays Yang Chieh’s trust and hope, since he just wants to have sex with her, even using political terms to persuade her. Is this the image you have of politicians, and is that scene a kind of allegory?

I think Politics is dirty. But it is inevitable. So, in order to find some solution or just to find a way to make it better, we need to get into the dirtiness and get messy. For me, that’s the only way to help or change any situation.

For the political situation in Taiwan, I think it’s like the film I shot, you can see a lot of conflicts and face-offs. It’s not just the conflicts within Taiwanese politics, but also our status with China. And all these conflicts and issues are almost impossible to find a way/solution to solve. Art and Politics  are like the painter and the student in the film, and Nana, who couldn’t find the answer if he wants to change his gender or not—it’s difficult to find right or wrong, black or white, better or worse.

We did a lot of research about the event we see in the film (what the politician does to Yang). There are indeed, many similar cases happening in Taiwan. We put this in the story because we wanna discuss if we can tolerate the moral flaws or incomprehensible behaviors of a person because he has tremendous talent and great vision towards the bigger issue (even to change the society)?

What is your opinion regarding the connection of art and politics? Do the artists have an obligation to deal with political issues?

I think it’s hard to really separate art from politics. I think all the artistic creations are political, because politics is everywhere.

Yes. I think artists should care, and use his/her creations, work, or any art form to react, recreate, or reflect political issues.

The narration is somewhat abstract, not linear. Why did you choose this style?

This is sort of my style. All of my movies are somewhat abstract when it comes to narration. And I think, to reflect the reality of the world or society, linear narration is a bit too simplified. The real world is way too complicated, too messy and too hard to describe all at once in one direction, in my opinion.

I have to admit, I did not understand the connection of the story with the 7 sins. Can you elaborate on that?

7 sins are not real crimes, but phenomena. Or shall we say, behaviors/desires. They are just like real human desire/characters, they are just weaknesses of human beings. So we are talking about politics here in the film, and politics happens when governing a group of people. So eventually, it’s about “people”. We, human beings, cause all of the mess, conflicts, or terrible things- with these desires/flaws. Some would even come to a conclusion with 7 sins. Also, I myself am Christian, and these concepts are inspired by my study of the Bible as well.

The film features paintings by Jhong Jiang Ze, who also loans his name to the protagonist. How did this collaboration occur?

When we were finalizing the script, we knew that we needed to find a real painter/artist to help create the art in the film. So we found Jhong. And after we started working with him, seeing his artwork, and in many meetings/discussions, we gradually collaborated these two into one- the real painter with the lead actor in the film. We borrowed his personality, his way of working, his style of art, and shaped the character in the film with more life, realness, and humanity. Eventually we can sense some great similarities in them now.

The characters in the film are very different. Jhong is a disappointed artist, Yang Chieh tries to get away from her rich family and change the world, Nana a trans person who searches for an identity and San San a kind of a femme fatale. Why did you choose to use such different characters in the same story? In general, what inspires you to conceive your stories and your characters?

I think, they represent one condensed society, a reflection of current situation in Taiwan:

Jhong is a failed activist, who escapes from reality to his art world (almost a prison) as a disappointed artist. He’s too sensitive and fragile, couldn’t bare the reality, and eventually, brought himself to mental institution.

Yang represents the new possibility of the younger generation, she has this ’I want to be independent (respond to those who want to announce the dependency of Taiwan)’ fire in her, who wishes to change the world with her passion. This romantic ideal is almost too naive, and eventually leads her into the tragic ending.

Nana keeps his status quo to the end of the film, just like the situation we see nowadays in Taiwan. He tries to keep it the way it is, so he won’t get hurt more. It is the majority of Taiwanese people’s mental state. For me, this is the saddest part. WE can’t really change ourselves even if we have the desire—there’s no other way around. What can you choose? To be a male, or a female? No matter what he does, he’d hurt himself mentally and physically.

San San, in a way, is the healthier kind, she’s practical. She’s not the idealist, and not a sad artist to hide in his own world, she’s actually stronger, and she chose to survive. She understands what she needs to do to stay alive, and knows better what she wants. And you can also see the motherly element of a woman, who protects her love and would save her love with all her might.

This same variety applies to the cast. Why did you choose the specific actors, and in general, what do you search for in an actor? How do you guide them in the film?

JC ( The painter in the film)- I worked with him before for my music video. And I felt he fits the character.

Chang(Yang in the film) was recommended by one of my producers, who worked with her on another film. We met and talked and there she is.

Kiwebaby (Nana in the film)- we did some field research: interviewed, and just met many transgender people, and ask around the community. We met him during the process, and eventually we felt he’s the best fit.

Wei-Yi Lin (San San) is the co-writer/producer’s previous student in National Taiwan University. They kept in touch and she recommended her to me, and we met a couple of times, discussed the character, and we felt she helped shape the character a lot.

Overall, I always feel it’s like fate. We come together to make these unique roles in a unique story.

I think it’s extremely important to find an actor with some unique qualities. So in general I don’t like “Normal-ness”. If you are average or plain, I find it hard to work with you. So, with special personalities or interesting qualities, I feel I can guide him/her or even push him/her to a state no one’s ever seen before, and then we see the real potentials of an actor.

Except for Kiwebaby, the three other actors all have theatre training background. So, we spent a lot of time in rehearsal room, we did a lot of work before we arrived at the actual set. To have them ready for about 80%, can truly help in guiding them into the scenes faster- especially with those intense, dramatic events.

But I work differently every time in every movie. I am still seeking the ways of working with actors.

We really wanted Nana’s story to be as real as possible, so we did a lot of research and interviews. Kiwebaby was one of them. After talking to him, we strongly felt that his story and his personality are closer to what we want in the story, so we changed the cast (originally we cast a theatre actor to play Nana). So yes, you can say that what Nana faces in the film is similar to what trans people have to deal with, in Taiwan.

While we are in the most miserable point, the moment of despair; we seek assurance, company, or simply an escape. Yang and Nana are best friends; they naturally come together when they are facing hardship. The first kiss was supposed to be a warm, gentle assurance form Yang, as she sees his sufferings and pain. Also in her mind, Yang is saying goodbye (we assume she’s decided to commit suicide.) But during that natural moment, a line was crossed. And by that shocking moment of seeing male erection, questions and doubts occurred, such as ”Do I desire him because he is male? Or  gay?” “Why do I desire her, am I really a man? Do I want to be a woman, then? ” When the thoughts creep in, you see them break the pure desire of seeking shelter, and Nana runs off.

What kind of movies do you like to watch, and which are your favorite filmmakers?

Make another movie is my next step. I would like to adapt stories from Shakespeare.

To make as many movies as I could, would be the plan for life.

Interview with Kazuo Hara: “While Reiwa Uprising is finished, my search for essence will continue.”

Interview with Yoon Dan-bi and Choi Jeong-eun: I would like to make a film that stands the test of time