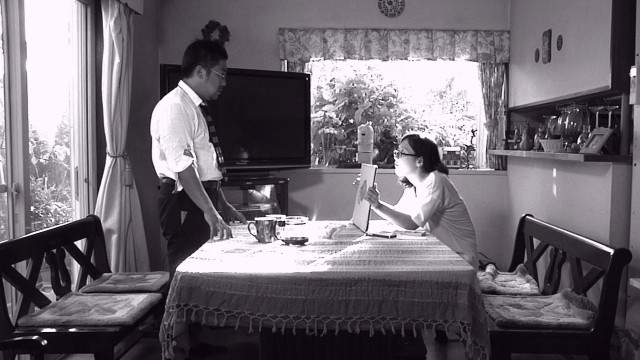 It is always interesting to watch films about death, particularly regarding the approach each director takes to this rather depressing (in its premise) theme. Kenji Qurata’s one could be described as focused on lightness and entertainment, without, though, stripping the subject of its seriousness.

The black and white film revolves around a married couple, although the wife has been diagnosed with terminal cancer. Her husband is set on fulfilling any last wish she has, and she sets on a rather unusual one: tracking down a tsuchinoko snake, a creature of Japanese folklore, which does not seem to actually exist. The husband however, grants her wish and the two embark on a series of trips in the country and the woods, in order to find  the creature. After an unsuccessful encounter with a tsuchinoko specialist, who seems to know just what the legend says about the creature, the two continue on their own, despite the wife’s deteriorating state. During these trips, Qurata also presents their life story through flashbacks.

Kenji Qurata directs a sensitive film that deals with a rather dramatic topic through an approach, however, that only fills the viewer with hopefulness, as it focuses on love and the happiness people can offer each other. This approach and the fact that humor is one of the main ingredients of the narrative, results in a very entertaining short that carries its cheerfulness for the whole duration.  Hisaki Kato’s music, the editing, the acting (particularly Shingo Matsuoka’s caricature presentation of the specialist) and Hiroaki Sugeno’s cinematography all implement this approach, through a directorial effort of a man who seems to know exactly what he wants to do and how to proceed about it. Special mention should be given to the last scene, in essence a tribute to “The Big Lebowski”.

Masayuki Maekawa as the husband and Shio Murakami as the wife portray their characters in perfect resonance with the film’s aesthetics, in a laconic style much similar to the one of silent films.

“Every Time We Say Goodbye” is funny and meaningful at the same time, and of the best shorts I have seen during the latest years.